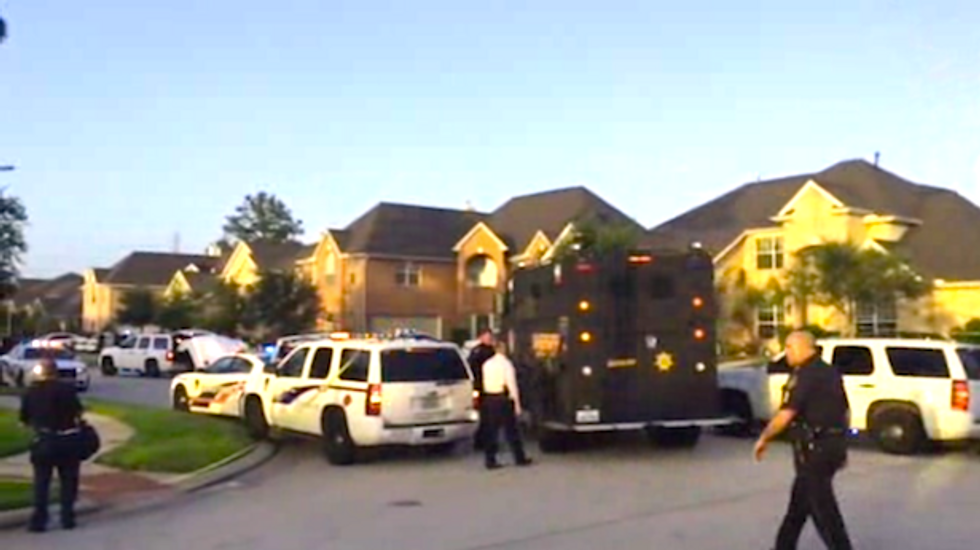 A gunman shot six people to death, four of them children, in what appeared to be a domestic dispute in a Houston, Texas, suburb late on Wednesday then fled the scene before surrendering to police after a standoff, a police official said.

Harris County Constable Ron Hickman told reporters after the suspect's arrest the victims ranged from 4 to 40 years of age, and preliminary information indicated two of the dead were children adopted by the gunman and his estranged wife.

Hickman added that the violence stemmed from "obviously a domestic situation that went south, probably a divorce or separation."

The victims were two boys, ages 4 and 14, two girls, ages 7 and 9, and a man and woman, ages 39 and 33, a police spokesman said. The shooting occurred in the middle-class Houston suburb of Spring.

A 15-year-old girl who also was shot but survived provided police with the name of the suspect and said he was on his way to her grandparents' home. This enabled officers to head him off before he arrived, police said.

A constable at the scene told Reuters the 15-year-old had said the shooter was a family member. He said it did not appear he was the father of the children.

CNN citing Harris County Sheriff's Office spokesman Thomas Gilliland said all of the children were either biological or adopted children of the suspect. Reuters could not independently confirm the report.

Police did not release the names of the suspect and the victims or a possible motive. He could be charged as soon as Thursday.

"We don't know why this happened," nearby resident Paul Anthony Slawinski told Reuters. "This man, his wife, and children were the definition of compassion and charity."

Another neighbor, who lives across the street, described the family as "close-knit."

"It was a Mormon family," the woman said. "They were very sweet and their kids were very shy. This is a sad, sad day."

After the shooting, the gunman led police on a nearly half-hour pursuit capped by a standoff in a residential cul-de-sac a few miles from the scene of the slayings.

Streaming video footage from local television station KTRK showed the suspect's car sandwiched between two trucks where the chase ended, with more than a dozen police vehicles nearby.

After a four-hour interlude in which the suspect was seen placing a gun to his head, he walked out of the vehicle with his hands raised, then laid down on the ground to be taken into custody.

Five of the victims were found dead on the scene, the Harris County Sheriff's Office said. Two others were flown by helicopter to an area hospital, but one, a child, later died while the other was listed in critical condition, the sheriff's office said.

Watch video from the scene posted online by the Houston Chronicle: