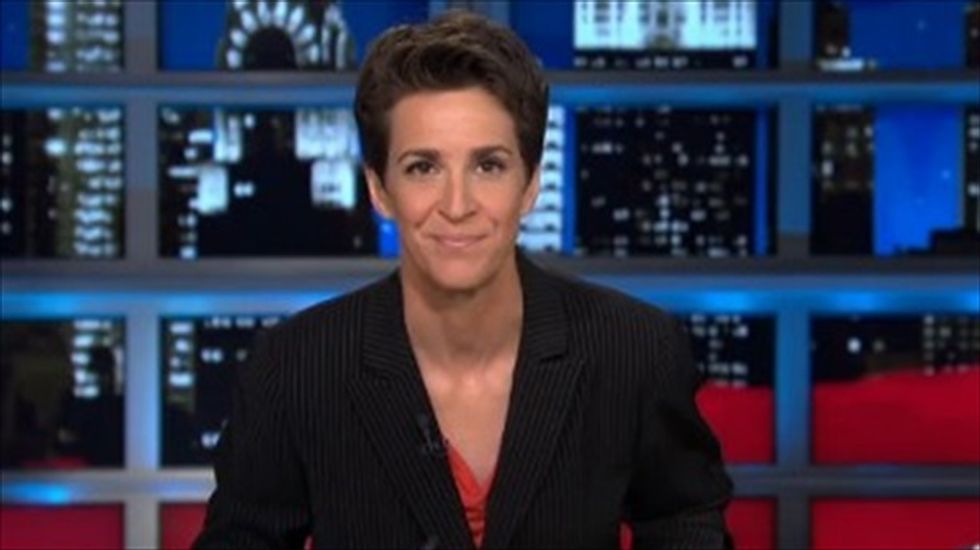 In the wake of the devastating explosion in West, Texas, MSNBC host Rachel Maddow said on Monday, state Republicans did nothing -- except make it harder for the public to know what potentially dangerous chemicals are being stored by industry forces.

"The official advice from the Republican-controlled Texas state government to the citizens of that state is that Texas residents should go door-to-door in their communities trying to surmise whether or not there might be any dangerous chemicals stored in any facilities nearby."

Specifically, she said, Attorney General and GOP gubernatorial candidate Greg Abbott issued that directive not long after holdings by conservative billionaires Charles and David Koch began donating to his campaign. As The Dallas Morning News reported, Abbott's campaign has received $50,000 in donations, as well as another $25,000 from Charles Koch's son, David. Abbott was also flown on a Koch Industries jet to a Koch-sponsored event introducing candidates to more wealthy donors.

Abbott, who is running against state Sen. Wendy Davis (D), began getting the donations, Maddow said, in September 2013 -- four months after the blast in West, which injured more than 200 people. Koch Industries dismissed the Morning News' report as "a vague and improbable quid-pro-quo 'linkage.'"

Subsequently, she explained, Abbott scrapped the state's public database of dangerous chemicals being housed at any given time in a May 2014 ruling. While businesses must still report that information to the state, Abbott decided, officials "must withhold" that information.

When asked to explain his rationale, Abbott told reporters that residents were free to "drive around" and ask companies in person, or via email, for that type of information. Later, a spokesperson for Abbott was quoted as saying that local fire departments can also withhold it, since they were considered a "governmental entity" under Abbott's ruling.

Abbott's decision, she said, effectively removed one more tier of regulation from a state that already does not require companies to have sprinklers or many storage provisions of any kind for chemicals that -- as the "apocalypse" in West demonstrated -- can actively endanger communities. That lack of oversight, she said, can be traced to outgoing Gov. Rick Perry (R).

"Rick Perry is going to run for president again on the basis of 'the Texas miracle,' where he says things like not having any zoning laws and not having any fire codes, those are the things that make Texas great, and we should elect him president because he will apply 'the Texas miracle' to the whole country" she said. "And Greg Abbott is the man who's running to replace Rick Perry."