Meet Ronda Rousey: The woman who shattered the UFC's glass ceiling with an armbar 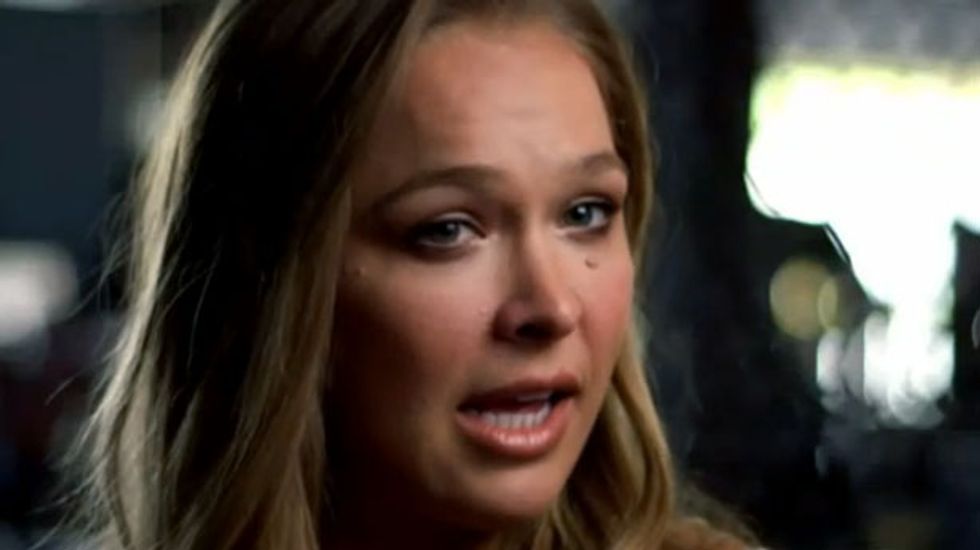 ESPN's Nine for IX recently published a mini-documentary exploring the meteoric rise of "Rowdy" Ronda Rousey -- the undefeated mixed martial artist who paved the way for female fighters in the Ultimate Fighting Championship.

UFC President Dana White said women would never fight in the octagon. Now he says that Rousey is the UFC's top star.

"She's the hugest superstar," White said in February, according to Yahoo News. "I'm going to go out and say she's the biggest star we've ever had."

Eddie Bravo, a master of Brazilian Jiu Jitsu, recently said Rousey had the best armbar in the world of mixed martial arts.

But Rousey isn't only a star in the UFC. She is also taking on Hollywood. Rousey will appear in three upcoming films: The Expendables 3, Fast & Furious 7, and Entourage.

"When I was a little kid, I wasn't into Snow White or Sleeping Beauty or the little pretty princesses that are waiting for someone to come save them," Rousey says in the video. "I was always taught to not be that dependent chick."

Rousey's mother, AnnMaria De Mars, became the first American to win a gold medal at the World Judo Championship in 1984. Rousey herself started training in judo, a martial art that emphasizes takedowns and joint locks, when she was just 11-years-old.

"At home, De Mars sometimes woke Rousey up in the morning by trying to catch her in an arm bar -- the lesson was to always be prepared," The New Yorker noted in a recent profile of Rousey.

Following her mother's footsteps, Rousey eventually became the first U.S. woman to earn an Olympic medal in judo in 2008 at the age of 21.

But she became disillusioned with her judo career, and decided -- like many of her male judo counterparts -- to start a career as a mixed martial artist.

"Everyone discouraged me from doing MMA," she explains in the video. "Everybody did. None of the guys I trained with -- even the guys who said I would do really well said not to do it."

Her mother also thought it was a stupid idea -- comparing it to seeking a career as a competitive knitter. There was simply no money to be made as a female fighter.

However, Rousey convinced White to allow her to fight against Liz Carmouche in the UFC in February of 2013.

"I'm notorious for saying that women would never fight in the UFC," White admitted. "Then I met Ronda Rousey. Literally the day I met her, I was convinced that I was going to let women fight in the UFC."

"I was blown away by the backlash," he added. "You know, 'women can't fight, this is ridiculous, this is a slap in the face to the sport.'"

She ended up winning that fight with an armbar, and has been undefeated ever since. In her last fight, Rousey knocked out her opponent in 16 seconds.

"Ronda has made it easier for other women to go into MMA and I hope that in some way it will be part of that bigger push where you see more and more women -- whether it is in mixed martial arts or technology or whatever field it is -- refusing to wait their turn, refusing to stay in their place."