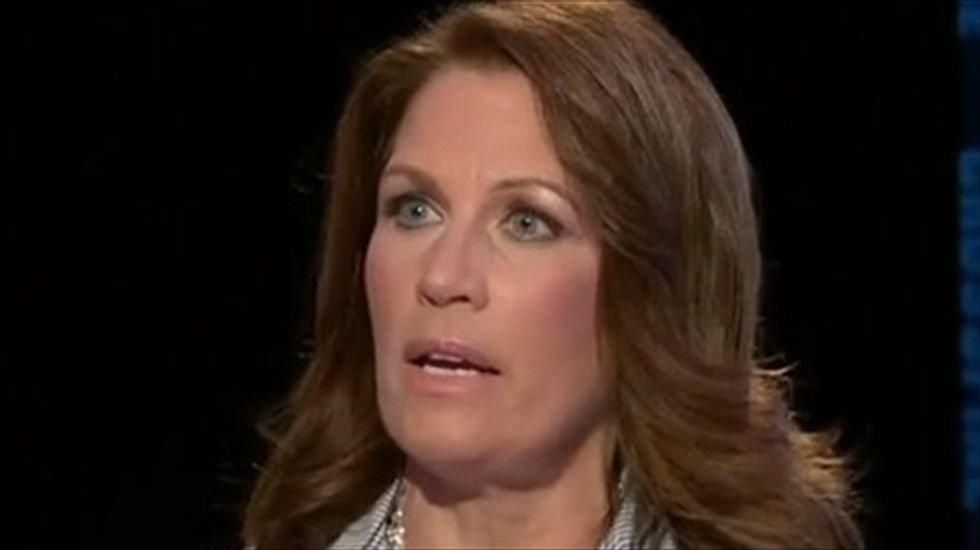 Outgoing Rep. Michele Bachmann (R-MN) derailed a CNN discussion on Tuesday about the thousands of undocumented immigrants arriving in the U.S. from Central America by calling them "invaders" and linking them to at least one rape case and an auto accident from six years ago.

"Foreign nationals that have come into the United States are between 300- to 500,000," Bachmann told an incredulous Crossfire co-host Van Jones. "My heart is broken for a female college student in Minnesota who was raped, murdered and mutilated by a foreign national who came into our country. We had a school bus full of kids in Minnesota -- four children were killed on that school bus because an illegal alien driving a van went into that schoolbus."

"There are lines that can't be crossed here," Jones responded. "I'm sorry, congresswoman. Are you gonna scapegoat children for the crime of this despicable person?"

While it's unclear which rape case Bachmann was referring to, the crash she alluded to was likely the 2008 accident that resulted in the deaths of two 9-year-old boys, a 12-year-old boy, and a 13-year-old boy riding on the bus. At the time, several conservative media outlets seized upon the fact that the driver of the van, 23-year-old Alianiss Morales, was an undocumented immigrant to criticize U.S. immigration policy.

"My tears are crying for the family members who lost four little children on a school bus in Minnesota," Bachmann continued, before ceding the floor to Jones for a second.

"We should stand with those children, but we should not scapegoat every one of these kids for that despicable crime," he said. "You know better as a congressperson than to lay at the feet of these children the acts of a despicable criminal."

Bachmann, who has taken 23 foster children into her family, also described the increase in "unaccompanied minors" primarily from El Salvador, Nicaragua and Honduras as an "invasion."

"We have foreign nationals who are coming across the border from countries like Yemen, Iran, Iraq," she said.

Watch the discussion, as aired on CNN on Tuesday, below.