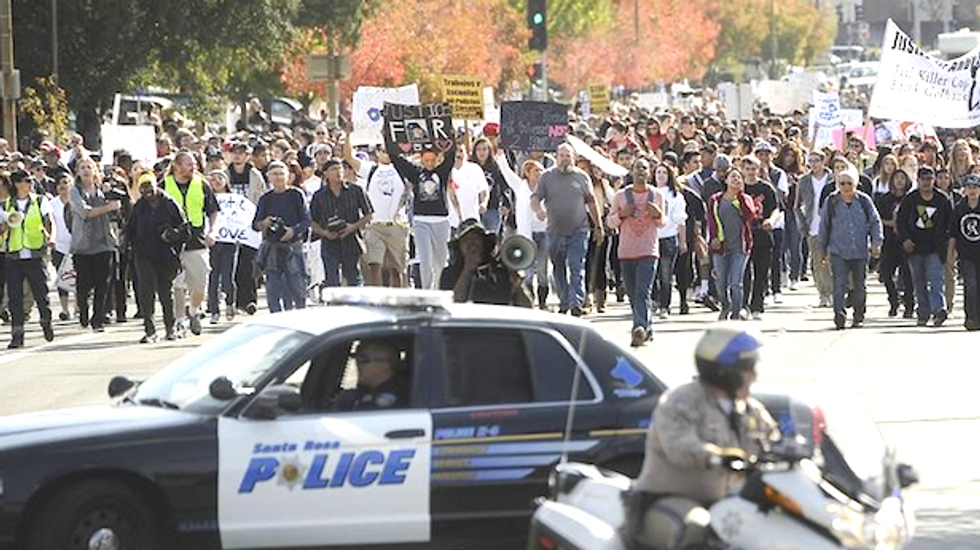 Northern California prosecutors have decided against bringing criminal charges against a sheriff's deputy who shot and killed a 13-year-old boy who was carrying a plastic replica of an assault rifle that the officer mistook for a real gun.

The Sonoma County District Attorney's Office concluded in a report unveiled on Monday that deputy Erick Gelhaus "honestly and reasonably" believed he faced an imminent of threat of death or serious bodily harm to himself or others when he shot the youth, Andy Lopez, last October.

The eighth-grader, clad in a hooded sweatshirt, was walking near his home on the way to a friend's house in the wine-country town of Santa Rosa when Gelhaus and his partner spotted the boy from their patrol car carrying what appeared to be an AK-47.

The deputies stopped their car and ordered Andy to drop the gun, but as the youth turned toward the officers, Gelhaus saw the rifle barrel rise upward and he fired eight shots at the boy, according to police accounts of an incident that unfolded in a matter of seconds.

The gun in question turned out to be an imitation AK-47 capable of shooting pellets or BBs, investigators said. The orange tip of the barrel designed to distinguish the replica from a real gun had been broken off.

But Gelhaus, a veteran officer and firearms instructor with nearly 20 years of experience in the U.S. military, believed at the time that he faced a "do or die" situation and responded accordingly, the prosecutor's report said.

"Here the implementation of lethal force was a reasonable response under the circumstances," the 52-page concluded. "Therefore, the actions of Deputy Gelhaus were lawful and no criminal charges will be filed against him at this time."

District Attorney Jill Ravitch said that before releasing the findings of her investigation she contacted California Attorney General Kamala Harris to determine whether her office intended to conduct its own review of the case and that Harris has declined to do so.

The FBI launched its own inquiry into the shooting last October and Ravitch said her office's report would be forwarded to federal investigators as their probe continues.

The boy's parents also have filed a federal civil rights lawsuit against Gelhaus and Sonoma County.