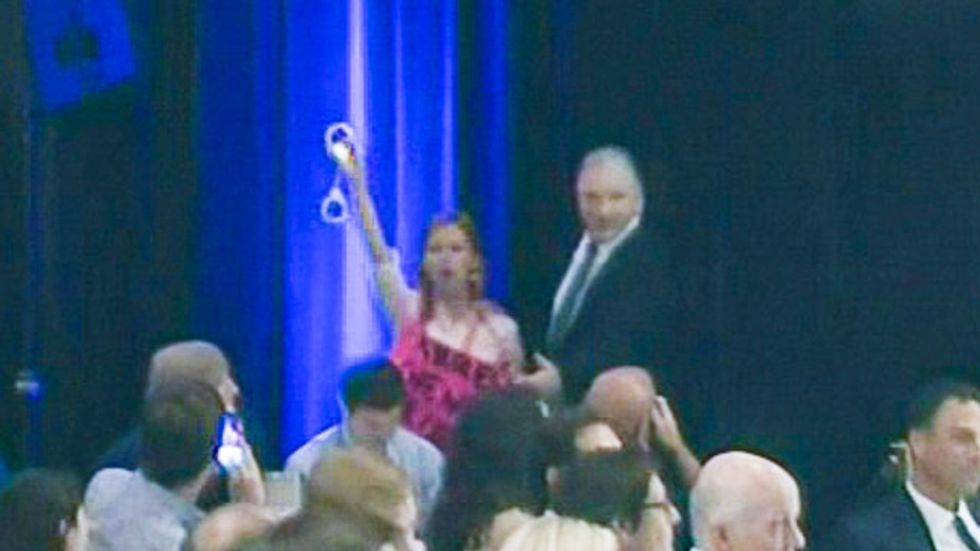 C-SPAN's live stream of a Politico interview with Dick Cheney and his family went to black on Monday just as a protester with handcuffs accused the former vice president of being a war criminal.

Host Mike Allen began the "Politico Playbook" event by asking Dick Cheney, his wife Lynne, and his daughter Liz if they talked about politics at home.

After Lynne Cheney took a jab at Hillary Clinton by saying that she was not "dead broke" when her husband was nominated for vice president in 2000, Liz Cheney complimented her parents for involving their children in politics from an early age.

About that time, someone in the audience began to yell that Dick Cheney was a "war criminal," which caused Lynne Cheney to chuckle.

For a moment, the camera panned to the audience, where a woman wearing a pink sign and holding up a pair of handcuffs was being detained by security. Seconds later, the video went to black.

"And we are having some problems with the feed coming to us from the Politico Playbook lunch," a C-SPAN announcer eventually explained.

CORRECTION: A previous version of this story said that Politico had cut its live feed, interrupting the broadcast. Politico says that its live-stream of the event was never interrupted, despite C-SPAN's technical problems.