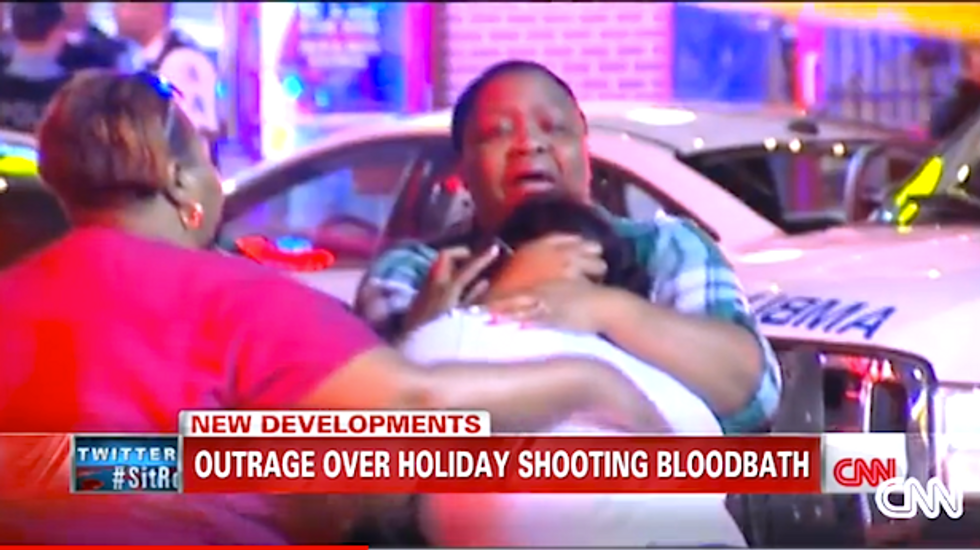 The Fourth of July holiday weekend brought an explosion of gunfire to Chicago, with more than 50 people shot and nine killed, authorities said on Monday.

The violence was widespread in the nation's third-largest city from Thursday evening through Sunday midnight, police said. There were 50 separate shooting incidents that left 53 wounded and nine dead, police said.

Many more people were shot in the early hours of Monday, bringing the number of wounded to more than 80 and the body count to 14, according to the Chicago Tribune newspaper.

At a news conference Monday morning, Chicago Police Superintendent Garry McCarthy called the violence "unacceptable," blaming it in part on a "proliferation of firearms."

Police said five people were shot by officers, and at least two of them were killed.

In three of the incidents, the victims had pointed weapons at officers when they were shot, the Chicago Police Department said in a statement. A fourth man was shot and seriously wounded by police after he told them he had a weapon, police said. There were 21 shooting incidents just on Sunday, police said.

McCarthy said gangs and repeated criminal offenders cherish their weapons and are more likely to engage in gun battles with police than discard their guns because of lax state and federal laws. McCarthy has repeatedly called for mandatory minimum sentences for gun crimes.

"There is more of a sanction from their gangs for losing a weapon than there is to get arrested with an illegal firearm," McCarthy said at the press conference Monday. "Something's got to change."

Chicago Mayor Rahm Emanuel, who has also called for tighter controls on firearms, condemned the shootings.

"This violence is unacceptable wherever it occurs in our city and all of us need to take a stand," he said in a statement on Monday, saying that solutions must go beyond policing.

Earlier this year, Emanuel announced a "summer safety" plan that called for 300 extra police officers to patrol over the Fourth of July weekend.

McCarthy said despite the wave of violence over the weekend, shooting deaths were down year over year through Sunday, with 185 so far this year compared with 196 through the same period in 2013.

Multiple shootings were reported around the United States over the holiday weekend. Police in Houston said on Monday that four people were shot at a dance early Saturday, including a 16-year-old boy who was critically wounded.

In St. Louis, at least seven people were shot, three of them fatally, over the weekend, according to police.

And in Indiana, an Indianapolis police officer was killed in a late-night shootout on Saturday, in one among multiple shootings reported across Indianapolis over the weekend, according to law enforcement officials.