Religious activists have too much say over our right to die 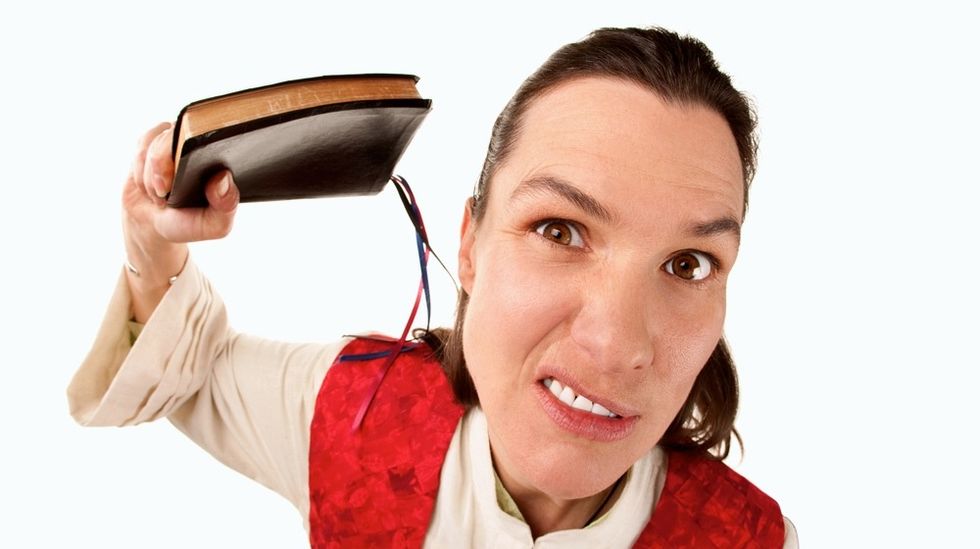 Following successful complaints, we should soon be hearing much less – on the BBC at least – from the climate change hobbyist Lord Lawson. An edition of the Today programme that treated the former chancellor's outlandish hunches to the same sober consideration as the evidence-based conclusions of Professor Sir Brian Hoskins, of Imperial College London, has led to an apology – and a further reconsideration of editorial balance. Having assessed the Lawson v the Academic Mainstream dialogue, in which the former remarked that 2013 had been "unusually quiet" for tropical storms, the head of the BBC's Complaints Unit said: "Minority opinions and sceptical views should not be treated as if it were on an equal footing with the scientific consensus."

But proponents of the slippery slope argument must be asking: where will it all end? Is irrationality itself at risk? If a man of Lord Lawson's stature can be marginalised simply for promulgating obviously fanatical rubbish supported only by anecdote and untested assertions, what could this mean for, say, religious authorities who are deferred to far more regularly than he ever was? Must they, too, be denied their traditional platform, condemning the fashionable consensus on anything from gay marriage and abortion to Sunday trading and the right to die, for no better reason than these activities contravene some personal take on holy writ?

It does seem a little unfair, for example, that while Lawson is discouraged from airing opinions that occasionally had to do with actual weather conditions, a religious campaigner such as Andrea Williams, a member of the General Synod and chief spokesperson for her own pressure group, Christian Concern, should continue to be accepted as a respectable pundit, specialism: 21st-century challenges to Old Testament regulations. Ms Williams's name will already be familiar to many gay rights campaigners courtesy of a memorable speech on same-sex relationships, in which she applauded Jamaica's criminalisation of what her sect considers a curable aberration, a diagnosis she did not hesitate to apply to Tom Daly.

Today, Williams is one of many religious activists fighting the option of assisted dying for the terminally ill, a measure gleefully extinguished by the bishop-infested House of Lords in 2006, now revived in Lord Falconer's bill , and supported by 82% of the population.

Last week, in an uncompromising editorial, the BMJ declared , having looked at the evidence, that Falconer's bill is safe, that it is humane and makes "robust allowance" for conscientious objection by dissenting doctors and palliative care obsessives, whose convictions should not trump the wishes of their patients: "It's the right thing to do and most people want it." This followed another important endorsement of assisted dying, by Professor John Ashton, president of the Faculty of Public Health. "Personally I would like that for myself if I was in this position," he said. "I would like to be able to call on a doctor to help me take this last step."

And Andrea Williams would like to stop him doing any such thing. "It's not a doctor's place to play God at the end of life," she said , when invited to comment. That's her job. Not forgetting the Anglican bishops, Catholic priests and like-minded ideologues who also see a chance to impose their religious values, in the face of death, on individuals who never shared them in life.

In fairness to Ms Williams, as we picture her hovering over our deathbeds with a retinue of homophobic cherubim, she does not conceal, as an evangelical activist, that her zeal has its origins somewhere far beyond the reach of reason and humankindness. In fact, the prospects for Falconer's bill, and for the overwhelming majority who agree with it, might be brighter if more of its religious opponents were as openly indifferent to evidence, argument and testimony that has moved the most godless to pity.

But as before, when Lord Joffe made a superb case for compassion, the largely faith-based opposition to Falconer's bill is apt to present itself in faux-lay mode, as primarily bothered about public safety, precedents, slippery slopes. Given, for example, that over half of them have identified as devout, it is hard to imagine what would have persuaded the 11 peers behind an anti-Falconer paper, An Analysis of the Assisted Dying Bill, to look kindly upon its provisions, but the document constructs an ostensibly faith-free, "clear-thinking" case against, which is nonetheless replete with routine frighteners and selective misrepresentation. "Only a minority of doctors would be willing to participate in such acts," the authors clear-thinkingly object. There's a doctor shortage in Wales: general practice has yet to be abandoned.

Unlike the authors of the BMJ's editorial (who do not, in any case, hope to impose suicide on the faithful), these peerlessly objective analysts, who style themselves Living and Dying Well, see no need to declare interests that might be just as telling, in their way, as a Living and Dying Well chain of luxury hospices. One, Baroness O'Cathain, has said, in relation to politics and her evangelism: "For me it is a guarantee of eternal peace." Baroness O'Loan, too, is "called to holiness". Baroness Butler-Sloss speaks – elsewhere, obviously – of being "a Christian and a judge". Baroness Cumberlege is treasured by co-religionists as "a distinguished Catholic politician". Baroness Hollins says: "We are a Christian country with Christian values." And next time anyone introduces their colleague, Baroness Finlay, a doctor known as a dispassionate expert in palliative care, it should perhaps be mentioned, for the sake of balance, that she is considered a valued asset by the Catholic church, which funded her intervention in the assisted dying debate in New Zealand.

If it is still possible, following the protracted contortions over gay marriage, to justify the efforts by a minority of religious agitators to control a non-observant majority, in this case by denying them suicide, then democratic transparency surely requires some openness about their affiliations. At a minimum, faith-based opponents of assisted dying should abandon as unworthy a deliberate scheme, exposed by Raymond Tallis, chair of healthcare professionals for assisted dying, to conceal "their real reasons behind arguments intended to instil fear of the consequences of legalisation".

Otherwise, as debate on Falconer's bill intensifies, we can expect further misleading interventions by representatives of Living and Dying Well, and Care Not Killing, another predominantly religious coalition whose campaign director, Dr Peter Saunders, has explained that although his objection is based on sanctity of life: "To win the debate on assisted dying we need to be using arguments that will make sense to those who do not share our Christian beliefs."

His judgment was only confirmed by last week's news reports, following the BMJ editorial, in which balance required that the opposition, in the shape of Care Not Killing, be prominently quoted. "While the autonomy is important," he said, "it has to be balanced against other principles including public safety." In future, even those who do not share his Christian beliefs may feel a duty to dissuade Dr Saunders, and others like him, from contravening the spirit of the ninth commandment.