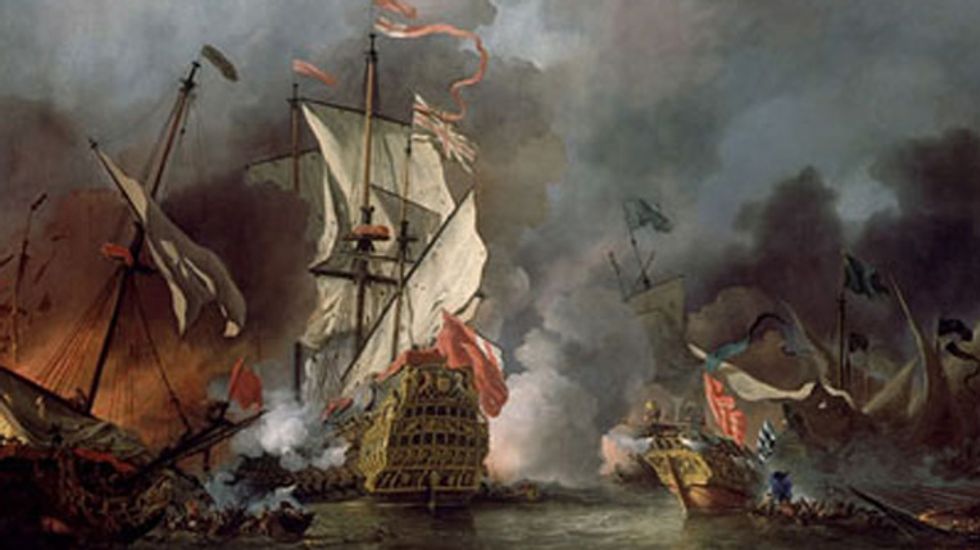 A major underwater rescue excavation is being mounted this summer by English Heritage to solve a 349-year-old mystery: how warship the London managed to blow itself up without firing a shot at the enemy, in broad daylight, within sight of the Southend seafront.

Cotswold Archaeology and local divers hope to recover as much information as possible before the ship's splinted timbers finally disintegrate. Much of the wreck has been preserved in pristine condition on the bed of the Thames Estuary, sealed within a deep layer of silt and mud, but it has been on the national inventory of heritage at risk since it was realised that timbers were being scoured bare and quickly destroyed by changing tidal patterns, including the dredging for the huge new London Gateway port development.

In 1665 the explosion was a humiliating disaster. The London was blown in half, and sank almost instantly. At least 300 people died, perhaps many more: a surprising number of the human remains recovered so far have proved to be female, suggesting that as well as the 350 crew, plus extra gunners for the newly mounted artillery, the 17th century ship was carrying many of their wives and sweethearts.

"It's a good question why there were so many women, and one on which I wouldn't care to speculate," archaeologist and diver Dan Pascoe said.

Only 24 men and one woman survived the disaster, clinging to the ornately carved stern which the archaeologists believe was left sticking vertically out of the shallow water.

A few hours later the London's new commander, Sir John Lawson, would have gone down with the ship: as it was, several of his children and other members of his family died. The London had been refitted at Chatham, and was sailing to Gravesend to collect him and become his flagship in the second Anglo-Dutch wars. The ship was carrying 300 barrels of gunpowder and it is believed that a 21 gun salute was being prepared. "Clearly there was some hiccup," Mark Dunkley, maritime archaeologist at English Heritage said.

Apart from the mystery of its end, the wreck is of great historic importance. The London was one of only three completed wooden Second Rate ships, with elaborate carved decoration that made them as much status symbols as weapons of war, built for the English Fleet between 1642 and 1660. It is the only one that survives.

Archaeologists love sudden catastrophes. Most ships in history have become worn out and been stripped and broken up. A ship that sinks like the London, or the Mary Rose a century earlier, goes to the bottom with all their evidence of daily life: the cooking pots, beer tankards, candle sticks, cap badges, food barrels, rats and cats.

Diving conditions on the London are atrocious. They have an hour to work between tides, visibility is often down to inches, and the wreck lies so close to the shipping lane that they are buffeted by every passing vessel.

Working mainly by touch and the faint glimmer of their head torches, the divers are helping map the wreck and bring up finds every day: the most recent haul includes a pistol and musket shot, part of a weighing scales and spoons. The clay pipe and the tallow candles they also found "look very much like a smoking gun", archaeologist Steve Webster observed.

The finds are all being recorded and packed on the end of Southend pier as they come ashore, watched by curious sun bathers, strollers and local volunteers working with Southend Museum, where many will go on display.

Scores of the ship's guns must also still lie buried in the silt. Some were retrieved immediately after the wreck. The Royal Armouries at Fort Nelson has a fine French naval gun recovered in the 1960s, which must have been a captured prize, and is also displaying two bronze guns allegedly illegally removed from the wreck more recently. One of these was made in the 1590s by Peter Gill, a royal gun founder, and one bears the Commonwealth arms – together showing the variety of artillery in service on one of Charles II's ships.

Steven Ellis, a fishmonger from Leigh-on-Sea, hobby diver and passionate amateur historian, has been watching over the wreck for years. Local fishermen phone him if they spot anybody dubious near the wreck – one recent intruder proved to be a survey boat from Cotswold Archaeology.

He dives most days, and hopes to be back when work resumes next summer. Among the objects he has recovered are two human skulls: "Sometimes when I get home, I just sit down in the kitchen and I can't get the thought of all those people, all those lives lost, out of my mind," he said.