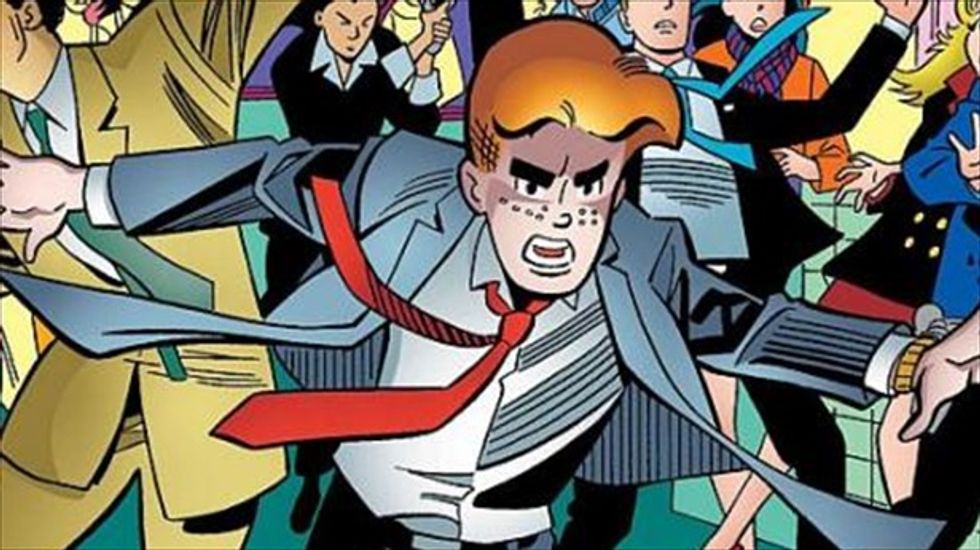 SINGAPORE (AFP) – Singapore has banned a volume of the long-running Archie comic series because its depiction of same-sex marriage was deemed to breach local “social norms”, the city-state’s media watchdog said Wednesday.

Archie: The Married Life Book Three was banned in March after a complaint from a member of the public triggered a content review, the Media Development Authority (MDA) said in a statement to AFP.

The volume, made up of six issues of the Life with Archie series, features the marriage of Kevin Keller, a friend of the iconic Archie Andrews character, and his African American boyfriend Clay Walker.

The MDA said it assessed the book “upon receiving a complaint and found its content to be in breach of guidelines because of its depiction of the same-sex marriage of two characters in the comic”.

A special panel that confers with the MDA on objectionable content “advised that the theme of the comic was not in line with social norms and is in breach of existing content guidelines,” the regulator said.

“We thus informed the local distributor not to import or distribute the comic in retail outlets,” it said.

News of the ban first surfaced when a local comic artist blogged about it earlier Wednesday.

The announcement to ban the volume, published in 2013, comes as a new issue of “Life with Archie” is released in the United States in which Archie dies while trying to save Kevin from an assassination attempt.

Kevin, the series’ first openly gay character, is depicted as a US Senator.

The comic book ban comes in the face of rising tensions between Singapore’s religious conservatives and its growing gay-rights lobby.

Earlier Wednesday, judges of a top literary prize quit over the national library’s plans to destroy three children’s books deemed to be pro-homosexual.

Nearly 400 people had gathered on Sunday in protest, while local writers also condemned the move as an exercise in “book burning” and censorship.

Over 20,000 people gathered in a peaceful rally supporting gay rights on June 28 despite a fierce online campaign against the event by conservative Muslims and Christians.

Sex between men is illegal in Singapore and punishable by up to two years in jail under a provision in the penal code dating back to British colonial rule.

Guidelines on MDA’s website about comics allowed for release in Singapore state that “themes or depictions of alternative lifestyles or deviant sexual practices should not be featured,” including “homosexuality, group sex and sado-masochism”.

After spending more than a year promoting Donald Trump's baseless claims of election fraud, Fox News appears to be changing its tune as the January 6 committee presents increasingly damning evidence of the former president's complicity in the Capitol riot.

As the committee probe has gone public, at least four Fox News hosts and one analyst have casted doubt over Trump's grandiose claims of fraud, for which there continues to be no evidence to speak of. Some have also questioned the former president's mental fitness, suggesting that Trump cannot be trusted to steer the country in 2024 after spreading such spurious conspiracy theories about 2020.