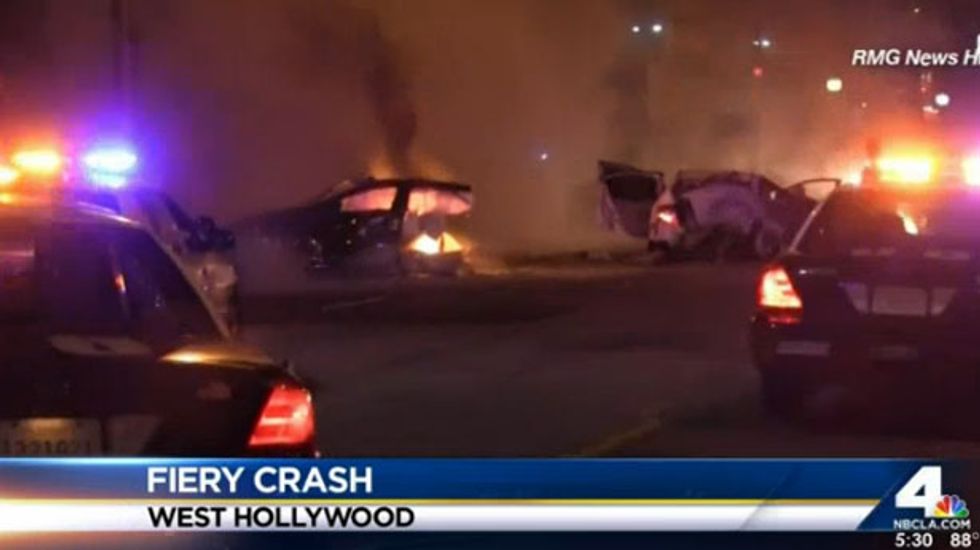 A stolen Tesla all-electric car was destroyed in a fiery crash early Friday after speeding through Los Angeles-area streets.

The Model S vehicle was stolen from a Tesla Motors dealership in the Los Angeles metropolitan area.

The driver of the stolen car led police on a high-speed chase, reaching speeds of up to 100 mph. Police abandoned the pursuit after crashing into a median.

The Model S was split in half after it rammed into a light pole and other cars. The back end of the car ended up wedged between two walls of a synagogue in West Hollywood, while the heavily damaged front end caught on fire in the street.

"Everybody who was looking was screaming," witness Francisco Estrada told NBC Los Angeles. "They tried to help but there was too much smoke."

The driver of the stolen car was flung from the vehicle during the crash. The suspect was initially believed to be dead, but was resuscitated by paramedics. Six other people were also hurt.

Fiery Tesla accidents have attracted attention in the past. Tesla CEO Elon Musk insists fires are a greater risk for gasoline-powered cars than battery-powered cars.