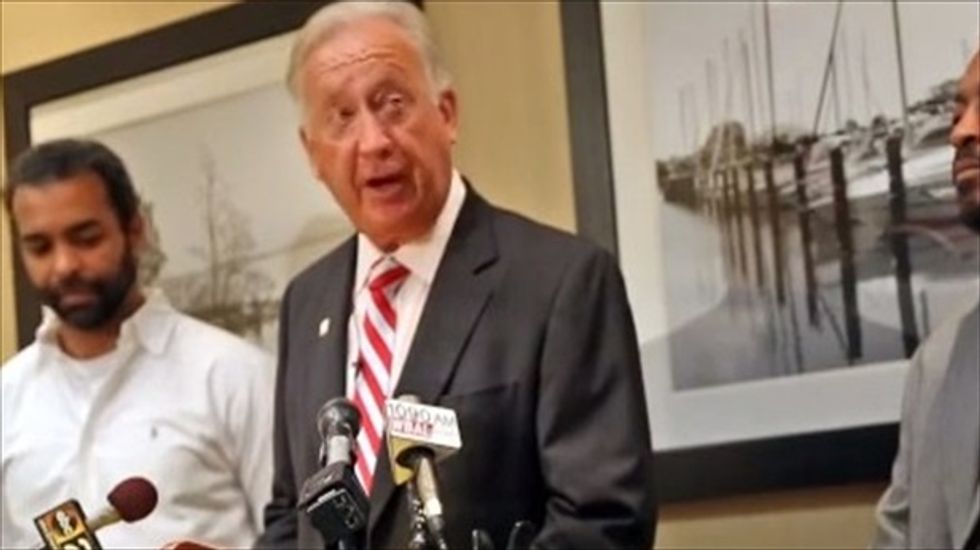 Maryland Republican candidate Michael Peroutka berated Planned Parenthood, the Southern Poverty Law Center, MSNBC host Al Sharpton and other groups while refusing to back down on his association with a neo-Confederate group during a far-ranging public statement on Wednesday, Right Wing Watch reported.

"Republican leadership here in Maryland has rightly said that this race card sideshow is a distraction from the real issues," Peroutka said. "But they make the mistake, however, in attempting to kowtow to liberals and Democrats that created that distraction."

Peroutka, who won the GOP primary for the upcoming Anne Arundel County Council election, made his remarks three days after video came to light of him singing "Dixie," the Confederate anthem, at the 2012 national conference for the League of the South, a pro-secession group.

Instead of addressing that incident straight away, however, Peroutka instead devoted some of his time to decrying the SPLC, calling it a "well-founded, left-wing group" and blaming it for last year's shooting attack against the anti-LGBT Family Resource Council.

"You see, he had consulted [the SPLC's] map of 'hate groups,' quote-unquote," Peroutka argued. "Providentially, this act of anti-Christian hate was stopped by a security guard. But it points out the dangers of the Southern Poverty Law Center, which has labeled about 1,000 groups across the country as, quote-unquote, 'hate groups,' smearing together obvious hate groups such as neo-Nazis and the Klan with groups where the SPLC simply doesn't like their politics."

He also brought up a heavily-debunked talking point accusing Planned Parenthood of "committing Black genocide," while also lambasting Sharpton for allegedly proving that Democrats can be as "destructively racist" as they want.

"They can start race riots, or defend young men who brutally rape a Black woman," Peroutka said. "And they are rewarded with their own MSNBC show, as long as they remain loyal to the Democratic party and Barack Obama."

Peroutka, a former Constitution Party presidential candidate who has said that the state's general assembly was illegitimate for passing laws that "violate God's law," finally addressed the issue of the League of the South -- which he called a "Christian free-market group" in his opening remarks -- while taking questions from reporters. But he refused to denounce the organization, describing such a move as "feeding the race card monster."

"I believe that that is playing into the cynical political charade," he said. "As I said, that doesn't really work."

Two Black conservative allies and friends, Eric Knowles (pictured above left) and Robert Broadus, flanked Peroutka as he made his remarks, and also took the microphone to endorse him.

"I haven't seen anything that would prove he's any sort of racist whatsoever," Knowles said of Peroutka. "He's been nothing but welcoming with open arms to everyone I've seen of any sort of background, color, creed whatsoever."

Watch Peroutka's press conference in its entirety, as posted online on Wednesday, below.