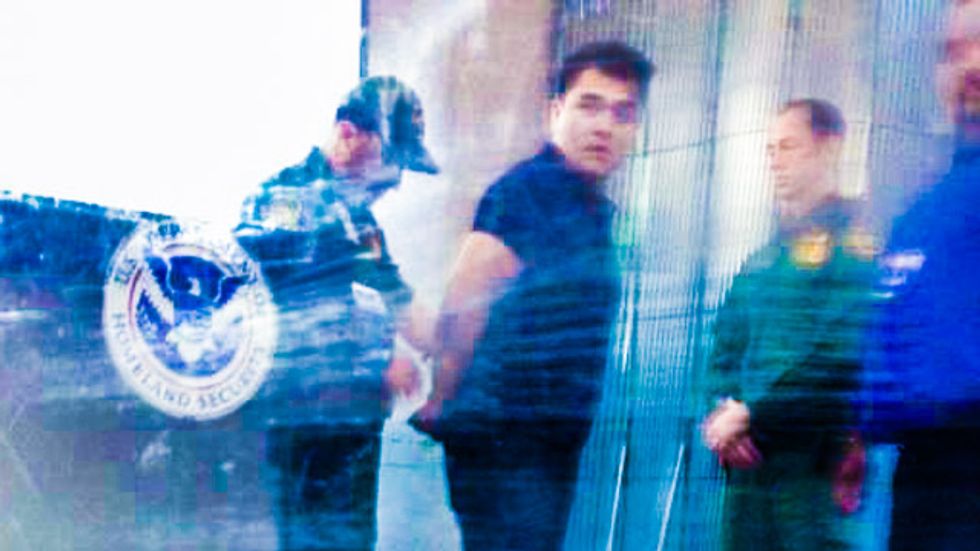 Pulitzer Prize-winning journalist Jose Antonio Vargas, who outed himself as an undocumented immigrant in 2011, was detained by U.S. border patrol agents while reporting on the refugee crisis in Texas on Tuesday.

Editor's Note: This story has been updated. Please see below.

Vargas had been reporting from McAllen, a city along the Mexico border, when he realized that he might have trouble leaving the state due to stricter immigration enforcement.

His final tweet before being detained at McAllen airport while trying to board a flight to Los Angeles showed a photo of his Philippine passport and a copy of the U.S. Constitution. Soon after that, Huffington Post writer Ryan Grim tweeted a photo of agents placing handcuffs on the journalists.

"Vargas originally traveled to the border in support United We Dream (UWD) and Minority Affairs Council (MAC), a local UWD affiliate, in order to highlight the stories of refugee children who have fled countries in Central America because of increased levels of violence," United We Dream, an activist organization founded by Vargas, said in a statement. "The organizations have been volunteering in shelters that provide support to children and families."

On Monday, CNN's Eric Burnett asked Vargas if he was "daring" officials to detain him by traveling to the border town.

"But, Erin, why the double-standard?" Vargas asked. "When I outed myself three years ago, my goal is to say I'm one of the 11 million [undocumented] people. I'm not asking for special treatment, I'm not asking for there to be any double standard. The government is doing that."

"The question here is, how do you define American?" he added. "That's the question."

Update: The Washington Post reported that Vargas was released on his own recognizance with a notice to appear in court at a later date.

Vargas issued a short statement thanking supporter on the website for his advocacy group, Define American.

"Our daily lives are filled with fear in simple acts such as getting on an airplane to go home to our family," his statement read. "With Congress failing to act on immigration reform, and President Obama weighing his options on executive action, the critical question remains: how do we define American?"

Watch the video below from CNN's Newsroom, broadcast July 15, 2014.