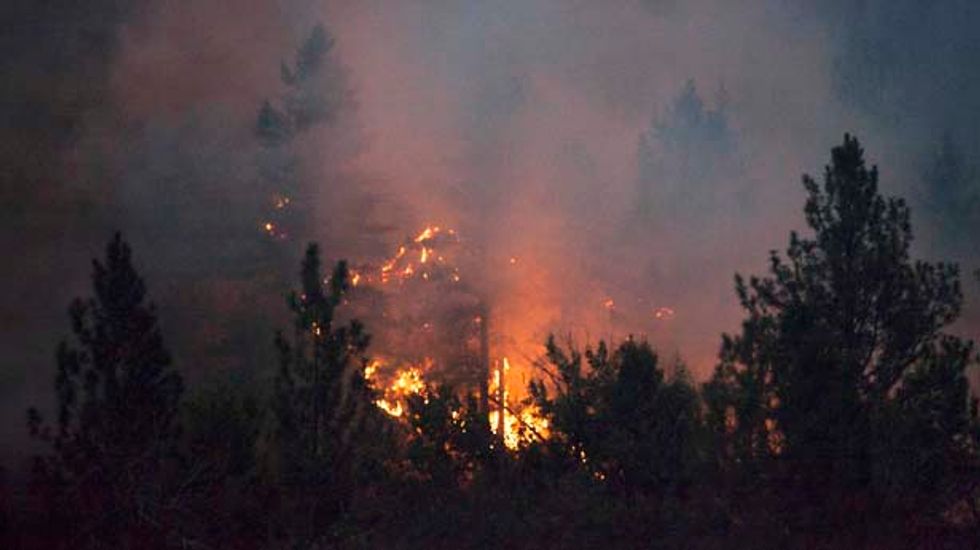 (Reuters) - A wildfire raging east of Washington state's Cascade Mountains has destroyed about 100 homes and displaced hundreds of people, an emergency official said on Saturday, with cooler weather not expected to provide relief for another day.

The four-blaze Carlton Complex fire destroyed homes in and around the town of Pateros, about 120 miles (193 kms) northeast of Seattle, said Mark Clemens, a spokesman for the Washington Emergency Management Division.

The town's 650 people were under mandatory evacuation orders, though some began returning on Friday to survey the charred remains of their homes and belongings.

He said temperatures were not expected to drop or humidity rise until Sunday to help the 625 firefighters battling the blaze which has whipped through areas of timber and grass.

The Carlton Complex fire was triggered by lightning strikes on Monday. It has since burned more than 100,000 acres (40,500 hectares) of parched vegetation.

The fire is among more than two dozen burning from southern California to Idaho as drought-parched Western states enter their annual fire season.

The biggest fire, the lightning-sparked Buzzard Complex, has burned about 368,000 acres of rangeland in eastern Oregon and is about a fifth contained, said Rita Dyer, a fire spokeswoman.

Both Washington and Oregon have declared states of emergency as wildfires scorched thousands of acres, destroying homes, outbuildings and crops.