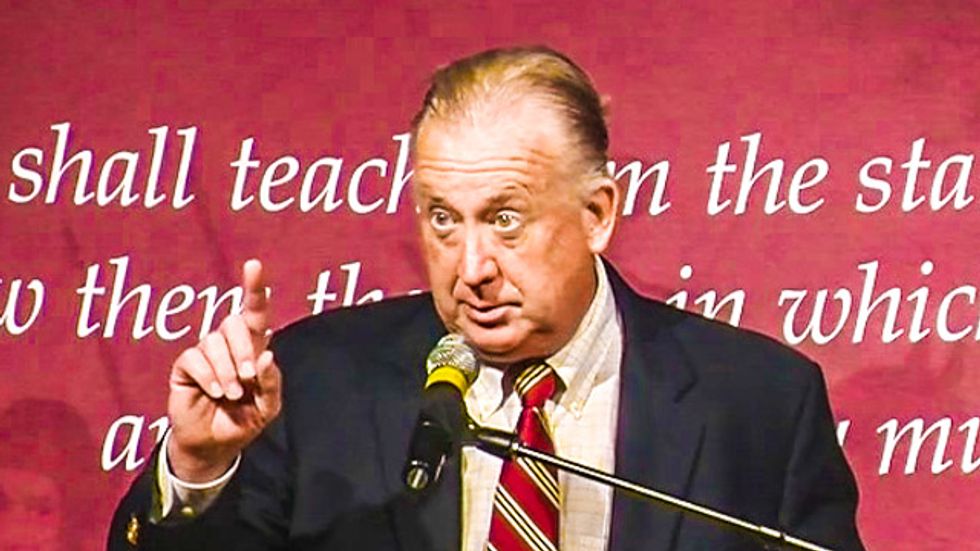 Video has surfaced of a Maryland Republican nominee for Anne Arundel County Council singing "Dixie" as the national anthem at a secession conference in Alabama.

Over the weekend, Grove City College psychology professor and blogger Warren Throckmorton uncovered video of Michael Peroutka speaking to the 2012 League of the South national conference in Wallsboro, Alabama.

Peroutka generated controversy after winning the GOP nomination because he believes that the current U.S. and state governments are no longer valid, and should be destroyed by secession or other means.

"We're going to have to have this foundational information in the hearts and the minds of the people or else liberty won't survive the secession either," he explained. "I'm saying this because I don't want people from League of the South to think for one minute that I am about reforming the current regime, and studying the Constitution is about reforming the regime. I, like many of you and like Patrick Henry, probably have come to the conclusion that we have smelled a rat from the beginning."

At the conclusion of his nearly hour-long talk, Peroutka asked the audience to rise and sing the "national anthem."

But instead of "The Star-Spangled Banner," Peroutka led them to sing "Dixie," the de facto anthem of the Confederacy during the Civil War. The song tells the story from the point of view of a freed slave who wishes to return to the plantation where he was born.

Last week, Steve Schuh, the GOP candidate for county executive, called on Peroutka to cut ties with League of the South.

“I’ve asked Mike Peroutka to resign from an organization that I do believe could be considered racist,” Schuh told the Capital Gazette. “He has assured me that he is not a racist and that he believes in the equality of all members of the human family... He has further assured me that he does not believe in secession of any portion of our country.”

The Southern Poverty Law Center has classified the League of the South as a neo-Confederate hate group.