20,000 Yazidi Iraqis targeted by ISIS escape from mountain after US air strikes 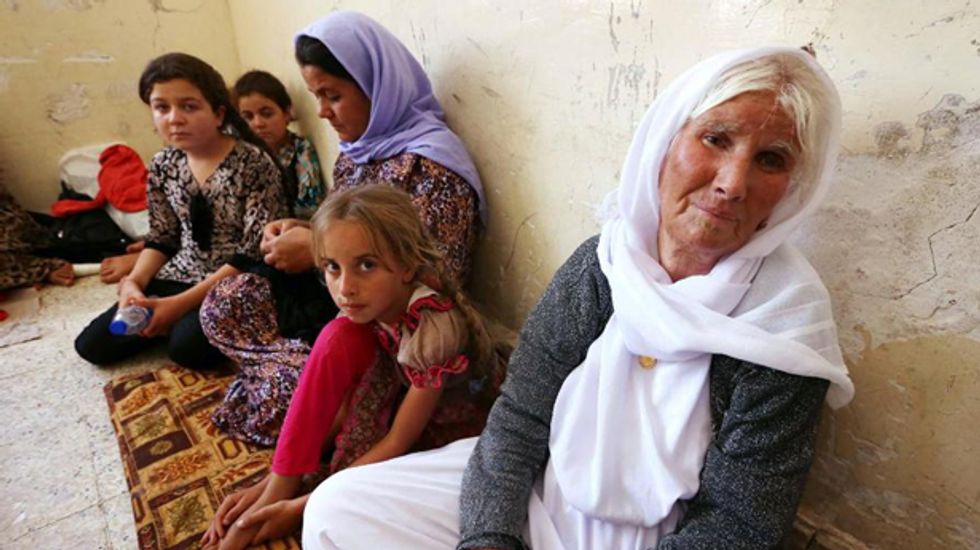 At least 20,000 Iraqi civilians who were besieged by jihadists on a mountain have managed to flee after US air raids on Islamic State (Isis) forces, officials have said.

Shawkat Barbahari, an official from the autonomous Kurdish region of northern Iraq, said 30,000 people had escaped to Syria and then been escorted back into Iraqi Kurdistan by Kurdish forces. A spokesman for the UN Office for the Coordination of Humanitarian Affairs (UNOCHA) in Iraq said officials had been reporting to the UN that 15,000 to 20,000 people had escaped the siege. Fears had been growing for the civilians, mostly Kurds of the Yazidi faith, trapped on Mount Sinjar in north-west Iraq in the searing summer heat with little to eat or drink.

The breakthrough coincided with US air raids on Isis fighters in the Sinjar area on Saturday. Barack Obama, who sanctioned the air strikes on Friday, has said the US is in it for the long-haul, warning "this is going to take some time".

Barbahari, who is in charge of the Fishkhabur crossing with Syria, told AFP: "The Kurdish peshmerga forces have succeeded in making 30,000 Yazidis who fled Mount Sinjar, most of them women and children, cross into Syria and return to Kurdistan. Most of them crossed yesterday and today, this operation is ongoing and we really don't know how many are still up there on the mountain."

Iraqi MP Vian Dakhil, who is from the Yazidi minority, said 20,000 to 30,000 had managed to flee the mountain they ran to a week ago when militants overran the Sinjar region and were now in Iraqi Kurdistan. "The passage isn't 100% safe," she said. "There is still a risk."

Iraq's human rights minister, Mohammed Shia al-Sudani, told Reuters that Isis militants have killed at least 500 members of Iraq's Yazidi minority during their offensive in the north. He said the Sunni militants had also buried some of their victims alive, including women and children. Some 300 women were kidnapped as slaves, he added.

"We have striking evidence obtained from Yazidis fleeing Sinjar and some who escaped death, and also crime scene images that show indisputably that the gangs of the Islamic States have executed at least 500 Yazidis after seizing Sinjar," Sudani said.

UNOCHA spokesman David Swanson stressed that the UN was not directly involved in the evacuation of the civilians from Mount Sinjar and could not confirm the numbers but stood ready to assist those crossing back into Kurdistan's western Dohuk province, where the UN has a presence.

An RAF transport aircraft made the first airdrop of British humanitarian aid on the mountain on Saturday night, joining the US in dropping clean water, filtration devices, food and tents.

The UK's international development secretary, Justine Greening, said: "The world has been shocked by the plight of the Yazidi community. They face appalling conditions, cut off on Mount Sinjar after fleeing persecution by Islamic State extremists.

"The UK has acted swiftly to get life-saving help to those affected. Last night the RAF successfully dropped lifesaving UK aid supplies, including clean water and filtration devices, on the mountain."

President Joe Biden is nearing a foreign policy victory in the Middle East, according to a new report.

"The United States and Iran could each come back into compliance with a 2015 nuclear deal within weeks, a senior State Department official said on Thursday, on the eve of what could be a final round of negotiations before an agreement is brokered. Significant hurdles remain. But the comments were an optimistic signal by the Biden administration that an American return to the accord between Iran and world powers could be within reach," The New York Times reported Thursday.

California Republicans got their wish: barring a freak development, they have the signatures to trigger a recall election against Democratic Gov. Gavin Newsom this year, setting off an expensive election just a year before he stands for a second term.

The only problem: they have no credible plan to beat a relatively popular Democratic governor in a state where Democrats outnumber Republicans by two to one in registrations. And according to The Washington Post, some Republicans are now reduced to hoping that Newsom faces a massive wildfire season and bungles it, to drive down his popularity.

David Badash, The New Civil Rights Movement
"This is an existential threat" David Plouffe, former President Barack Obama's campaign manager and White House senior advisor, slammed Republican lawmakers who "hate democracy," which he warned is "hanging by a thread." He also urged the Dept. of Justice to be "all over" the recount on Arizona, but warned the white supremacists, QAnon and MAGA cultists have already decided that Trump won the state, despite the actual facts that Joe Biden won, a fact that Republicans in positions of power agree with. "This is a DEF CON 1 moment for democracy,"  Plouffe told MSNBC's Nicolle Wallace. "We're not threatened by other nations or enemies, it's a threat from within. Democracy is hanging by the thinnest thread in our country's history. And what's happening in Phoenix, Arizona, should be happening across the board of Roswell, New Mexico," he added, apparently mocking Area 51 conspiracy theorists. "It's just crazy town. " "By the way there's no question that the end of this ridiculous theatricality of the collection of white nationalists and QAnon supporters and Trump cult members are going to say, 'you know, Trump should have won Arizona.' We already know the outcome. But this is deadly serious. The Department of Justice needs to be all over this not just in Arizona, but all these efforts around the country." Plouffe called it "puzzling" because "you've got all these Republican elected officials who are in office because they chose to participate in the theater of democracy, and I'm not sure we've ever seen people in America hate democracy this much, because basically what they want to do is enshrine themselves in power and they're doing it because they're fearful of this ridiculous, shameful, historically incompetent cult leader down in Mar-a-Lago, who they all traipse down there and pledge allegiance to," he said of Donald Trump. "And none of them got into politics because they thought they were going to be weak-kneed and bending the ring to a cult leader but that's where they've found themselves. Issues are secondary, their own careers in many respects are secondary." "Everybody who's concerned about this country, not about who wins the next election or the one after that, but the entire enterprise is at risk here. This is an existential threat. And so it's great to see DOJ, getting involved, to see a lot of groups like Mark Elias' are starting to file lawsuits, but what ultimately needs to happen here and this won't solve all of it is Congress must act." "They must pass voting rights legislation, and if they don't because a few Democratic senators decide that protecting the filibuster, which of course has its roots in slavery and racism, you're going to basically protect that, so that our democracy and our country can be handed over in permanence, to a party that increasingly is comfortable with white nationalism," Plouffe said, it would be "tragic." Watch:

"This is a DEFCON 1 moment for democracy. We're not threatened by other nations or enemies, it's a threat from within. Democracy is hanging by the thinnest thread in our country's history... The Department of Justice needs to be all over this" - @davidplouffe w/ @NicolleDWallace pic.twitter.com/yZWrBzvvcP

US not planning to shoot down errant 10-story Chinese rocket falling to Earth: defense chief