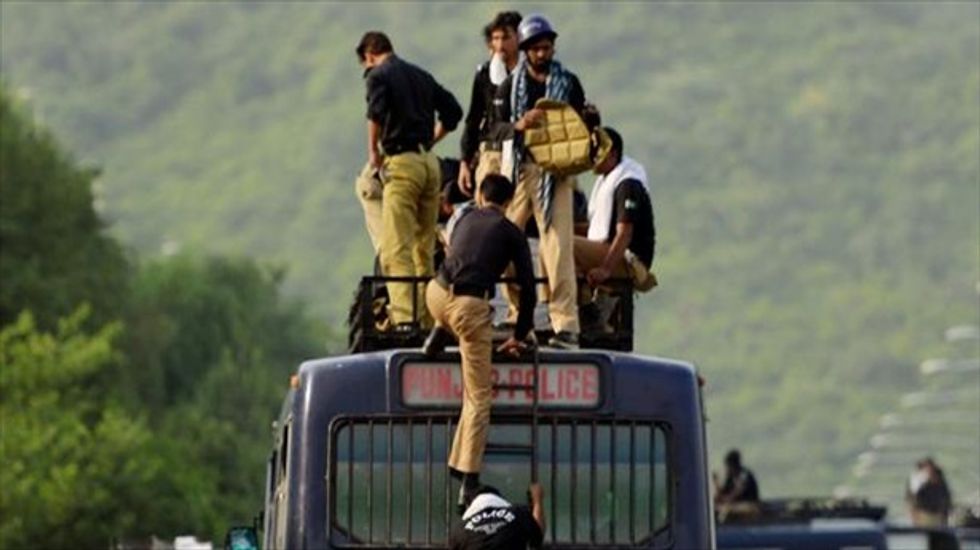 Pakistan riot policemen arrive at the site where supporters of Canada-based preacher Tahir-ul-Qadri and opposition politician Imran Khan are gathered in protest in Islamabad on Aug. 20, 2014 (AFP)

Anti-government protesters forced their way into the grounds of Pakistan's parliament on Saturday amid violent clashes that saw police fire teargas and rubber bullets at crowds demanding the prime minister's resignation.

A man died and more than 300 people were injured, according to local hospitals, during clashes that broke out after the followers of former cricket star Imran Khan and Pakistani-Canadian cleric Tahir-ul-Qadri began moving towards key government buildings in the heart of Islamabad.

Associated Press quoted a hospital official, Dr Wasim Khawaja, as saying that one protester, Naveed Razzaq, drowned in a ditch when the crowd was bombarded with tear gas

Thousands of protesters had besieged the sensitive area for nearly two weeks after the government deliberately chose not to use force to prevent them entering the high-security "Red Zone" of the capital. But police were finally compelled to respond after protesters attempted to use a crane to remove sea containers placed to block access to official buildings in the area, including the residence of the prime minister, Nawaz Sharif, who was not in the capital at the time.

Despite the presence of more than 30,000 security forces, the protesters, armed with hammers and cutting tools, eventually succeeded in using a truck to ram open gates outside Pakistan's imposing Parliament House, allowing people to flood on to the expansive lawns. The crowds did not attempt to enter the building itself after finding the entrance blocked by a large group of soldiers.

More than 300 people, including women, children and police officers were admitted to two government hospitals, Associated Press reported. The injured had wounds from tear gas shells, batons and rubber bullets, said Dr Javed Akram, who heads the capital's main hospital. He said 37 police officers were among the injured.

Protesters started regrouping at daybreak on Sunday and made repeated attempts to break through the heavy deployment of police and barricades to reach the premier's residence, AP reported. Police strengthened their lines and responded by lobbing tear gas canisters.

In recent days, Khan and Qadri had both threatened to try to push into the state buildings unless their demands for Sharif to stand down were met. They had also insisted that their supporters would remain peaceful, but many of them carried bamboo staves and had become prepared with eye protection and rudimentary gas masks.

Although both men had promised to lead from the front, with Khan even claiming he would "take the first bullet", they both stayed back, with Khan remaining inside a specially converted sea container that he has occupied throughout the protests.

Khan, the leader of the Pakistan Tehreek-e-Insaf (PTI) party, described the police action against the crowd as illegal. "Now we will show this government. We will call for countrywide agitation and we will jam the whole of Pakistan," he said.

Khan is ostensibly protesting against what he claims was industrial-scale rigging in last year's general elections, although no independent watchdog has supported his allegations. Qadri, a cleric whose own political party has no seats in parliament, has said he wants a "Green revolution" that will sweep away a democratic order he claims is inherently corrupt.

But in recent days, his demands have focused on a criminal investigation into the prime minister and other senior leaders over the killing of at least 10 of his supporters during confrontations with police in Lahore in June.

The desire to avoid a similar deadly confrontation made the government deeply reluctant to use force against Khan and Qadri when they first entered Islamabad after a "long march" from the city of Lahore on August 15. Serious violence could force an intervention by Pakistan's powerful military, which has repeatedly ousted civilian governments – a move many analysts believe Khan and Qadri had hoped to provoke.

The military, which has fought bruising policy battles with the government over the last year, has already taken a central role in the saga after army chief General Raheel Sharif held a late-night meeting with Khan and Qadri on Thursday.

But the discussions failed to create a breakthrough, with Khan returning to address his supporters with a promise that he would not end his protest until Sharif resigned.

On Saturday, the government insisted that Sharif would not step down despite the scenes in the capital and outbreaks of violence in other cities in the country.

Late on Saturday night, the country's defence minister said the protesters would not be allowed to continue and would be cleared.

Other political parties have generally supported Sharif during the drawn-out crisis. But the opposition Pakistan Peoples Party said it "strongly condemned" the police crackdown, while the leader of the Muttahida Quami Movement announced a "day of mourning" and demanded Sharif's resignation.