Activists point to outside agitators to blame for Ferguson violence 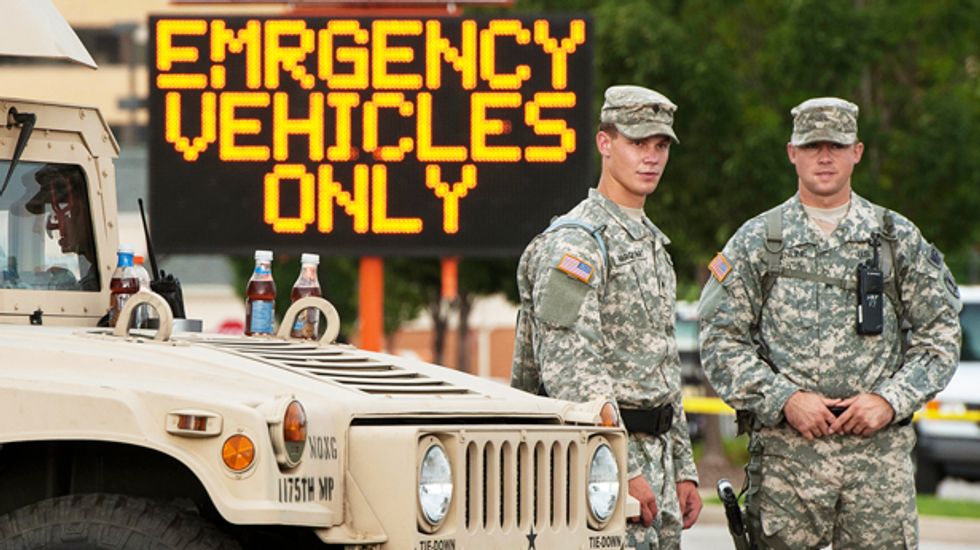 As darkness fell on Ferguson, Missouri, the crowd of several hundred people protesting the fatal police shooting of an unarmed black teen quickly and radically changed.

The crowd shrunk as many of the older people slipped away. Protest hymns were replaced by the shouts of angry teens who marched against a cordon of heavily armed police blocking the street.

By the end of another night of violence, dozens of people had been arrested, marking the latest outbreak of rancor in the St. Louis suburb where calls for peaceful protests have been overshadowed by episodes of looting, arson and clashes with police over the last 10 days.

Some perpetrators have made no efforts to hide their faces, others have charged into stores bare-chested, with shirts wrapped over their faces and baseball caps pulled over their brows.

Civil rights leaders and police - at odds over much of what has occurred in this small, mostly black St. Louis suburb - agree on at least one hypothesis: Many of the perpetrators are not local residents.

At times, the most violent element hide in alleys, emerging to throw rocks or bottles before disappearing again. Others are caught and taken into custody.

After Monday's violence, 56 people were arrested overnight, most on a charge of failure to disperse, according to the St. Louis County Justice Services Center. It said 15 were from outside Missouri, although the more serious charge of unlawful use of weapon was brought against two locals.

Since a white police officer killed unarmed black teenager Michael Brown on Aug. 9, police have struggled to contain outbursts of violence, even as Highway Patrol officers and National Guard troops have also been deployed.

“I’ve said that many a criminal element that have been coming through Ferguson are not from this area. Tonight, some of those arrested came from as far away as New York and California," State Highway Patrol Captain Ron Johnson told a news conference following Monday's protests.

Whoever is behind the violence, local and civil rights leaders seemed unable again on Monday to fully control the most violent elements in the crowd.

As the Missouri Highway Patrol, which has been put in charge of security on site, rolled out noise cannons intended to drive demonstrators back, a handful of area preachers appealed to the crowd to heed their orders.

While the majority of the crowd heeded the appeal, a smaller group assembled a quarter mile away, near the site of a burned-out gas station that was destroyed in the first night of rioting more than a week ago, hurling rocks at police and breaking glass.

As the crowd grew angrier, the police lobbed tear gas and flash grenades, provoking an angry response that included at least one small gasoline bomb.

Johnson accused a handful of violent actors in the crowd of coming to Ferguson at night to destroy infrastructure and fight with police, then returning home to towns nearby.

"They can go home and their gas stations and their stores are open. Here we have one Quick Trip that burned down and the other one nearby is closed," said Johnson, an African-American who grew up in the area and who took over security efforts after the mostly white local force was accused of using excessive force against blacks.

Malik Shabazz, the head of a black attorneys group who had tried to calm the crowd, told reporters he believed "outside agitators" and anarchists were behind the worst of the violence.

At the peak of Monday night's violence, an angry crowd clogged the street near the burned-out Quick Trip gas station. One man waved a "Yield" road sign.

Several onlookers said they believed many of the people in that crowd of teenage and twenty-something men and women, mostly black, were from out of town and had been looking for a fight.

Others said that the makeup of the crowd had changed over the last 10 days. What began with locals committing crimes of opportunity, like looting, later drew outsiders with little or no connection to the community.

"There are a certain number of people here who are waiting for trouble," said one resident who gave his name only as Leo J. Wearing a T-shirt with the slogan "World Peace," he said he had been observing the protests over the past few days. "Some from away, some from here. I'd say about half and half."