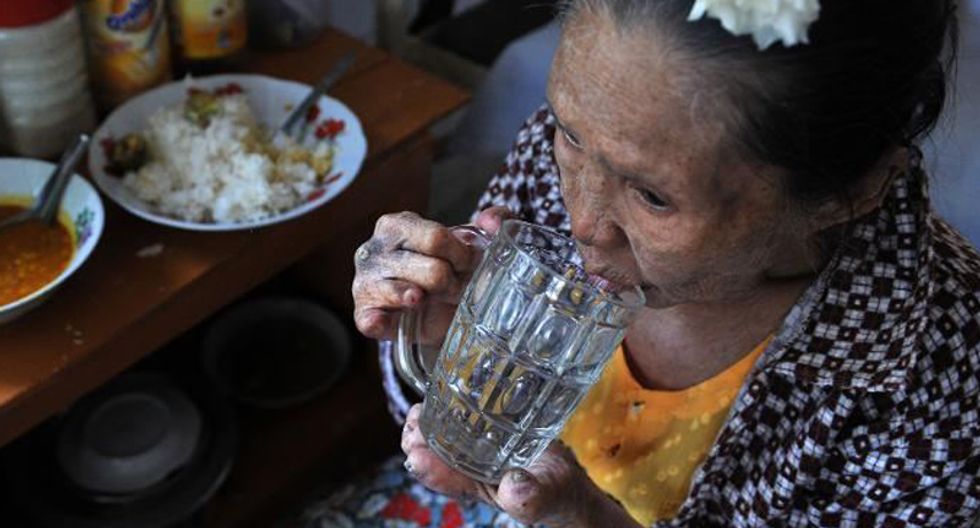 A patient drinks a beverage at the Mawlamyaing Christian Leprosy Hospital in Mawlamyaing on March 13, 2013

High in the hills of Myanmar's war-torn borderlands, a clutch of new leprosy cases among communities virtually cut off from medical help is a sign that the country's battle with the ancient disease is far from over.

It took six days by plane, boat, motorcycle, bus -- and an arduous mountain trek -- for a group of medical workers to treat two leprosy patients in a remote corner of the country, where conflict and neglect are the legacy of decades of military rule and even access to basic medicines is a distant dream.

But the charity-funded medics were also on the lookout for evidence that the disease had spread.

They soon found three more leprosy sufferers, including one man who had such a severe case he required hospital care.

"I promised him that I would come back for him or I would send someone to pick him up," said Doctor Saw Hsar Mu Lar, after the May expedition, as he returned to his hospital in Mawlamyaing, Mon state -- one of only two specialising in leprosy in Myanmar.

Weeks later the patient was still waiting to travel as tensions between the Myanmar army and local rebels closed transportation routes.

Myanmar reached so-called 'elimination' status for leprosy in 2003 -- meaning less than one person per 10,000 has the illness.

But there are still around 3,000 new cases found each year and medical workers warn that the debilitating disease could be on the rise once more as the country's creaking healthcare system fails to reach those at risk.

Decades of civil war in ethnic regions have also left vast swathes of its border areas cut off from all but the most basic medical help, meaning the disease could be passing undetected.

"We have to tell the world that it's not finished yet."

Leprosy is one of the world's oldest -- and most feared -- diseases.

The bacteria affects the skin and deadens the nerves, meaning sufferers are prone to injure themselves, which results in ulcers and can lead to limb loss. Symptoms can take as long as 20 years to appear.

It is not particularly infectious, passing only through close contact over long periods, and modern medicine is able to cure patients relatively quickly.

But Myanmar has one of the world's least developed medical systems, with government funding consistently among the lowest of any country, even with recent increases under a post-junta semi-civilian government.

State health workers are technically in charge of outreach and aid groups are banned from conducting leprosy awareness campaigns or looking for new patients -- although they can treat people they find through dermatology clinics and during follow-up field trips.

The respected local aid group that organised the border expedition asked AFP not to give specific details of their work fearing that it could jeopardise future missions.

Most of the patients AFP met were farmers or had turned to begging to make ends meet.

"We had no medicine at our village even though we had a clinic," said 40-year-old Mu Hai, who had travelled from western Rakhine state for treatment.

"Now cases are increasing... the complication rate is increasing," she said, adding that the age range for the disease had also appeared to have widened, with one four-year-old treated this year.

The fight to stop leprosy has been a major international success, with around 16 million people cured by multi-drug therapy (MDT) medicine in the last two decades.

But experts warn against complacency.

Myanmar is one of 18 countries that together account for almost all new cases of the disease.

The number of new cases it finds annually is dwarfed by its populous neighbour India, where there were some 127,000 new patients identified in 2011 according to World Health Organisation figures.

But while India managed an over 50 percent reduction between 2004 and 2011, Myanmar struggled to reduce its new incidences by 18 percent.

The WHO's goodwill ambassador on leprosy, Yohei Sasakawa, said stagnation in Myanmar's new case numbers over several years could indicate authorities are not doing enough to root out the disease.

One problem is that the numbers affected seem small compared to other health challenges like HIV, tuberculosis and malaria.

"It is quite easy to be brought down the priority list," he told AFP during a recent mission to the country.

Even if patients are cured, many around the world still fall victim to the stigma that clings to the disease, ending up living in segregated colonies.

The Bible says of leprosy sufferers: "he is unclean: he shall dwell alone".

Saw Roger was chased out of his village when he started to show signs of leprosy aged 18 in the 1950s.

"I lived only with the animals in the jungle and I was frightened. I used to go into my village under the moonlight and I took rice and fish paste before going back into the dark forest," the 76-year-old told AFP.

After two years sleeping in the woods, Roger was found by missionaries and taken to the Mawlamyaing hospital.

Roger, whose legs, left hand and eye have been ravaged by the disease, has found sanctuary there ever since.

Passing the time reading and leading the church choir, he said he has found happiness despite a lifetime of travails caused by the illness.

"I can continue to look forward," he added.