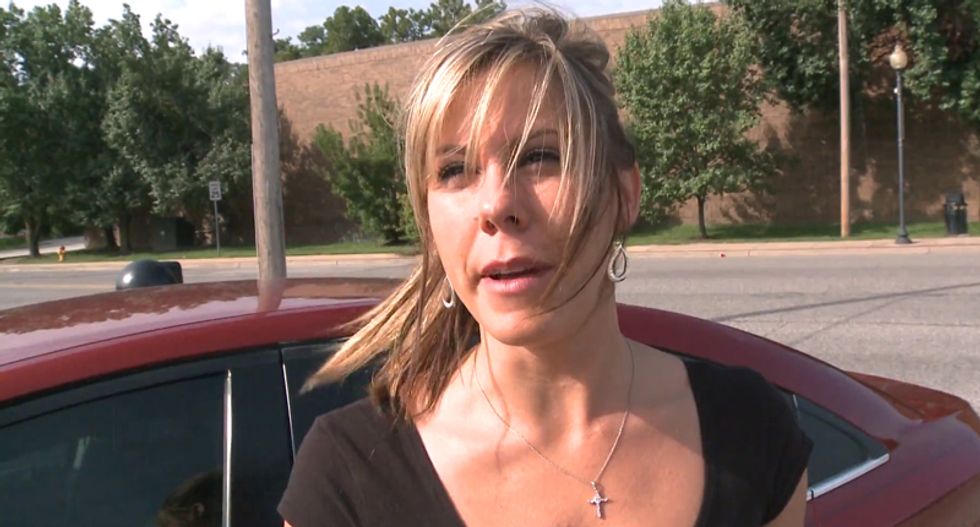 Screenshot from "I Love Ferguson" report featured on NBC News.

Ferguson's white Republican mayor, James Knowles, is clear: he will tell anyone who listens that there is no racial divide in the town, which has been hit by a fortnight of protest over the killing of a young African American, Michael Brown, by a white policeman.

Knowles's predecessor, Brian Fletcher, has a different take. "Sure we're segregated. Most cities are. People want to be with people that look like them, think like them, talk like them. It's human nature. It doesn't mean it's bad," he said. "A lot of communities in the United States are segregated by colour, by economic power, by education. You know the term 'the other side of the tracks'? It's the truth. It's been that way, it is that way and will be that way."

Scott Bonner, manager of the local library, put it another way. "St Louis is a very Balkanised town and I wish it was better," he said.

Ferguson's white minority is feeling besieged. The protests have thrown a spotlight on an overwhelmingly white police force in a town of 21,000 people – two-thirds of them black – with a power structure firmly in white hands.

The nightly protests, which initially had police behaving as if they were on the streets of Baghdad confronting protesters who saw riot gear as further provocation, suggested a city at war with itself.

"This is not us. We don't recognise it. It's not the community we know," Knowles told a public meeting. The tensions were not racial, he said, but economic. And the government was to blame. "When you jam people into low-income housing in one area and you wonder why there are social issues, there's no surprise to that. It's been done to us," he said.

It is a view frequently heard among white residents. Craig Kidd, who works in construction and lives in one of the most integrated neighbourhoods, joined the nightly demonstrations. "I think that cops who don't know how to use guns should be disarmed," he said. "It wasn't just the Michael Brown shooting. The second shooting [in St Louis of Kajieme Powell] was shocking. The police created chaos at the demonstrations. Using teargas was horrible. Clearly they can't be trusted."

Kidd sees divisions mostly on class lines. "I think that in a town which is two-thirds black there's going to be more poor black people than white," he said. "I live in a poorer neighbourhood. I never felt anybody was hating on me because I'm white."

Steve Hewkin, who lets 20 properties as low-income housing, blames the government for dumping poor people in the city. "You end up renting to the least worst," he said. "Obama has destroyed the economy. The jobs are gone. The American dream is gone. These people have no hope and he put them here."

Hewkin, who said he assumes he's on a government watch list because he's a "white Christian gun-owner that believes in liberty", says he doesn't regard people who move from outside the city into low-income housing as even being part of Ferguson. "That over there isn't even our city. People in Ferguson don't even know they're there. Listen to those people talk, they're haters," he said.

Many African Americans in the city say part of the problem is that no one is listening to them. They describe themselves as virtually invisible other than to be viewed as a problem. And while Knowles has tried to suggest that those who are disgruntled are transient outsiders with few links to the city, that ignores the anger that has been fermenting among many of Ferguson's long-term black residents.

Fletcher, the former mayor, was among leading citizens who called a public meeting at a Baptist church to talk about the crisis. He told the audience: "I'm like a lot of African Americans in reality. I grew up in poverty. I can relate a little bit to what it is to struggle in life."

The meeting was intended to consider ways to bridge divides but, while the church was close to full, fewer than a dozen black people attended. Fletcher struggled to explain why. "I don't have an answer. They're welcome. It's not uncommon in the community for African Americans not to be involved. Perhaps their struggle is just surviving the day, feeding their family," he said. But black people on the streets of Ferguson said they didn't know about the meeting because almost no effort had been made to communicate with them.

White people at the meeting lined up to offer suggestions, from how to "meet someone who's different from us" to programmes to help people "rise and become part of the community". But at times it felt as if the participants were stumbling in the dark looking for answers without knowing the question.

No one in the church mentioned the conduct of the police – the issue at the forefront in much of the rest of Ferguson – until one of the few black men in the audience, Byron Conley, brought it up. "I didn't see our police officers coming out to talk to the kids. I'm asking every officer to come to my street and just say 'hi' to us," he said. Conley said he invited police officers to barbecues but they never came, which surprised white members of the audience who said they regularly turn up to theirs.

There was praise for existing programmes such as the Ferguson Youth Initiative, which gives young people the chance to earn a bike or a computer. But, tellingly, it also offers a community service programme for youths as an alternative to jail terms or fines.

One of the most sensitive issues is how to get more African Americans to vote in order to change the complexion of the council. Some spoke about helping to find black candidates for office. But Hewkin was not so sure, fearing that it might contribute to "white flight". "Check out the towns where it's all black councils and whites are run out. It's not about race; it's about the job they're doing," he said.

But then he said that may not happen in Ferguson because Obama has destroyed the economy. "Who the hell's going to buy your house? You couldn't give it away," he said.

Watch a report about Brian Fletcher's "I Love Ferguson" campaign from MSNBC below: