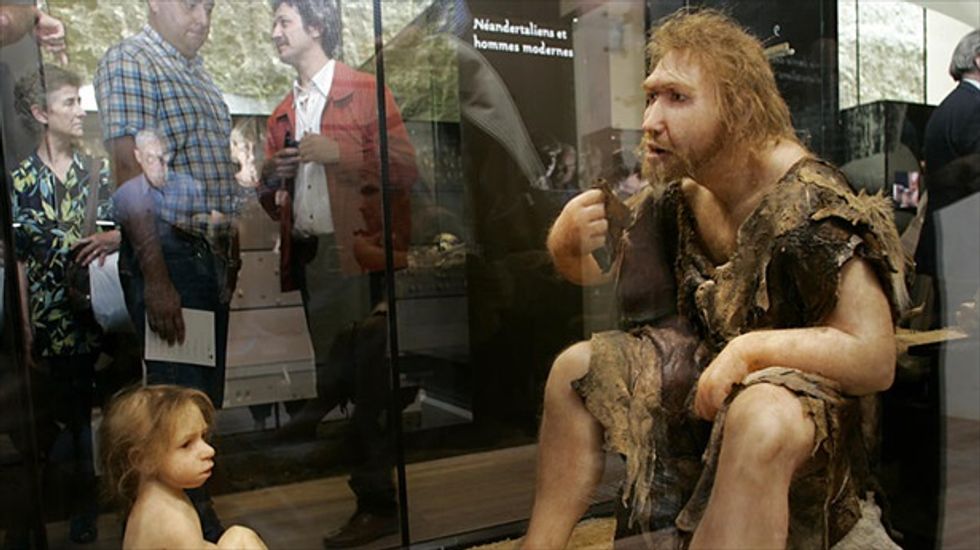 The reconstruction of a Neanderthal man is on display at the Museum for Prehistory in Eyzies-de-Tayac on July 19, 2004 (AFP)

Neanderthals snacked on pigeons that they had toasted on open fires, according to researchers, adding to the menu of foods known to be eaten by our closest ancient relatives.

Leftovers of Neanderthal feasts were discovered in sediments that built up over millennia in the huge Gorham's Cave on the east face of Gibraltar, where generations of Neanderthals sheltered for nearly 100,000 years.

Workers at the site unearthed a haul of pigeon bones and found that some bore tooth marks, cuts from stone tools or signs of charring, perhaps created when the meat was left to cook on the glowing embers of a fire.

Most of the tell-tale marks were on pigeon wing and leg bones where much of the meat was to be had. Some of the thicker bones had tiny puncture marks from smaller, needle-like bones which can happen when chicken wings are twisted apart to get at the meat.

The findings add to a growing body of evidence that Neanderthals had more on their minds at dinner time than large mammals. Those living in the caves of Gibraltar left behind butchered bones from seals and dolphins, and even had shucks for prising open shellfish.

"The picture that is emerging is that Neanderthals had a diverse larder outside their cave window and they were exploiting all these things," said Clive Finlayson, director of the Gibraltar Museum, who took part in the latest study. In June, researchers at MIT reported evidence from 50,000-year-old Neanderthal poo that those living in southern Spain ate plants too.

Finlayson's team decided to check whether birds were on the menu after they unearthed piles of bird bones at Gorham Cave, where excavations have been going on for the past 25 years. At the latest count, 150 ancient bird species had been identified from bones found in the cave sediments.

Today, the cave sits squarely on the shore, beneath a spectacular cliff face that rises up more than 400 metres. But when Neanderthals occupied the cave, sea levels were lower and the sea may have been several kilometres away. From the entrance, the occupants would have looked out on a sandy plain broken up by wetlands and open areas where stone pine and juniper grew.

The majority of bird bones at Gorham's Cave belong to rock doves, the wild ancestors of modern feral pigeons. For the latest study, the researchers looked at 1,724 rock dove bones found in sediments ranging from 67,000 to 28,000 years old.

Close examination of the bones found cut marks on 28 pigeon bones and tooth marks on 15 that dated from Neanderthals times. Other bones had burn marks. The more recent remains had similar marks made by modern humans who lived in the cave when the Neanderthals died out. While only a small portion of the bones had human marks, Finlayson said even those were unexpected.

"When you consider that pigeons are quite small, it is amazing that any cut marks should appear," he said. Neanderthals could have pulled pigeons apart, unlike larger animals, without needed to cut them up first. "Maybe they are defleshing the animal and the stone knife slips and leaves a mark," he added.

Burn marks left some of the bones unevenly discoloured, which may have happened when wing or leg bones were cooked. "We think they are putting them on embers in the fire. If you have a bone with lots of muscle on one side, the bone more exposed to the fire becomes more cremated," said Finlayson.

The researchers say the oldest bones they studied cannot have been damaged by modern humans. "There is absolutely no doubt that this was the Neanderthals. And they could not have learned this from modern humans because there weren't any modern humans in Europe 67,000 years ago. They must have come up with this on their own," Finlayson said. A report on the work entitled "The earliest pigeon fanciers" appears in Nature Scientific Reports.

What the scientists cannot explain is how they managed to bag so many birds. Rock doves nest on cliff faces and the Neanderthals may have climbed up and raided the birds' nests. But Finlayson is doubtful of that: there are simply too many bones, he said.

"I'm speculating, but I think they must have had snares or nets or some other trapping techniques that were made from perishable materials such as grasses and fibres," he said. "But it would be very difficult to find traces of those."

Researchers now plan to examine thousands of other bones unearthed at the site to see if Neanderthals were partial to other kinds of feathered food.

'Chilling': 4 of the most shocking revelations from a new book about Trump's war with his generals

A new crop of books about Donald Trump and his final days in office is set to be published in the coming months. One such book, "The Divider: Trump in the White House," from veteran reporters Peter Baker and Susan Glasser, was excerpted in The New Yorker on Monday morning, complete with a previously unpublished resignation letter from General Mark Milley, Trump's final secretary of defense.

After mostly refraining from publicly criticizing Trump, top Trump officials are now running to make their disagreements with him clear. In response, Trump now says the men who he once boasted were "my generals" are "very untalented people and once I realized it, I did not rely on them, I relied on the real generals and admirals within the system."