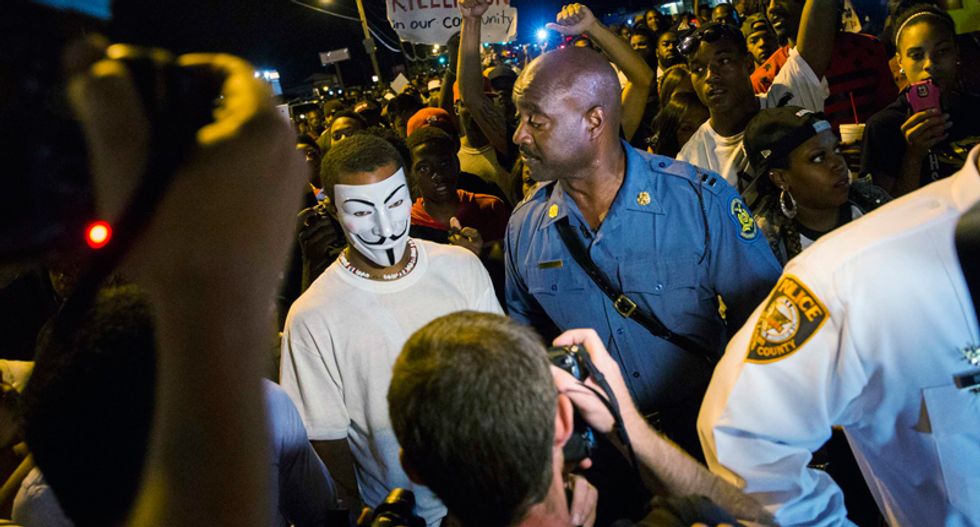 Missouri State Highway Patrol Captain Ron Johnson speaks to a protester wearing a "Guy Fawkes" mask while he walks through a peaceful demonstration as communities continue to react to the shooting of Michael Brown in Ferguson, Missouri August 14, 2014. REUTERS/Lucas Jackson

Conservatives and a CNN iReport incorrectly concluded that Missouri Highway Patrol Capt. Ron Johnson was in a gang after seeing photos of him making hand gestures to support his fraternity, Kappa Alpha Psi.

The Washington Post on Wednesday fact checked the assertion made by a CNN iReport that photos of Johnson, who was appointed by the governor to take over security operations following protests over the death of Michael Brown in Ferguson, proved that he had been a member of the Bloods gang.

The iReport, which CNN had scrubbed from its website, was circulate on Twitter by user DixielandDiva, who tweeted, "BLACK Capt. Ron Johnson and his gang signs needs to resign."

The misinformation reportedly spawned a Facebook page calling on Johnson to step down, and also spread to other websites.

The Twitter account was eventually deleted, but not before dozens of tweets mocked the user for not realizing that Johnson's hand gesture was a Kappa greeting.

"When did Kappa Alpha Psi become a gang?" one person asked.

Other tweets were not as polite: "Research Kappa Alpha Psi u stupid f*ck."

"'Dixie'. yeah you're not racist," Twitter use firefire100 quipped.

The Post noted that Johnson seemed to be facing the same type of "cultural illiteracy" as slain teen Michael Brown, who was also thought to be flashing a gang sign, which turned out to be a peace sign.

"Some would say black folks must constantly prove their humanity or, at the very least, explain black American culture — sometimes a comically Sisyphean task," the Post's Soraya Nadia McDonald wrote.

Guns Activism Whoa!
Please contact support@rawstory.com for customer support or to update your subscription. Report typos and corrections to: corrections@rawstory.com.