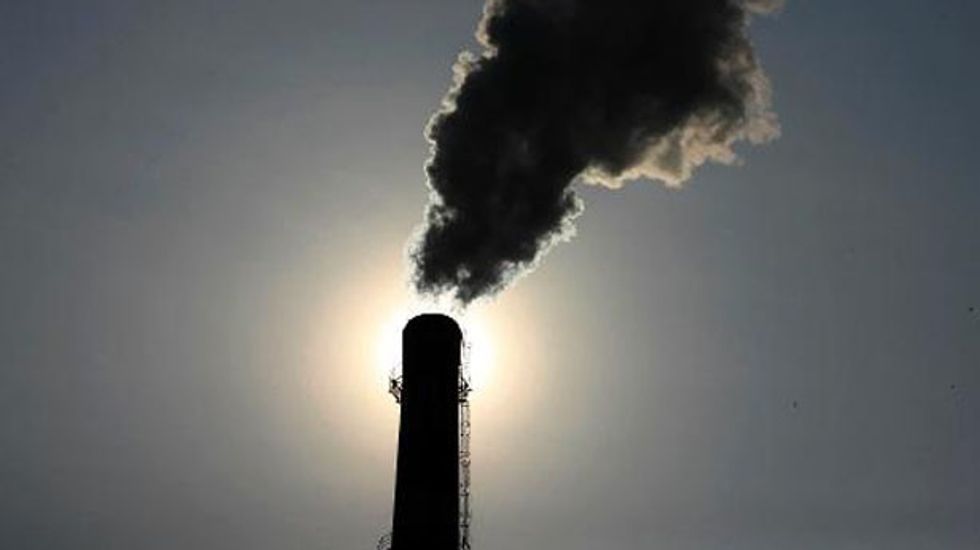 It seems straightforward to say that when you buy a new car by taking out a loan, you’re committing to spending a certain amount of your income per month on that car for a specific period of time.

Of course, by buying that car, you’re also committing to polluting the atmosphere with some amount of carbon dioxide. But how often do car buyers make that calculation?

The same can be said for coal-fired power plants, which spew billions of tons of climate-changing CO2 into the atmosphere each year, and continue to be built across the globe.

Coal-fired power plants are the largest contributors to the atmospheric CO2 concentrations,  which last year reached 400 parts per million (ppm) for the first time in human history — up from 280 ppm in pre-industrial times.

While utilities account for operating costs, few ever calculate how much CO2 those power plants will emit into the atmosphere during their lifespans, according to a new studyconducted by Princeton University and University of California-Irvine.

That’s a huge problem for the climate because more new coal-fired power plants have been built worldwide in the past decade than in any previous decade, with no sign of slowing down, the study says.

In other words, the power plants operating today are committed to emitting 300 billion tons of CO2 in the future, enough to contribute an additional 20 ppm of CO2 to the atmosphere globally, Princeton University professor emeritus of mechanical and aerospace engineering and study co-author Robert Socolow told Climate Central.

Estimating future emissions is called “commitment accounting,” according to the study.

When those existing coal-fired power plants are shut down, current trends in China and other developing nations suggest that new ones will replace them, committing the globe to even more CO2 emissions at a time when the climate can least tolerate it, Socolow said.

Calculating CO2 emissions commitments from power plants is almost never done because CO2 emissions are reported to the United Nations based on emissions in a single year rather than those expected in future years, the study says.

“Bringing down carbon emissions means retiring more fossil fuel facilities than we build,” study lead author Steven Davis, assistant professor of earth system science at UC-Irvine, said in a statement. “But worldwide, we’ve built more coal-burning power plants in the past decade than in any previous decade, and closures of old plants aren’t keeping pace with this expansion.”

In the U.S., the Obama administration has set a goal under the Clean Power Plan to slash CO2 emissions from existing coal-fired power plants 30 percent below 2005 levels by 2030.

The study says that despite international efforts to reduce CO2 emissions, the global power sector’s CO2 commitments are growing 4 percent each year, and have not declined at all since 1950.

“Remaining commitments have gotten bigger and bigger every year without exception,” Davis said. “We’re not at the point where power plants alone will emit 30 billion tons if they run 40 years.”

Damon Matthews, Concordia University chair in climate science and sustainability who reviewed the study prior to publication, said the study is a new way of thinking about power plant emissions.

“If we can account for committed emissions over a lifetime of a plant at the time it is built, this may change the equation about what type of power plants it makes sense to invest in,” Matthews said.

Stephane Hallegatte, senior economist in the Climate Change Group at the World Bank and a reviewer of the study prior to publication, said the study is crucial because it creates an indicator to help policymakers understand the long-term consequences of their decisions.

“Indeed, the problem is that we have invested and continue to invest in infrastructure and equipment — including power plants — that emit and will emit for a long time,” Hallegatte said. “Because of the long lifetime of these investments, reducing emissions in 2030 requires an action that starts as soon as possible.”

Accounting for future CO2 pollution commitment is critical for policymakers and the power sector to better understand their role in a changing climate and what can be done to reduce CO2 emissions globally, the study says.

It’s possible some of power plants may not be used for their life expectancy, but that’s a rare occurrence, Socolow said.

“Of course, we can retire plants before the end of their natural lifetime or retrofit them with new technology,” Matthews said. “But this is expensive to do, so we can’t assume that will happen.”

Socolow said one of the things he hopes the paper will do is prod the UN reporting system to account for future emissions. The electric power industry has no good data on emissions, and emission estimates reported to governments are usually based on the amount of coal bought and sold rather than measurements of actual emissions at power plants, he said.

“The result of this paper’s analysis — namely the rapid increase in committed emissions — shows that actions to direct new investments toward cleaner technologies are even more urgent than what emissions alone suggest,” Hallegatte said.