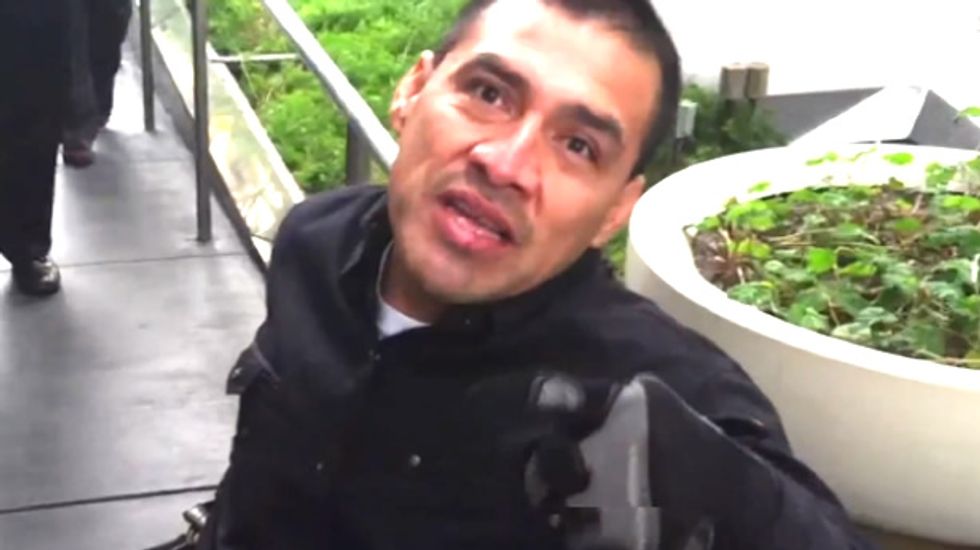 A notorious Southern California "professional plantiff" who made almost $1.2 million by suing local business owners over 800 times has been deported to Mexico, KABC reported yesterday.

Alfredo Garcia severed his spinal cord in 1996 after he fell out of a tree while picking avocados. At the time of the accident, Garcia was both intoxicated and high on cocaine. In the 18 years since, he has made a living suing businesses for failing to comply with the Americans with Disabilities Act (ADA).

Eyewitness News reported that the majority of the businesses targeted by Garcia are "small mom-and-pop type businesses," though he has filed suits against national corporations like Wal-Mart, Bank of America, and Jamba Juice.

Garcia's modus operandi is to find businesses with minor ADA violations -- like fixtures in a restroom that are inaccessible to wheelchair-bound individuals or disabled parking spaces without a ramp for wheelchair access -- and then settle with the businesses before the case goes to trial.

In 2011, he sought $5,000 in damages from Yogurt Stop, arguing that the height of a coat hook violated the ADA. At the time, Yogurt Stop owner Misti Cooper said "the city of West Hollywood has very strict guidelines when it comes to ADA. We followed it to the tee. Everything in here is done perfectly, until we get to the hook in the bathroom, which seems ludicrous."

Garcia's typical haul in these out-of-court settlements is $2,000, and it is pure profit, as he is usually able to convince the court that he lacks the funds to pay court fees.

Jim Link, an attorney who defended numerous local businesses against Garcia's lawsuits said that the suits "amount to legalized extortion," then added that "there's a huge fraud on the system when it comes to these serial litigants who are making tremendous amounts of money, but not paying the court system that they're using to collect this money."

To date, Garcia has made $1.2 million via these lawsuits, and has convinced the court system to waive $213,502 in court fees. After an earlier Eyewitness News report on these waivers, the Los Angeles Superior Court stopped rubber-stamping his waiver applications and demanded he pay half his court fees.

He stopped filing lawsuits for almost a year before discovering a loophole that allowed him to avoid paying court fees again.

In 2011, he was arrested for immigration violations, but it's taken nearly three years for his numerous appeals to work their way through the court. His last appeal was dismissed in February, and Eyewitness News learned that he was finally deported in June, after Immigration and Customs Enforcement agents worked out a deal "to ensure he would receive continuing healthcare following his repatriation."

Watch the entire Eyewitness News investigative report on Garcia and his deportation on ABC 7.