Fox doctor who called Michelle Obama Fat should read his own book, "Projection" 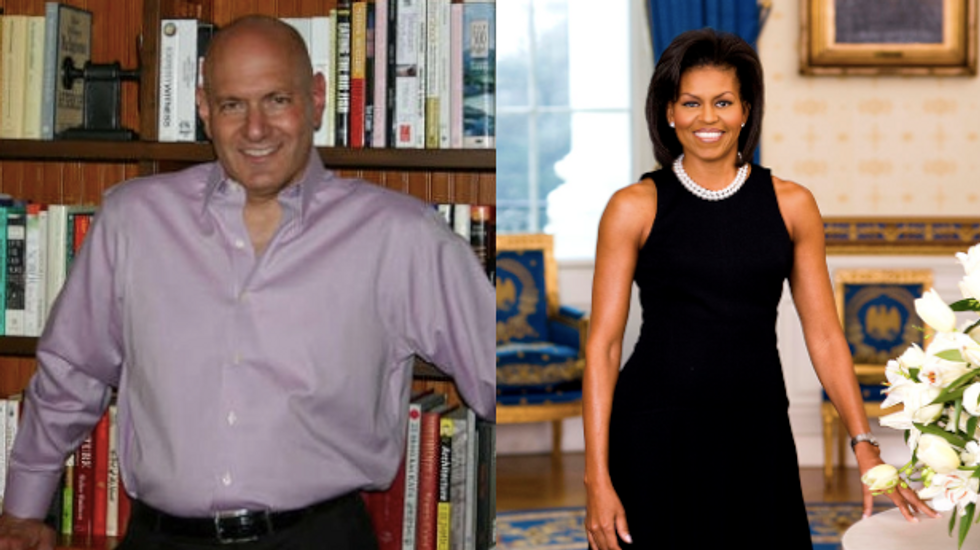 What is she eating? She needs to drop a few.... We’re taking nutritional advice from who? Let’s be honest. There’s not French fries? That’s all kale and carrots? I don’t buy it.

Out of respect for the doctor, let us follow his lead and ask the rhetorical question, "we're taking nutritional advice from who?" (In his hurry to speak the truth, Dr. Ablow omitted the "m" at the end of "whom. But I digress.) Here is my Ablovian Assessment (an assessment made without having met, or examined a patient, based on political agenda, rather than medical training or knowledge):

Specialty: Ablow is not a nutritionist. Nor is he an endocrinologist. He is a psychiatrist with no special training in anything related to Michelle's body weight whatsoever.

Track Record: Ablow has an impressive record for getting things wrong. He claimed, for instance, that Joe Biden's performance in the 2012 vice-presidential debate suggested signs of dementia or drunkenness.....

And he argued that Newt Gingrich's history of marital infidelity made him a great presidential candidate:

1) Three women have met Mr. Gingrich and been so moved by his emotional energy and intellect that they decided they wanted to spend the rest of their lives with him.

2) Two of these women felt this way even though Mr. Gingrich was already married.

3 ) One of them felt this way even though Mr. Gingrich was already married for the second time, was not exactly her equal in the looks department and had a wife (Marianne) who wanted to make his life without her as painful as possible.

Conclusion: When three women want to sign on for life with a man who is now running for president, I worry more about whether we’ll be clamoring for a third Gingrich term, not whether we’ll want to let him go after one.

Interestingly enough, Hillary Clinton's one and only marriage made her unfit for public service. As he stated, "her entire reputation as a national figure came from living in the White House and sleeping with the president.”

Eschewing the adage "she shouldn't have worn that dress," the good doctor decided to update it, arguing that if girls  didn't want to get harassed by boys, including, apparently, his son, they shouldn't wear leggings:

You cannot come in with leggings. Because my son wants to learn and the truth is it is distracting. And it is

kind of inappropriate because when did we decide as a culture that tights would become an overgarment instead of an undergarment. The reason we're doing that is because girls are in a panic to be more and more sexual because we've taken all the restraint away from femininity. We've made girls into boys.

ABLOW: I don't know that we can restrain boys from being boys. So the long stare, the offhand comment, you have to -- what do you do, excuse it? Because it was certainly provoked. And I think girls put themselves in the line of fire that way.

Reputation: His claims are disputed by people like President of the American Psychiatric Association and even to even Fox News's own Megyn Fox.

Self-diagnosis: Self-Assured non-pedophile. He once said, unprovoked,  “I

assure you I’m not a pedophile at all.” Though there is this.... (see photo to the left)

Prescription: read your own book Projection and follow the First Lady's nutritional advice. advice. (And don't call me in the morning.) You will look better and feel better in general and, most importantly, about yourself. This is where the healing starts! Physician, heal thyself.