Fox finds a way to blame Al Sharpton for Ferguson: People 'continue to riot' if he comes 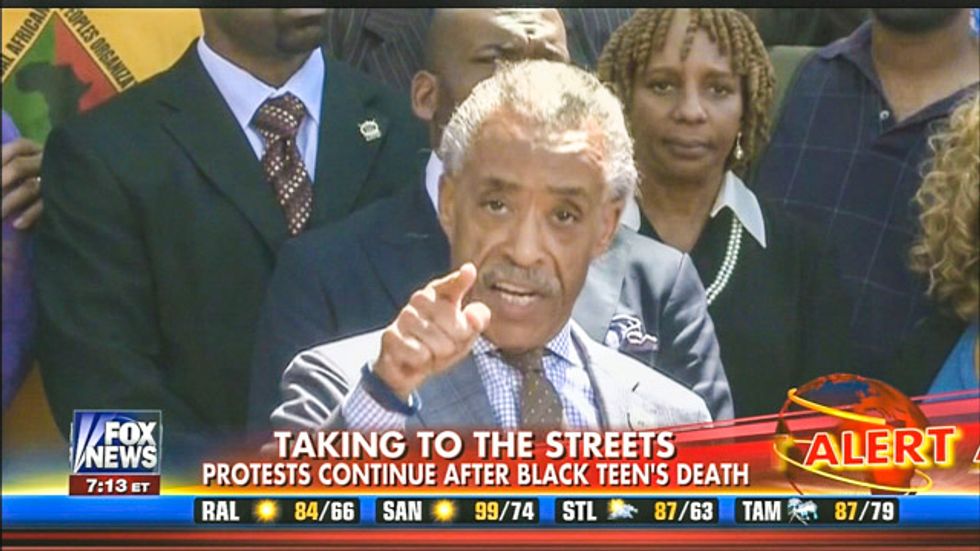 Fox News on Thursday brought in multiple guests who pointed to MSNBC host and civil rights activist Al Sharpton as one of the main causes of trouble in a Missouri town where an African-American teen was shot to death by police.

After a night of police clashing with protesters in Ferguson over the death of 18-year-old Michael Brown, the hosts of Fox & Friends seemed most interested in the fact that members of the black community were criticizing black protesters.

One video obtain by Fox News showed an African-American blogger lashing out at black protesters for blaming "the police and white folks for our actions."

"He's echoing the sentiments of many black conservatives," Black Sphere Executive Director Kevin Jackson told Fox News. "And what's interesting to me is when Sharpton came in -- and I'm standing on the very hallowed ground that he was on yesterday -- when he comes in, nobody's really talking about the problems that get created by this."

Fox News host Clayton Morris suggested that Sharpton had chosen to focus on high profile cases, instead of "bringing the light of the camera" to show the violence in Chicago. In fact, Sharpton has rented an apartment in Chicago, held a town hall event, and aired news reports about the violence there.

"Many say it's a political opportunity to roll into a city like this," Morris said of Sharpton's trip to Ferguson.

"Oh, there's no question," Jackson agreed. "He said all the right things because he wants to appear to be the true black leader, you know, that he falsely represents. But the fact of the matter is, he, Barack Obama and Eric Holder really should have been talking about the bigger issue, which is, I think, law enforcement, and how this all occurred, and the moral decay that's occurring in neighborhoods like this."

"So you think the big picture is not so much the [shooting] incident, which needs to be examined, it is what's going wrong in the inner city," co-host Brian Kilmeade observed.