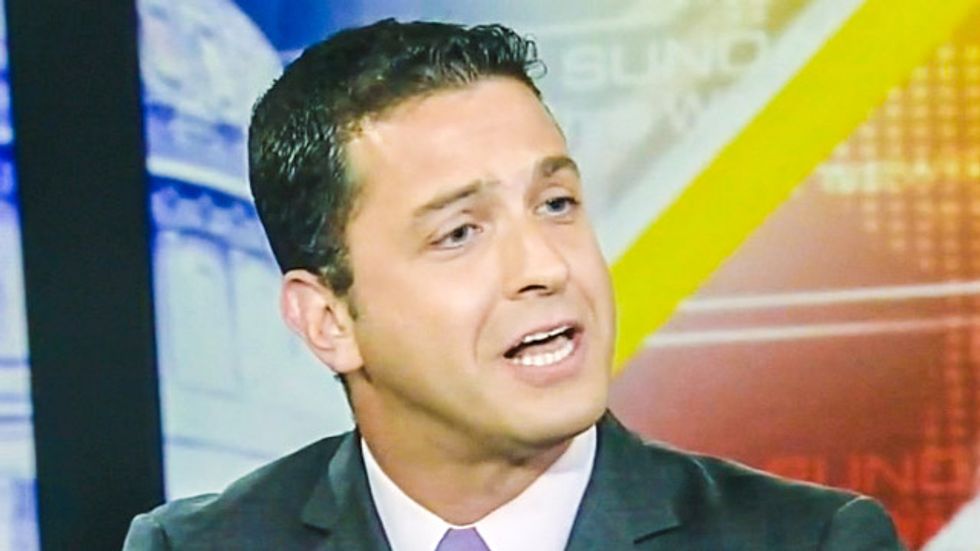 Fox News analyst Juan Williams on Sunday confronted the CEO of the Heritage Foundation for his role in "demonizing" President Barack Obama to the point that many all-white tea partiers were calling for impeachment.

"The trouble with a lawless president is it's very difficult to constrain him because he doesn't care about the law," Needham opined. "He's totally out of control."

Needham argued that Republicans were suing Obama instead of impeaching him because "they're trying to find a way to constrain a lawless president."

Williams, however, said that it was exactly that kind of talk that was creating a groundswell for impeachment.

"You listen to Michael, and you understand why there are lots of Republicans who think, 'This man's a demon, this guy's awful, we got to get this guy out of here any way we can, he's breaking the law,'" Williams explained. "I hear this on talk radio, I hear this in conservative columns, that people are saying they think this guy's way over the line. And then they say, we got to find a way to get him."

"And then you hear from Sarah Palin, Michele Bachmann and others, 'Yes, we use the impeachment word,'" the Fox News analyst continued. "And then you come on and say, 'Oh, no. We're not talking about impeachment, that's the Democrats.' All the Democrats are doing is taking advantage of the fact that you guys have demonized President Obama to this extent."

Williams also pointed out that many minorities saw the impeachment talk as "an attack on the first black president," and "it's unfair so it's going spur their turnout in midterms which is going to be critical in several races."

Wallace interrupted to ask Williams to clarify whether or not racism was driving impeachment.

"Well, all I can do is look at the numbers," Williams replied. "If you look at the core constituency of people, let's say, who are in tea party opposition support of impeachment, there's no diversity. It's a white, older group of people."

"I would say, if you just break it down as a matter of political analysis and say who is this group, it reminds me that the Republican Party has become almost a completely white party," he observed.

Needham seemed shocked that he was being accused of "demonizing" the president.

"Because I'm saying the president of the United States is lawless, which by the way, the Supreme Court agreed with," Needman remarked. "You're the one demonizing people who are concerned about the fact we have a crisis of the Constitution!"

"The people who want him impeached, they're all white!" Williams exclaimed. "And they're all older. And guess what? They're all in the far right wing of the Republican Party."

"And he might have well just said, 'And they're all racists,'" Needham quipped.