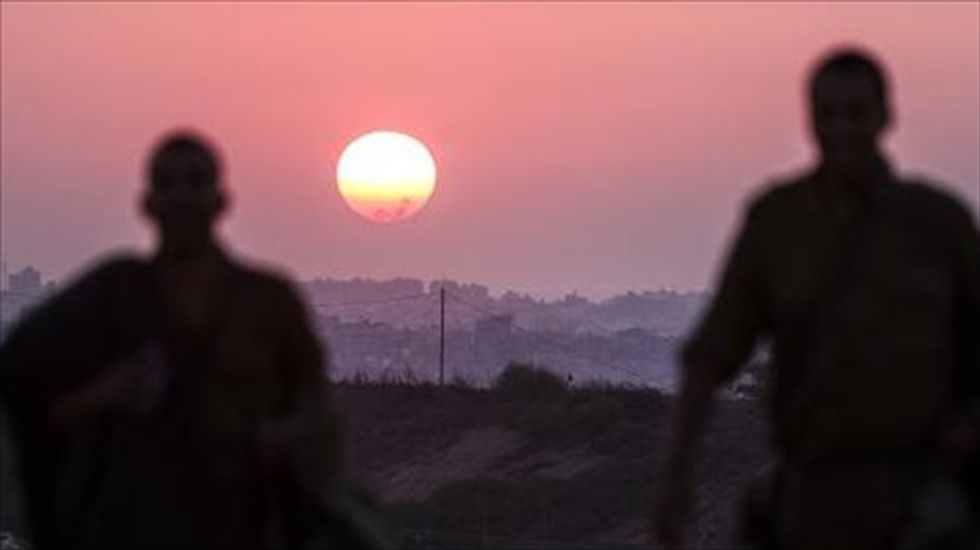 Jerusalem (AFP) - Israel and Hamas said they have agreed a new 72-hour truce starting on Tuesday, after increasingly vocal world demands for a ceasefire in the bloody Gaza conflict.

The apparent breakthrough came during talks in Cairo on Monday, only days after a similar three-day truce collapsed in a deadly wave of violence within hours of starting on Friday.

Images of the bloodshed -- which has cost more than 1,800 Palestinian lives, and 64 Israeli soldiers in and near Gaza and three civilians in Israel -- have sent tensions in the region soaring, earning the Jewish state strong criticism.

"How many more deaths will it take to stop what must be called the carnage in Gaza?" French Foreign Minister Laurent Fabius asked, as Britain said it was reviewing licences to sell arms to Israel.

Israel and Hamas separately confirmed to AFP each agreed to abide by the new 72-hour ceasefire.

"Israel will be honouring the ceasefire from tomorrow (Tuesday) at 8:00am (0500 GMT)," an Israeli official said on condition of anonymity.

"Hamas informed Cairo a few minutes ago of their approval of the truce for 72 hours from tomorrow," a spokesman for the group, Sami Abu Zuhri, said.

Previously on Monday, Israeli Prime Minister Benjamin Netanyahu had said there would be no end to the Gaza military operation without first securing a long-term period of calm for his people.

"The campaign in Gaza is continuing," he said at the end of a seven-hour unilateral humanitarian lull that saw violence subside. "This operation will only end when quiet and security is established for the citizens of Israel for a prolonged period."

Violence even hit west Jerusalem on Monday, with police saying they had foiled a "terror attack" when a Palestinian rammed an earthmover into a bus, killing one before being shot dead himself.

But after the unilateral Israeli truce ended on Monday, Palestinian factions meeting in Cairo, including Hamas, were already working on another ceasefire.

A senior Egyptian official was the first to say that both the Israeli and Palestinian sides had accepted an Egyptian plan for the new 72-hour truce starting on Tuesday morning.

"Egypt's contacts with relevant parties have achieved a commitment for a 72-hour truce in Gaza starting from 0500 GMT tomorrow morning, and an agreement for the rest of the relevant delegations to come to Cairo to conduct further negotiations," the official told AFP.

On the ground in Gaza, Israeli forces had largely observed the unilateral seven-hour pause in their offensive on Monday.

The humanitarian window got off to a shaky start with an air strike levelling a house in a beachfront refugee camp in Gaza City, killing three people, among them a nine-year-old girl.

"There is no truce. How could there be a truce?" raged Ayman Mahmud, who lives in the neighbourhood.

"They are liars! They don't even respect their own commitments!"

Gaza medics said they retrieved 32 bodies from the rubble.

Hamas did not observe the truce, firing 42 rockets over the border during the pause, 24 of which hit Israel and another one which was shot down, the army said.

The Israeli military later said it still has many missions to carry out in Gaza despite destroying all of the known tunnels militants use to attack its territory.

"We will not leave; we will stay in the Gaza Strip. There are many more missions to complete," army spokesman Moti Almoz said on television.

"All of the tunnels we have located have been destroyed," he said, adding however that "talking about the end of the mission against the tunnels doesn't mean talking about an end to the Gaza mission."

Israel launched the military operation against rocket-firing militants in Gaza on July 8, and nine days later it sent ground troops into the enclave to destroy the network of sophisticated tunnels.

The truce announcement came after international outrage grew over an Israeli strike near a UN school on Sunday that killed 10 people, in the third such strike in 10 days.

With UN figures indicating most of the 1,865 people killed in Gaza so far were civilians, the world has stepped up its demands for an end to the bloodshed.

In Paris, France's top diplomat, an increasingly vocal critic of the war, demanded the world impose a political solution to end "the carnage".

His remarks came a day after the UN denounced a fresh strike on one of its schools which was sheltering 3,000 refugees as "a moral outrage and a criminal act", and the United States said it was "appalled".

Israel said it had targeted three militants near the school and added it was investigating the strike.

Russia's top diplomat Sergei Lavrov also added his voice to growing calls for an agreement to end the violence, his ministry said Monday.

In Jerusalem, one Israeli was killed and five hurt when a Palestinian rammed an earthmover into a bus, turning it over before the driver was shot dead by police, according to Israeli officials, describing it as a "terrorist attack".

Shortly afterwards, an Israeli soldier was shot and seriously wounded near a bus stop not far from the site of the earlier attack, with police combing the area for his attacker.