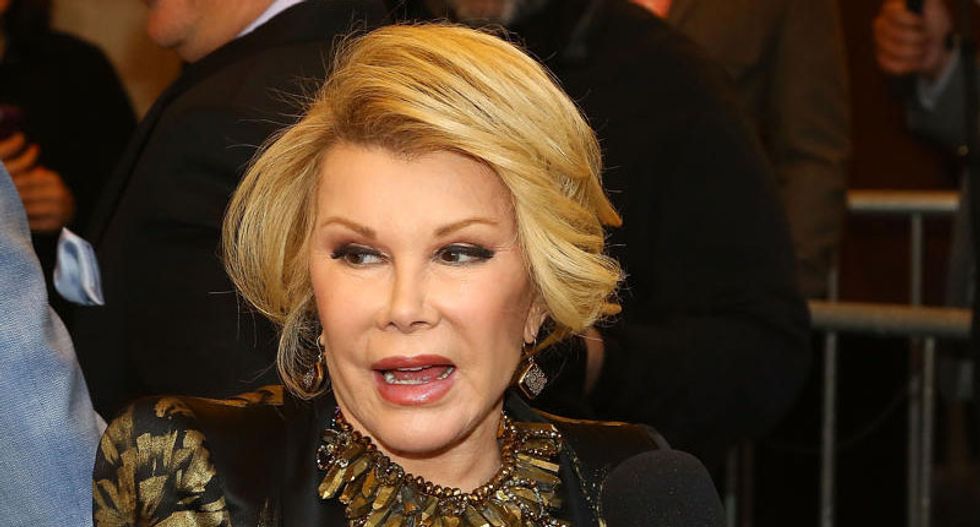 Joan Rivers, the tart-tonged US stand-up comic renowned for her rapier wit, was rushed to hospital with a possible cardiac arrest on Thursday but was in a stable condition, reports said.

US media said the 81-year-old Rivers stopped breathing while undergoing surgery on her vocal cords at a clinic in New York's Upper East Side and was taken to Mount Sinai Hospital.

A spokesman for the New York Fire Department told AFP that officers responded to an emergency call at 9:39 am (1339 GMT) after a woman suffered a possible cardiac arrest.

The patient was taken from 201 East 93rd Street, the address of Yorkville Endoscopy clinic, to Mount Sinai, he said.

The E! television channel on which Rivers hosts the show "Fashion Police" later reported that she was in a stable condition after suffering "complications from throat surgery".

"Our own lovely living legend Joan Rivers is in stable condition at My Sinai hospital," tweeted E! journalist Ken Baker.

Celebrity news site TMZ earlier reported that Rivers was in critical condition after she stopped breathing. Her daughter Melissa was reportedly en route to New York.

Rivers earlier this week filmed a special 90-minute episode of "Fashion Police" and has a string of appearances scheduled in the coming weeks, followed by a UK tour in October.

Born in Brooklyn and a long-time New York resident, Rivers has spared no one her razor-sharp wit and is considered one of the best at delivering a cutting one-liner with a well-timed zinger.

The E! network reported that the surgery was "a minor endoscopic procedure" performed under sedation to check her vocal cords.

In recent decades, Rivers has been well-known for her love of multiple plastic surgeries, taken to excess with her exaggerated cheek bones and her preternaturally wrinkle-free face.

Born Joan Alexandra Molinsky, she graduated from New York's Barnard College and worked in the fashion industry before starting out in stand-up under the stage name Joan Rivers.