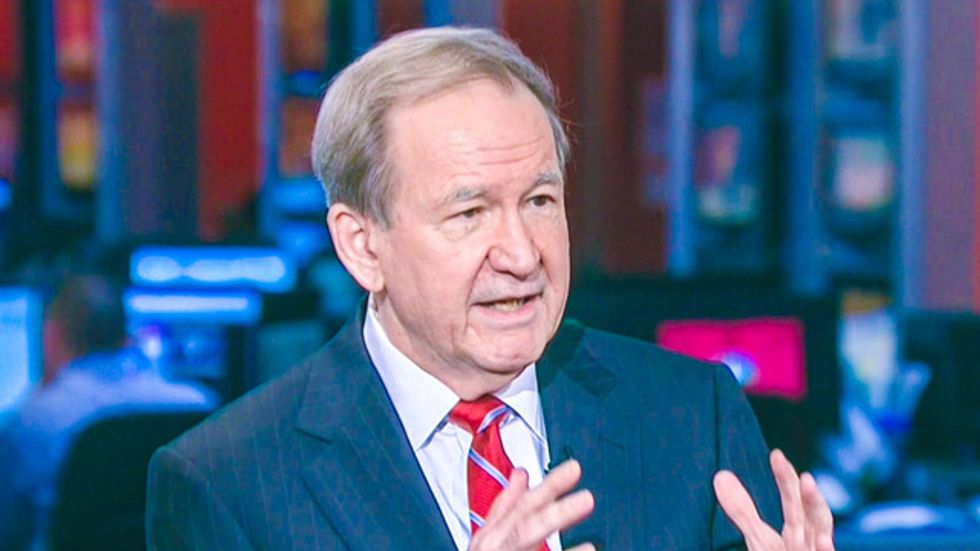 Conservative author Pat Buchanan was fired by MSNBC in 2012 over a book that many liberals considered to be racist, but he returned to the network on Monday at the invitation of host Joe Scarborough.

Scarborough's affection for Buchanan was evident as Morning Joe opened the segment with "Welcome Back," the theme song from the 1970s sitcom Welcome Back, Kotter.

Over the course of the nearly 20-minute segment, Buchanan was given a platform to sell "The Greatest Comeback," his latest book about President Richard Nixon. Scarborough even suggested that viewers would be seeing more of Buchanan "soon."

In 2012, MSNBC had suspended Buchanan over his book "Suicide of a Superpower," which contained a chapter titled "The End of White America." Network President Phil Griffin said that the book should not be "part of the national dialogue, much less part of the dialogue on MSNBC."

Four months after the suspension, MSNBC announced that Buchanan had been dropped.

Liberal groups asserted that he had deserved to lose his jobs for years of controversial comments about minorities, LGBT people, and even praising Adolf Hitler.

“Everyone at Morning Joe considers Pat Buchanan to be a friend and a member of the family. Even though we strongly disagree with the contents of Pat’s latest book, Mika and I believe those differences should have been debated in public," Scarborough wrote on his Politico blog. "An open dialogue with Morning Joe regulars like Al Sharpton and Harold Ford, Jr. could have developed into an important debate on the future of race relations in America."

“Because we believe that sunlight is the best disinfectant, Mika and I strongly disagree with this outcome," the MSNBC host added. "We understand that the parting was amicable. Still, we will miss Pat."

But MSNBC has not always been so forgiving of employees who publicly disagree with network content.

Foreign policy expert Rula Jebreal was fired last month after she criticized the network for a pro-Israel bias.

Watch the video below from MSNBC's Morning Joe, broadcast Aug. 4, 2014.