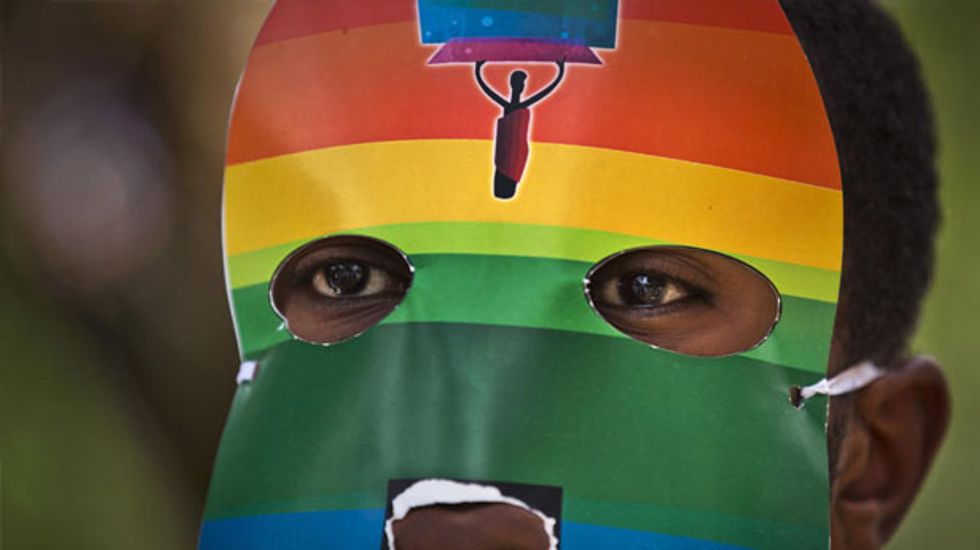 Kenyan gay wears a mask to preserve his anonymity (AFP)

Uganda's constitutional court on Friday overturned tough new anti-gay laws that had been branded draconian by rights groups, saying they had been wrongly passed by parliament.

The law is "null and void," the presiding judge told the court, saying the process had contravened the constitution, as it has been passed in parliament in December without the necessary quorum of lawmakers.

"Justice prevailed, we won," said lawyer Nicholas Opiyo, who led the challenge in the constitutional court.

The law's supporters said they would appeal the ruling at the Supreme Court.

"The retrogressive anti-homosexuality act of Uganda has been struck down by the constitutional court -- it's now dead as a door nail," said Andrew Mwenda, one of 10 petitioners.

The law, signed by Uganda's veteran President Yoweri Museveni in February, said that homosexuals should be jailed for life, outlawed the promotion of homosexuality and obliged Ugandans to denounce gays to the authorities.

US Secretary of State John Kerry likened the law to anti-Semitic legislation in Nazi Germany.

But homosexuality in Uganda remains illegal and punishable by jail sentences under previous legislation, which is expected to be returned after the court's decision.

Government spokesman Ofwono Opondo said the law -- as it is on paper -- remains valid, saying it had been struck down on a matter of procedure and not over its content.

"The ruling has not nullified the anti-homosexuality law, it only ruled on the validity of the procedure in parliament," he said.

But gay rights activists were celebrating.

"I am no longer criminal, today we have made history for generations to come," said Kasha Jacqueline, another petitioner and a prominent gay rights activist.

"I am officially legal," said Frank Mugisha, another petitioner, but admitting despite his "celebration mood" the ruling was only the "beginning of a very long battle."

"The law has been struck on technicalities, so the big picture is still there," he said.

Lawmakers could seek to reintroduce a bill back into parliament, a potentially lengthy process, with the last such bill taking four years from introduction to the final vote.

David Bahati, the MP who introduced the bill -- which initially proposed the death penalty as punishment -- said he still backed the law.

"It is a setback but not a major one, because the law is intact," he told AFP.

"The law is good for Uganda, no matter what court decides."

Outspoken anti-gay preacher Pastor Martin Ssempa led prayers before the hearing inside the tightly packed courtroom calling for the judges to uphold the law.

Ssempa had already warned he feared the "judicial abortion of our bill" due to international pressure.

"We are determined to appeal this case at the Supreme Court," he said.

Ssempa said the petition was being pushed to polish Uganda's international reputation before Museveni travels to Washington next week to meet President Barack Obama at a landmark US-Africa summit.

Critics have said Museveni signed the law to win domestic support ahead of a presidential election scheduled for 2016, which will be his 30th year in power.

But Western nations made a raft of aid cuts to Uganda's government in protest since the law was passed.

Washington froze some aid programmes, as well as cancelling military air exercises and barring entry to the US for specific Ugandan officials involved in "human rights abuses", including against the gay community.

Rights groups, who said the law triggered a sharp increase in arrests and assaults of members of the country's lesbian, gay, bisexual and transgender community, welcomed the decision.

"We are pleased that this law cannot be enforced and entrench further abuses and discrimination," said Maria Burnett from Human Rights Watch.

The 10 petitioners -- including two Ugandan rights organisations -- had also claimed that the law violated the constitutional right to privacy and dignity, as well as the right to be free from discrimination, and cruel, inhuman and degrading treatment.

But the judges stuck down the law based on only the first section, the issue of quorum, before any of those issues were discussed.