Klan heading to Ferguson to 'guard white businesses,' back shooting of 'n*gger criminal' 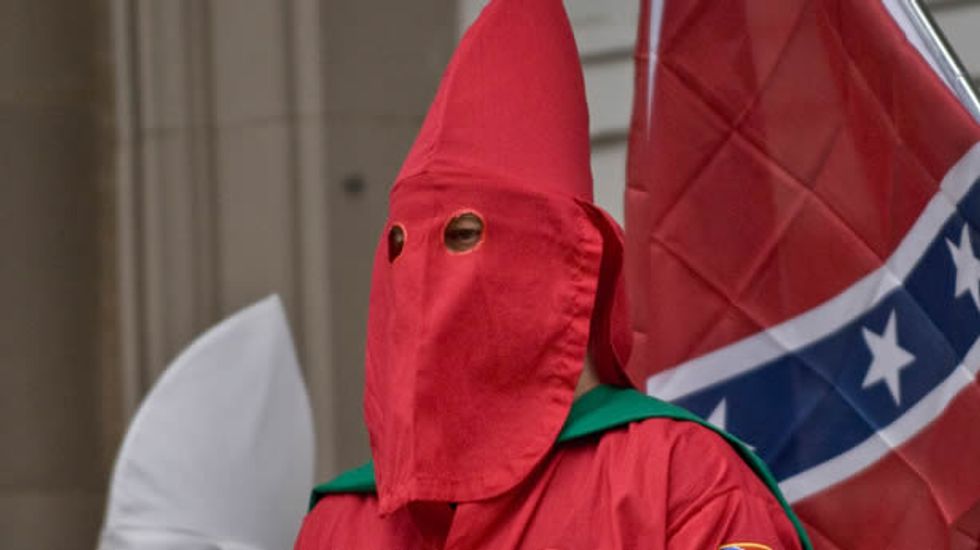 Ku Klux Klan (KKK) members from three different states are reportedly traveling to Ohio to hold a two-day fundraiser for the officer who shot unarmed teen Michael Brown, and to "guard white businesses."

The Southern Poverty Law Center (SPLC) first reported last week that that the New Empire Knights of the Ku Klux Klan had begun raising money in support of the Ferguson police officer who killed Brown.

On Friday, the New Empire Knights announced that it would be holding a fundraiser on August 23-24 in Sullivan, about 60 miles from Ferguson.

"With the police state in Ferguson, we will be holding our fundraiser in Sullivan City, MO," the announcement said. "Donations of $10 and up. All money will go to the cop who did his job against the negro criminal."

New Empire Knights Imperial Wizard Charles Murray said in the comments section of the group's website that the event was "being attended by 3 different Klan fractions."

And to anyone thinking of trying to get in the way, Murray warned, "we have guns (and more)."

"We are raising money for a cop who shot a n*gger criminal," he explained.

In a statement on Monday, Sullivan Mayor Thomas Leasor said that the city had seen reports about the KKK's plans.

"City elected officials nor City staff is aware of the specific location for the gathering or have any details regarding the event," the statement said. "On behalf of the City of Sullivan elected officials and City staff I want to emphasize that we have not, or will not, endorse or condone any activity based on hatred, more specifically any activity based on hatred towards any ethnicity."

Murray, whose group is based in Abbeville, SC, clarified to Sullivan Independent News that the event being held next weekend should not be considered a "rally."

”We are not holding a rally. We are having a fundraiser," Murray said. " Members of ours have been selling items online also. All funds are going to [the officer]."

On Monday, the New Empire Knights issued a statement about plans to "guard white businesses near Ferguson."

"With blacks out of control, we have our Missouri Realm going to areas near Ferguson," the statement said. "We can’t have blacks robbing and murdering innocent whites. I am on my way down along with members from three different states and members from the Southern Mountain Knights."