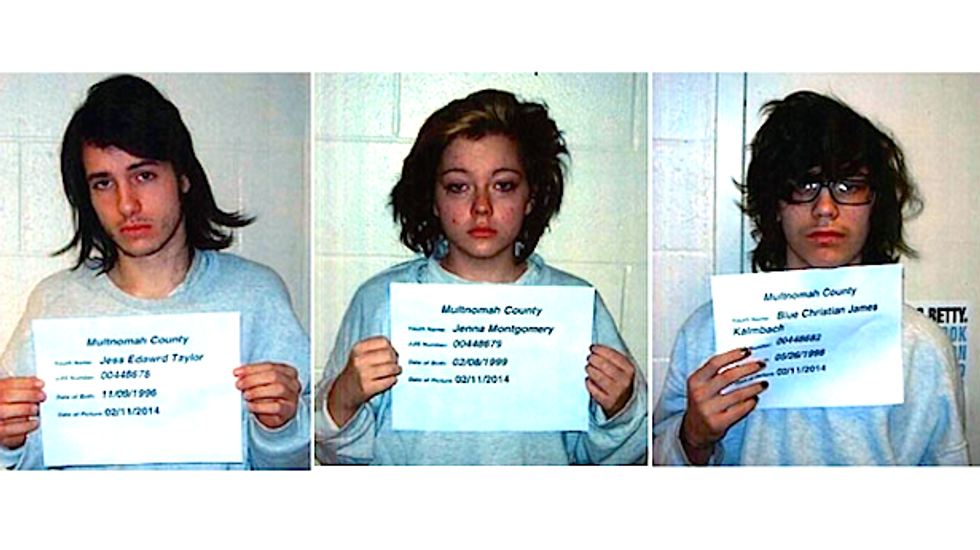 An Oregon teenager pleaded guilty and was sentenced to 11 years in prison on Thursday for taking part in an attack on a friend who was beaten, forced to eat cat feces and had a swastika carved into his forehead, prosecutors said.

Ramras said Kalmbach was responsible "for the most, sort of, hands on physical abuse," Ramras said, and thus received the longest sentence of the four. Kalmbach apologized in court before he was sentenced.

In February, the four teenagers were charged with luring 15-year-old Dustyn Murrian into a shed, hitting him with a crowbar, shooting him with a BB gun, forcing him to eat cat feces and carving the Nazi symbol into his forehead with a box cutter.

At the time of the crime, Murrian said his attackers told him they wanted money and a skateboard. They allowed him to leave the shed to get the items but he fled to a nearby auto shop, where employees called police.

Kalmbach, Jenna Montgomery, 15, and Jess Taylor, 17, were charged as adults with assault, kidnapping and robbery. Montgomery was sentenced to nearly nine years in a youth correctional facility and Taylor to about 7-1/2 years, Ramras said.

Shane Connell, 14, was tried as a juvenile and earlier sentenced to 10 years.