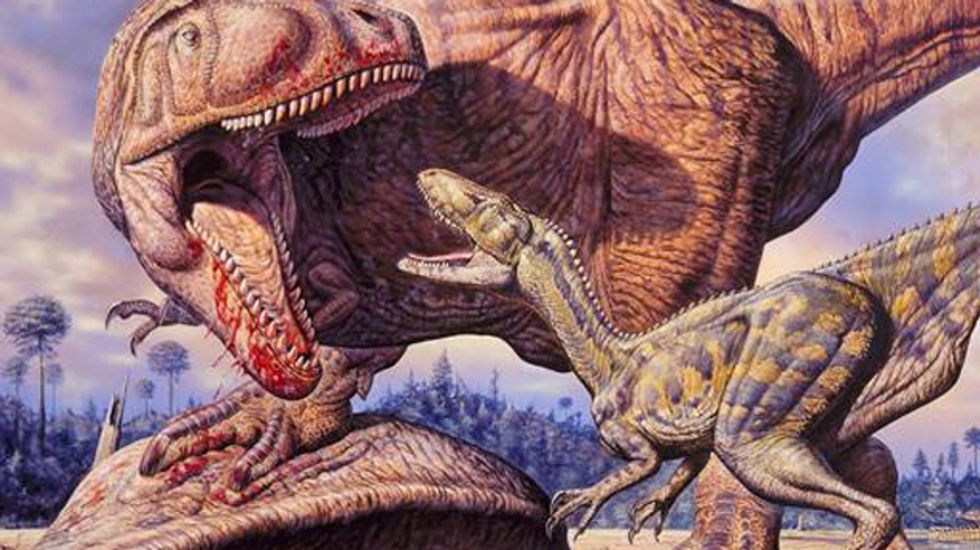 The branch of theropod dinosaurs which gave rise to modern birds decreased inexorably in size from 163kg beasts that roamed the land, to birds weighing less than 1kg over the period.

The radical transformation began around 200m years ago and was likely driven by a move to the trees where creatures with smaller, lighter bodies and other features, such as large eyes for 3D vision, fared better than others.

Scientists pieced together the dinosaurs' sustained shrinkage after analysing more than 1,500 anatomical features of 120 species of theropods and early birds.

The evolutionary tree reveals that the theropod ancestors of modern birds underwent 12 substantial decreases in size that led to archaeopteryx, the earliest known bird on Earth. The rate at which they evolved distinct features, such as feathers, wings and wishbones, was four times faster than adaptations in other dinosaurs.

"Birds evolved through a unique phase of sustained miniaturisation in dinosaurs," said Michael Lee at the University of Adelaide. "Being smaller and lighter in the land of giants, with rapidly evolving anatomical adaptations, provided these bird ancestors with new ecological opportunities, such as the ability to climb trees, glide and fly. Ultimately, this evolutionary flexibility helped birds survive the deadly meteorite impact which killed off all their dinosaurian cousins," he added. The study is published in the journal, Science.

Gareth Dyke, a vertebrate palaeontologist and co-author of the study at Southampton University said: "The dinosaurs most closely related to birds are all small, and many of them, such as the aptly named Microraptor, had some ability to climb and glide."

In an accompanying article, Michael Benton at Bristol University, said that the long-term trend that led to modern birds was probably shaped by the animals taking up in new habitats. "The crucial driver may have been a move to the trees, perhaps to escape from predation or to exploit new food resources," he writes.

A smaller body size would have benefited animals living in the trees, while enlarged eyes would improve their 3D vision to avoid collisions with branches. Insulating feathers could have helped them hunt at night, and elongated forelimbs gave them increasingly more impressive wings to enable more daring leaps from tree to tree, Benton writes.