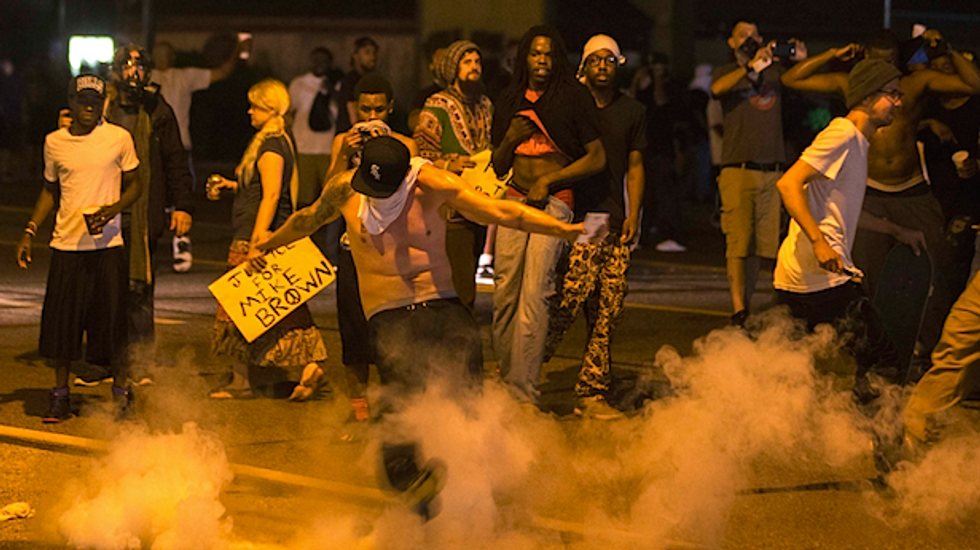 Missouri's governor said on Monday he would send the National Guard into the St. Louis suburb of Ferguson to restore calm after authorities forcibly dispersed a crowd protesting last week's fatal shooting of an unarmed black teen by police.

Gov. Jay Nixon signed an executive order deploying the U.S. state militia, saying demonstrators had thrown Molotov cocktails and shot at police as well as a civilian, a description of the night's events diverging widely from some eyewitness accounts.

“Tonight, a day of hope, prayers, and peaceful protests was marred by the violent criminal acts of an organized and growing number of individuals, many from outside the community and state, whose actions are putting the residents and businesses of Ferguson at risk," Nixon said in a statement on his website.

A midnight curfew was imposed for the second night in the tense St. Louis suburb hit by racially charged demonstrations, violence and looting since Michael Brown, 18, was shot to death on Aug. 9 by white police officer Darren Wilson.

At around dusk on Sunday, hundreds of protesters in Ferguson including families with young children fled to safety after police wearing gas masks and body armor fired tear gas and smoke canisters to scatter them hours ahead of the curfew.

"The smoke bombs were completely unprovoked," said Anthony Ellis, 45. "It (the protest) was led by kids on bikes. Next you know they're saying, 'Go home, Go home!'"

The Missouri Highway Patrol said "aggressors" were trying to infiltrate a law enforcement command post and that armored vehicles were deployed to ensure public safety.

State Highway Patrol Captain Ron Johnson told a late night news briefing: "Molotov cocktails were thrown, there were shootings, looting, vandalism and other acts of violence that clearly appear not to have been spontaneous."

He was explaining the police tactics against what he said had to that point been a peaceful demonstration.

"Coordinated acts" by a few in the crowd were "premeditated criminal acts designed ... to provoke a response," Johnson said. "I had no alternative but to elevate the level of our response."

He noted most of the protesters were peaceful and blamed the trouble on "a few people bent on violence and destruction."

Johnson said the trouble began after police responded to the shooting of a civilian at 8.25 p.m., which was followed by gunfire directed towards police and Molotov cocktails being thrown. At least one other person was shot, and several were arrested. No police were injured.

Officials said Ferguson schools would be closed on Monday.

A preliminary private autopsy, asked for by Brown's family, showed the teenager was shot at least six times, the New York Times reported on Sunday night.

Quoting Michael M. Baden, former chief medical examiner for the City of New York, the newspaper reported that Brown was shot twice in the head, and that the bullets that hit him did not appear to have been fired from very close range because no gunpowder was detected on his body.

Brown's family was set to appear with Baden on Monday morning in St. Louis to address the autopsy's findings.

Earlier on Sunday, U.S. Attorney General Eric Holder ordered a federal autopsy of Brown's body, seeking to assure the family and community there will be a thorough investigation.

Police say Brown was asked by Wilson to move off the road and onto a sidewalk and that Brown reached into a patrol car and struggled with Wilson for his service gun and was shot.

A friend of Brown's, Dorian Johnson, 22, and at least one other witness said Wilson reached out through his car window to grab at Brown and the teenager was trying to get away when shot. Brown held up his hands in a sign of surrender but Wilson got out of his patrol car and shot Brown several times, they said.

Police in Ferguson have come under strong criticism for Brown's death and their handling of the aftermath.

On Saturday night they also used smoke canisters and tear gas to drive away protesters who refused to leave the area when the midnight-to-5 a.m. curfew began. Seven protesters were arrested after failing to disperse.

As disturbances continued in Missouri, 500 people protested outside police headquarters in Los Angeles on Sunday over the shooting death of an unarmed black man in California a week ago.

That rally was peaceful, with many holding up signs reading, "Hands up, don't shoot," in reference to witness reports that Brown had his hands up when he was shot in Ferguson.