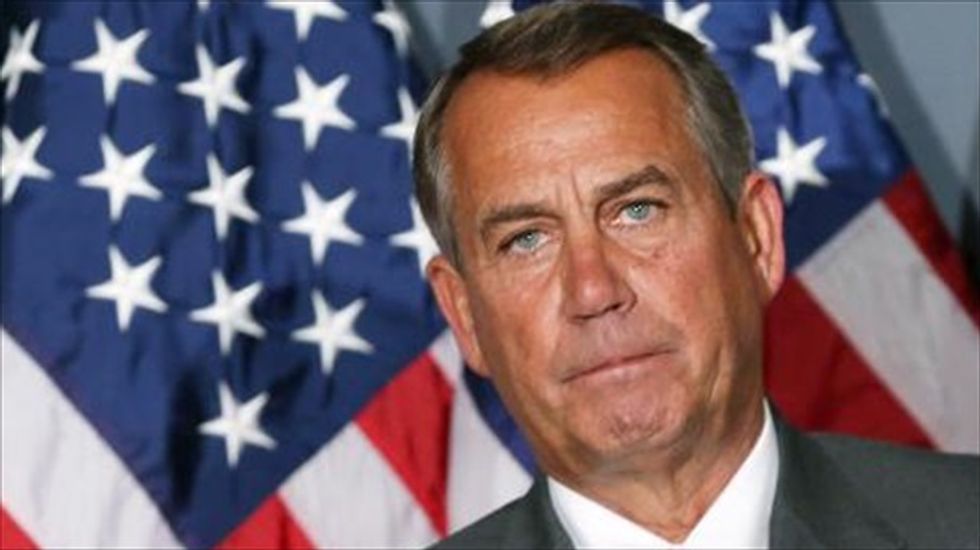 Glenn Grothman is a fiery conservative who wants to slash welfare programs and crack down on illegal immigrants who he says will "destroy" America.

And if U.S. House Speaker John Boehner wants to keep his job next year, he had better be sure Grothman and his fellow House of Representatives newcomers are happy.

Grothman, the expected winner in a tight Republican primary for the right to succeed 73-year-old Rep. Thomas Petri in Wisconsin, is one of more than a dozen vocal conservatives gunning to replace more moderate or pragmatic retiring House Republicans in November's midterm elections.

Their arrival could mean even more headaches for Boehner, who has struggled in recent years to keep his fractious caucus together on critical battles over tax and spending bills, and most recently on legislation to secure border funding.

A further shift to the right in the House, continuing a trend that began with the Tea Party's surge in 2010, could signal another round of high-stakes political showdowns early in the new year and ultimately threaten Boehner's leadership.

One of the first votes the new House conservatives will face in March will be on raising the federal debt limit -- a topic that already has produced two grinding partisan battles that rattled financial markets and threatened U.S. credit ratings.

"It's going to be very difficult, if not impossible, for the next speaker to get to 218 without Democratic votes," said James Thurber, a political scientist at American University, referring to the majority needed to pass legislation in the House.

But turning to Democrats more often to pass critical budget, transportation or immigration bills next year is a path toward potential mutiny by conservatives, Thurber said.

"There's just nobody in the middle anymore and nobody that's willing to cross parties to vote because of this polarization," Thurber said.

Boehner could face a challenge to his speaker position when House members choose their leadership after the November elections. Boehner said this summer that he was "all in" to seek another term as speaker, apparently quashing speculation that he has grown weary of the job.

It's been a rocky four years since Boehner took up his gavel in 2011. To remain speaker, Boehner has had to give in to caucus demands and find ways to pass more conservative legislation, even if it had little chance of passing the Democratic-controlled Senate.

After passing a tax increase on the wealthy and $50.7 billion in aid for Superstorm Sandy largely with Democratic votes last year, he won back support by agreeing to the Tea Party's effort to withhold funding from Obama's healthcare law.

The move led to a 16-day federal government shutdown -- but Boehner won points for listening to the conservative sentiment of his caucus.

Grothman's narrow primary victory, which is expected to be confirmed this week, puts him on a path to take over for Petri in the heavily Republican eastern Wisconsin district he has represented since 1979.

Some district conservatives expressed frustration with Petri's willingness to compromise with Democrats. He chairs a House subcommittee on highway construction, normally one of the few areas of bipartisan cooperation in Congress, and recently advocated higher fuel taxes to replenish the Highway Trust Fund -- a move that most Republicans have ruled out.

"We've got to take the country back," said Gene Weyer, a retired corporate executive from Manitowoc, Wisconsin. "The country is going wrong in so many different ways. We need people like Glenn to get us back between the bumpers of the bowling alley, and stay out of the gutters."

The election of the conservative Grothman would mirror recent trends in Congress, where the middle ground has been shrinking for decades. Voting patterns analyzed by academics and posted on Voteview.com show the number of moderates in the House -- those who have crossed party lines in their voting - has shrunk from nearly half of House members in the 1970s to less than 10 percent in 2013.

That shift has been aided by the drawing of legislative boundaries that make Republican districts more "safe" by concentrating conservative voters and shifting more liberal areas to neighboring Democratic districts.

And it has accelerated in recent years with the rise of the conservative Tea Party, which has made opposition to President Barack Obama and support for its agenda of smaller government, reduced federal spending and lower taxes a litmus test for Republican lawmakers.

While the Republican establishment has turned back several Tea Party challengers in Senate primaries this year, the movement has had more success in House contests. Its highest-profile victory was by political newcomer Dave Brat, an economics professor who toppled Boehner's No. 2, Eric Cantor, in Virginia.

Other Tea Party candidates who appear headed to Washington include Baptist preacher Mark Walker, who won a Republican primary in North Carolina to replace retiring Howard Coble, and Gary Palmer, a conservative think-tank activist backed by the influential anti-tax group Club for Growth. He is likely to replace Spencer Bachus of Alabama.

All were influential supporters of Boehner. But the Tea Party candidates headed to Washington in their place often put a higher priority on spending cuts and debt reduction than on party loyalty.

"Republican voters want to vote for conservative candidates who want to stand up to Republican leadership. And that's me," said Grothman, a Wisconsin state senator who introduced a bill that would officially list single parenthood as a contributing factor to child abuse and once derided Kwanzaa as a "supposed" holiday that African-Americans don't care about.

The seasoned lawmaker with 20 years in Madison has been instrumental in implementing Wisconsin Governor Scott Walker's conservative agenda, including the roll-back of collective bargaining for public workers, along with state tax cuts for manufacturers and farmers.

In Washington, he said his focus would be cutting and reforming welfare programs that he says are helping to break down the traditional family structure by creating financial penalties for marriage. He added that welfare programs are also attracting illegal immigrants, who should be immediately sent back to their home countries -- including the thousands of detained Central American children.

"Immigration is a huge problem," he said. "It's going to destroy the country," he said. "We are attracting people here to use the benefits, which will both break the country and change its culture."