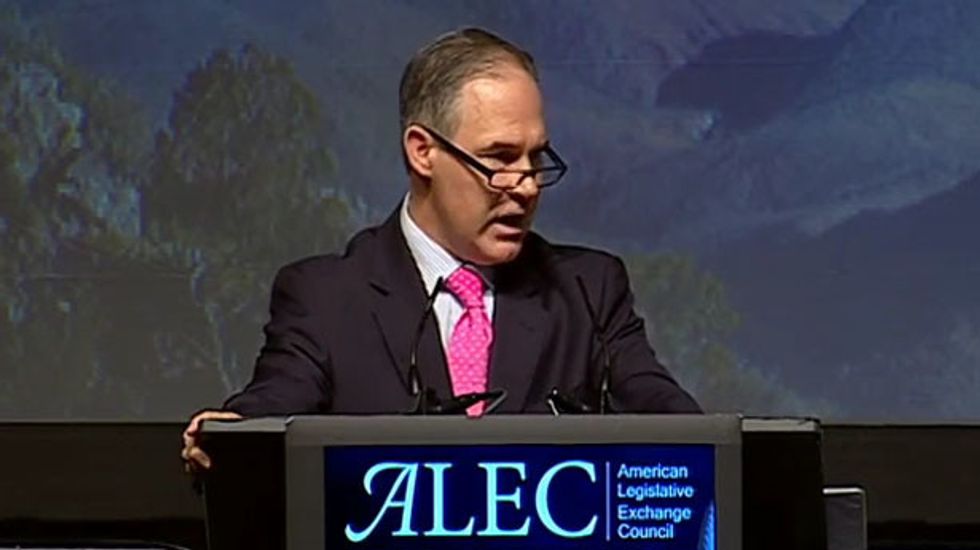 In a speech to the American Legislative Exchange Council last week, Oklahoma Attorney General Scott Pruitt said he was worried about the EPA because of a report he saw on the MSNBC show All In with Chris Hayes.

"I don't watch MSNBC too much, but I watch Chris Hayes, apparently. And so, on this show, he had the president giving an interview, I think it was to Mr. Krugman, about energy policy in this country, and I was shocked by what was reported. The administration and this show talked about that the goal of our energy policy should be to keep two-thirds of the fossil fuels in the ground. That's the goal," Pruitt said.

"And so when you have that stated as clearly as that, you start asking the question, this body called the EPA, this agency called the EPA, what is their role, what is their objective? Is it to pick winners and losers in the energy context? Is it to say that renewables are good and fossil fuels are bad, so we are going to use our regulatory power to penalize fossil fuels, to elevate other types of energy?"

In July, Hayes highlighted an interview between columnist Thomas Friedman and Obama, in which the president remarked that "we're not going to be able to burn" all of the fossil fuels in the ground if the United States wants to limit global temperature rise.

"President Obama was asked about the international goal of limiting global temperature rise to 2 degrees Celsius. Now, the international energy agency has concluded that meeting that target will require leaving two-thirds of the Earth's known reserves of oil, gas, and coal underground, unburned," Hayes explained.

"'We are not going to be able to burn it all. We cannot burn it all.' No one ever says that, at least no U.S. president, until now."