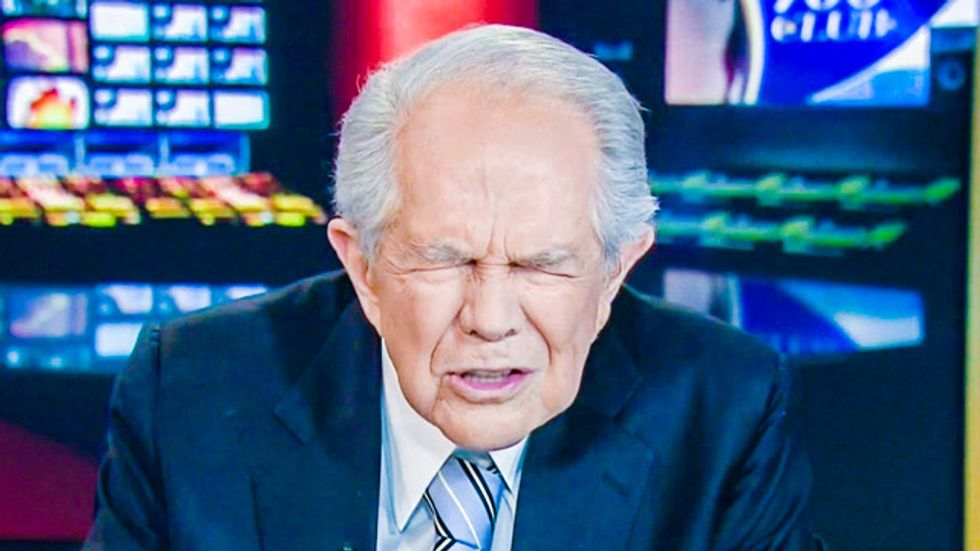 Televangelist Pat Robertson on Monday invited retired General Paul Vallely to discuss why President Barack Obama and his entire national security staff needed to be removed from the U.S. government.

According to Vallely, the United States would suffer "cataclysmic events" if the president continued to refuse to go to war against the militant group ISIS in Iraq.

"I would tell the four star [general], the head of Central Command, two words: Destroy ISIS," Vallely recommended. "If I was there, I would give [the order], but under President Obama, he is such an amateur, he basically lives in the Twilight Zone, his staff does, his national security team does."

"We've got to get a better national security team in there," he continued. "Because they're taking us on national suicide, and you can see the suicide that's going on in the Middle East, by the county not participating and assisting to destroy ISIS."

Vallely argued that the entire national security team needed to be replaced, but "unfortunately in our Constitution, we can only do impeachment."

"We are generating what we call a no confidence resolution in Congress this week that hopefully will lead to impeachment," the retired general revealed. "Because we cannot let this regime in Washington to continue to take us over the cliff. We just can't do it."

Robertson said that he had a "sense" in his heart that President Barack Obama's "inaction is going to destroy us."

"There will be cataclysmic events within the year, I can tell you that," Vallely agreed. "We need very strong leaders in Washington today to be able to turn this country around. And I call it national suicide, I call it America at a crossroads."

Immediately following the general's interview, Robertson asked his audience to pray because "chaos and terror" were coming "to every person living in the United States of America."

"We see a feckless administration unwilling to act except in feckless terms," the TV preacher prayed. "God, we need the angels! We need your help! We need the strength of God Almighty! We need your power, Lord!"

"Intervene, Lord!" he begged. "Send the angels! Do miracles!"