Sorry, Richard Dawkins, but you did not actually hurt my feelings 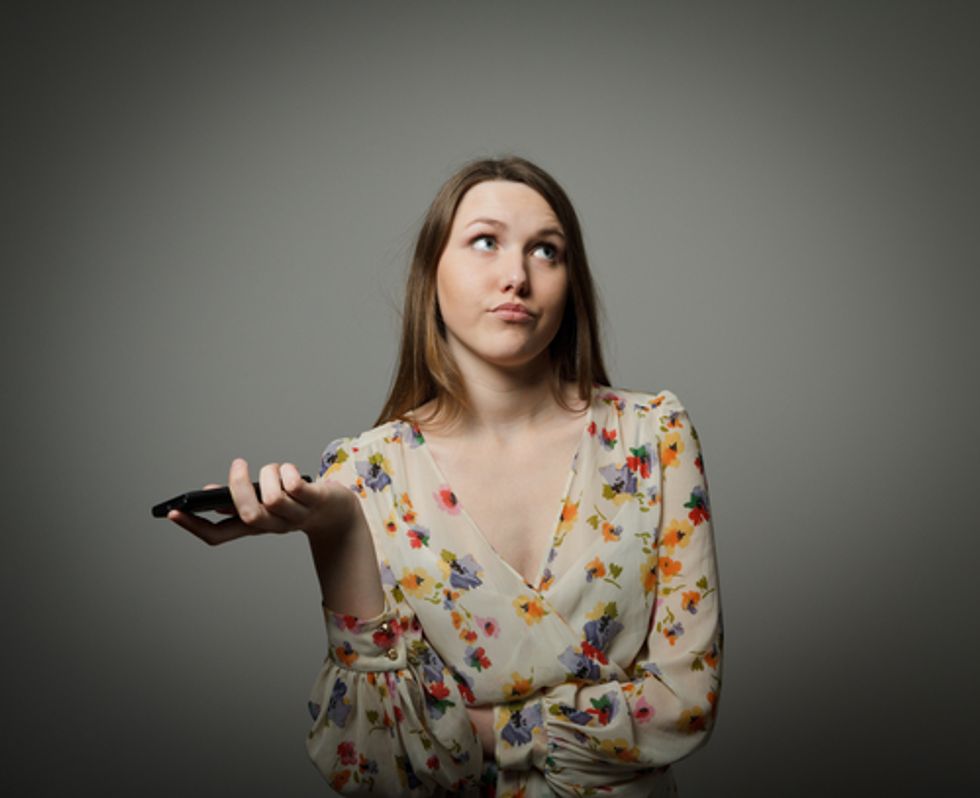 I try not to just keep hammering at stuff like Richard Dawkins trolling feminists, especially since I've said my piece and Dawkins continues to be too addicted to accolades from misogynist creeps on the internet to bother addressing anyone's actual criticisms of him, but fuck it, sometimes you have to get back into the melee. Dawkins is being particularly disappointing this round because he's hiding behind a gambit so transparent that every shitty 18-year-old boy who wants to win an argument with his girlfriend resorts to it: Telling you that you're too emotional to be reasonable and he alone possesses access to objective reality above emotion. That this tactic is highly gendered should not be treated as a coincidence. Claiming to simply be more reasonable and declaring victory is possibly the most common way men on the losing side of an argument with women try to regain the upper hand.

To be clear, Dawkins is definitely too smart to openly invoke the idea that women are irrational and overly emotional while men need to offer us calm, rational reasons our feelings are wrong. That doesn't change the fact that it's a nasty stereotype that serves more to get "hell yeahs" from men who really want to believe women are inferior than to actually forward the conversation. But instead of continuing to gab, I'll share some of the piss-poor arguments he's offering. From his half-assed defense of himself on his blog:

There are those whose love of reason allows them to enter such disagreeable hypothetical worlds and see where the discussion might lead. And there are those whose emotions prevent them from going anywhere near the conversation. Some of these will vilify and hurl vicious insults at anybody who is prepared to discuss such matters. Some will pursue active witch-hunts against moral philosophers for daring to consider obnoxious hypothetical thought experiments.

He uses a lot of words to make this seem smarter than it is, but the basic idea is contained in here, which is that his critics are too "emotional" to understand reason. Then there's this: 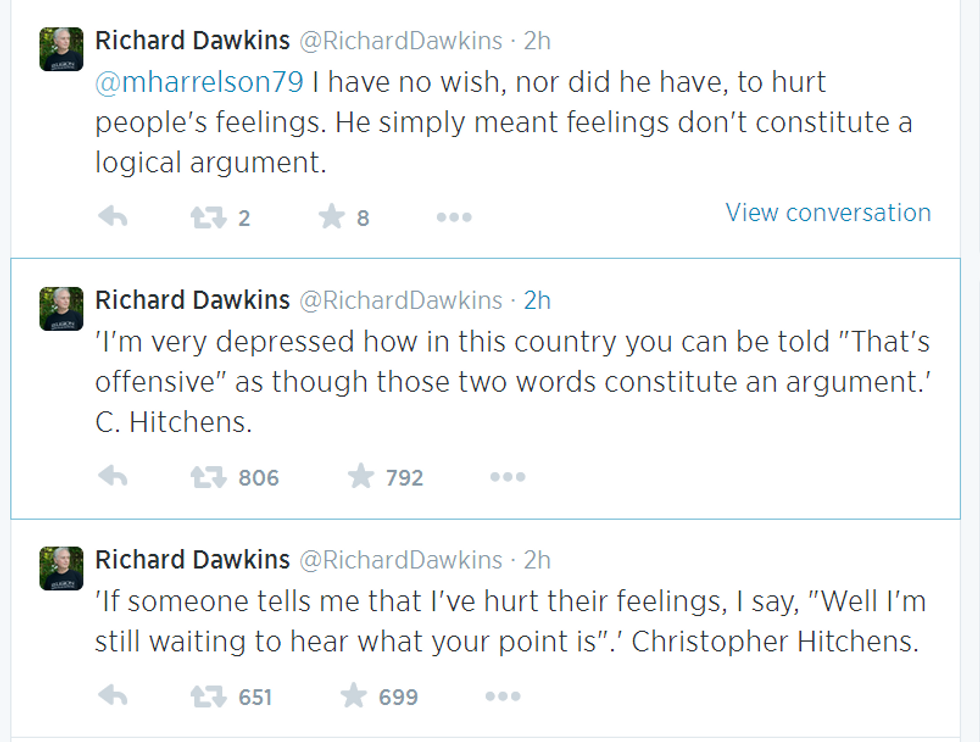 Same idea, trying to argue that his critics are just being emotional fussy pants who haven't actually considered his arguments because they're wallowing in tears and probably menstrual blood.

This is a tough one for me, because I'm of two minds on this. The first and more straightforward is that this is dirty pool, shaming people for having emotions. It's also an utterly irrational argument, because it indulges a false claim that emotions are somehow in opposition to reason. Since we are feeling emotions all the time, then this "ideal" of being a being of pure rationality has never actually been tested and so is a pure hypothetical. (And there's research that shows that people who have mental health issues that screw with their ability to know what they feel and want are actually less capable of basic reasoning, not more, because they have trouble figuring out what goals reason should serve.) Indeed, Dawkins is speaking from a very emotional place right now, clearly from hurt pride and indignation, because again, you are always feeling emotions.

So this is an obvious attempt to stifle discourse by shaming people that Dawkins decides have too many emotions, which is synonymous with disagreeing with him, and that you can tell someone has the "correct" amount of emotions because they agree with him, which is actually kind of funny if you saw any of the rage-filled bile that was aimed at me from the pro-misogyny troops for daring to criticize him at all. Stephanie Zvan dealt with this:

I’m disgusted. How is it that a scientist is still entertaining this idea that people being emotional is a bad thing or that it is somehow universally detrimental to thinking when we have studies that show emotion is critical for good decision-making? How is it that people who purport to be good at thinking still promote arguments that rely on this outdated idea?

She also points out that despite the purported willingness to "examine" any question, no matter how taboo, actual taboos aren't being violated, such as asking whether or not we should just renounce capitalism and embrace censorship. Not that she's saying we should do either, but when you're Just Asking Questions, the ones you ask tell us a whole lot. It's worth noting, as I did in my original post on this issue, that distinguishing between degrees of criminal assault is not actually a controversial stance at all. It's controversial to say there's one objective rule of thumb that can be applied in all situations, but only because that's the dumbest thing you could possibly say. That's why we have courts to weigh evidence and sort through the various details of a crime to determine the penalty instead of just rubber stamping this situation, because shit is complicated. Except for a few screamers who don't make any sense at all, I don't think anyone disputes that there should be varying criminal penalties depending on the circumstances of a crime---which is true for every kind of crime, and not just sexual assault. But I repeat myself. That claim that there's a single standard becomes even dumber if you're trying to adjudicate how people feel about being assaulted. If one woman feels worse about being raped by her boyfriend than another woman feels about being raped by a stranger, then that's simply and objectively a fact of the world, not really up for debate. Sitting in judgment of how much hurt someone "gets" to feel is a sadistic exercise and pointless to boot. Dawkins has not addressed either of these arguments, instead squealing about emotions and how you're not supposed to have them.

But the other part of me is more base: Just to cry foul when Dawkins writes, "I have no wish, nor did he have, to hurt people’s feelings. He simply meant feelings don’t constitute a logical argument." Because, and I hate to break this to you, Richard Dawkins, but you didn't hurt my feelings.

Which isn't to say that you're a bad person or wrong if he did hurt your feelings. Indeed, that probably shows that you're an emotionally healthy and well-calibrated person who understands the seriousness of this issue on a deep, emotional level. But I'll be frank: After years of being called an ugly fat slut cunt bitch libtard on a daily basis, my ability to get my feelings hurt by someone spouting off half-baked sexist blather on the internet has been thoroughly blunted. Your words are wind to me, Mr. Dawkins. Not that I had no emotions when I read your silly spouting off about sexual violence---we've established that, barring serious brain damage, we are all feeling emotions all the time---but the word "hurt" never came close to how I felt. Irritation, sure. Annoyance at someone making a bad faith argument, especially someone who really should know better. But hurt? Your tedious opinions don't hurt my feelings. To assume that they did is to inject a pernicious sexist stereotype about the tender hearts of women, one that doesn't hold up under careful examination. I get hurt by a lot of things---cutting remarks from loved ones, dead animals on the street, having my cat ignore my requests for cuddles---but watching someone pompously troll feminists and then get all bent out of shape when they call him out on it causes mostly a gentle swaying between being irritated at your bad faith and being amused at the unintentional comedy of this situation. I may be a sick person, but these things are still true.

Oh yes, I know that the sexist fuckwits of the internet will tell me that my feelings were too hurt. This is an obvious gas lighting technique, to tell a woman that you know better than she does how she feels, even though she is actually the person in her brain experiencing the feeling. As with the claim that the sexists speak from rationality and the feminists from "emotion", it's simply an attempt to piggyback on sexist stereotypes in order to gain ground. It is not an argument. And being a man does not make someone more of an authority on how I feel than the signals coming from my own brain.

I get that Dawkins was not speaking just about me, but about his multitude of critics, some of whom probably did have hurt feelings (and, again, that says nothing about how wrong or right they are, any more than my lack of hurt feelings says anything about my arguments). But still, I am irritated by this dismissal, as it necessarily includes me and other people like me who aren't crying about this but are more just annoyed. How dare you tell us what we feel? How would you even know?

I realize a lot of dudely atheists struggle to understand any experiences outside of the narrow ones that they feel, so I will liken this to an experience you probably have had. You know how it is when believers go on about how you must "hate" God and are in rebellion and you're like, "No, asshole, I don't hate God. I simply don't believe in him." And you know how they smugly tell you how you really feel about the issue and that deep in your heart you must be afraid of God and longing for him and blah blah blah. You know how irritating that is?

That's how I feel right now: Not weepy and hurt, but annoyed. It is due to the fact that Dawkins argued in bad faith and, when called out on it, refused to address the actual, legitimate arguments detailing out the problems with his little syllogism. That shit is annoying. Not hurtful. If you hurt my feelings, I'll let you know. But right now I'm annoyed, a feeling that Dawkins surely appreciates as being publicly annoyed is a big part of his brand. Annoyance is more itchy than hurtful. If you can't even get that straight, I don't know how this taboo-busting conversation is supposed to go forward.