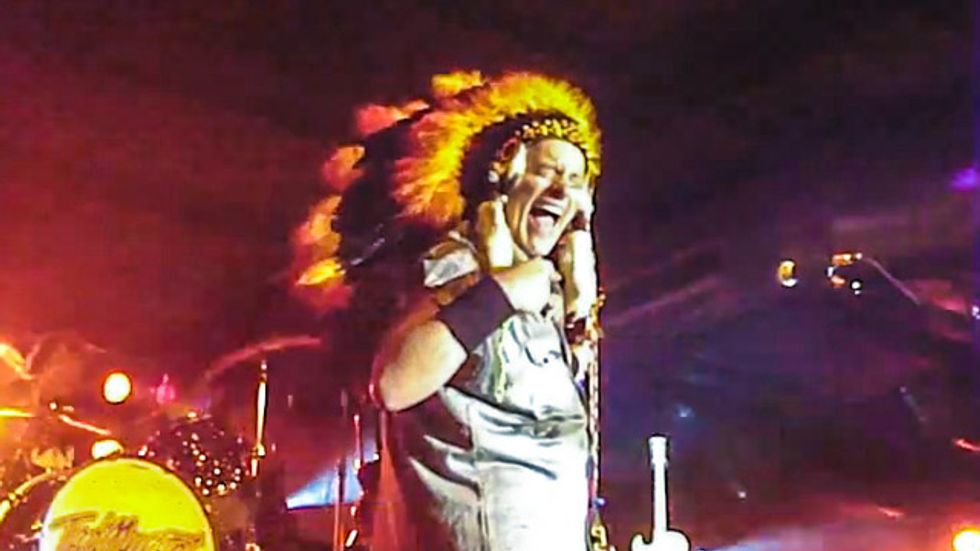 Conservative rocker Ted Nugent on Thursday lashed out at Native Americans who protested one of his South Dakota concerts, calling them "stinkyass unclean dipsh*t protestors."

Earlier this summer, Nugent had been scheduled to appear at a casino in Worley, Idaho, but the tribe canceled after learning about his history of racially inflammatory statements.

“I take it as a badge of honor that such unclean vermin are upset by me and my positive energy,” the rocker said late last month. "By all indicators, I don’t think they actually qualify as people, but there has always been a lunatic fringe of hateful, rotten, dishonest people that hate happy, successful people."

Since then, at least three more concerts have been canceled due to pressure from Native American groups and other progressives. And on Thursday, Nugent took to his Facebook page to complain about Native American protesters from the United Urban Warrior Society in Rapid City who showed up at his Wednesday event in Sturgis.

"WE ARE ON OUR JET NOW HEADING FOR TOLEDO RIBFEST JAM AFTER AN INSANE INCREDIBLE OUT OF BODY ULTRAROCKOUT at the Full Throttle Saloon in Sturgis SD!" Nugent wrote, according to Media Matters. "Simply astonishing gig! 4 stinkyass unclean dipshit protestors that admitted they hate me AND ALL WHITE PEOPLE THAT STOLE THEIR LAND BULLSHIT!!"

"See, it aint me they hate, they hate all Americans that produce & live the American Dream. Simply insane!"

A Facebook page has been set up to organize a protest at Nugent's Friday concert, which is sponsored by The Toledo Blade newspaper.

"Sure, Nugent has a right to free expression under the First Amendment. But no matter what your political views, every citizen also has a right and in a democracy, a civic responsibility to protest bigotry and intolerance," organizers noted. "That’s why we are urging everyone to add their voice, speak out, and join in protest of the appearance of this man and his vile stream of hate speech in our community!"