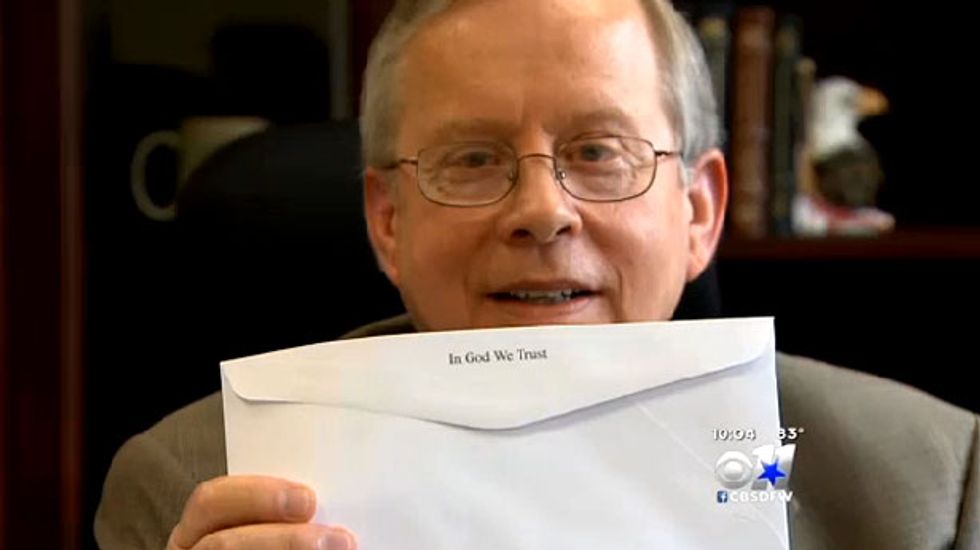 A county official in Texas has decided to add the phrase "In God We Trust" on the back of tax office envelopes.

Tarrant County Tax Assessor-Collector Ron Wright told CBS 11 News that he had been considering adding the national motto to the envelopes for over a year.

"I think it was more seeing the elimination of the phrase and how things that have been iconic to us and have been important to us historically because of lawsuits and things like that," Wright explained. "People are almost afraid to mention God anywhere officially."

Wright said he also plans to print the motto on official tax statements next year. He described the phrase as both patriotic and religious.

The county official claimed he had received few complaints about his new policy. It cost only three dollars to buy a new printing plate.

One resident has described the motto as a violation of the separation of church and state.

"Those are my tax dollars, and I don’t want them funding a religious opinion," Leslie Weid Fraser wrote to the Star-Telegram.

"The doctrine of separation is there to keep government from promoting or advancing any religion over another. Religion is personal and should not be included on any envelope used by a government office."

Like everyone else in the House Republican conference, New York Congresswoman Elise Stefanik has done her share of inciting white political violence. While the House debated recently additional aid for Ukraine, the No. 3 Republican chose during her allotted time to rail against the president for “the invasion at the southern border.”

That “invasion” plays a small role in the larger story of “the great replacement” feared by right-wingers to such a degree that one of them, Payton Gendron, took matters into his own hands last week and shot to pieces 10 Black people at a supermarket on Buffalo’s eastside.

Deficit reduction sounds like one of those nonpartisan measures of governing competence. That’s why Joe Biden has been touting it.

In fact, it’s largely irrelevant to voters – for good reason.