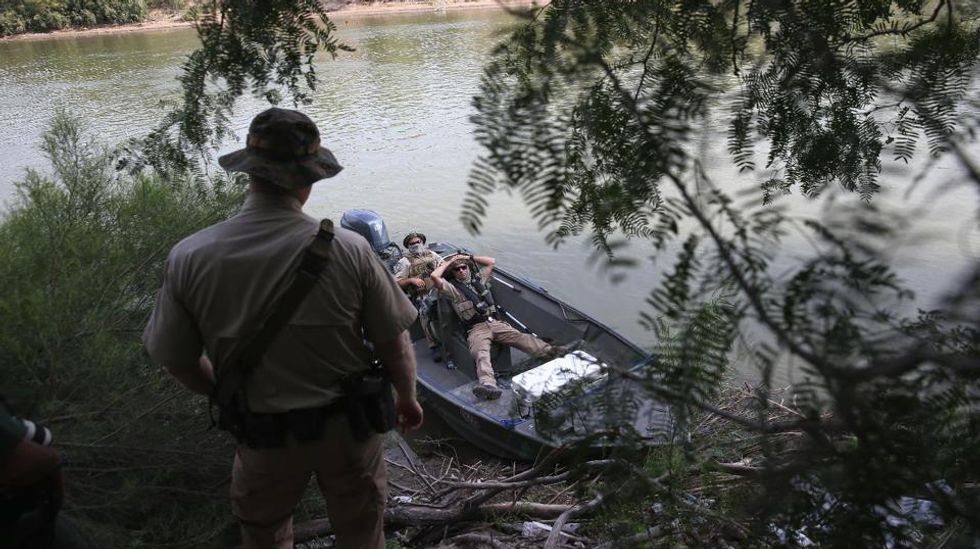 Murder, corruption and all sorts of sleazy behavior are found on both sides of the US-Mexico border in the US TV drama "The Bridge," which focuses on an American and a Mexican detective trying to solve bi-national crimes.

The series, which just began its second season in the United States, Latin America and Spain, opened in July 2013 with the gruesome discovery of a woman's mutilated body placed in the middle of one of the busy bridges over the Rio Grande that links El Paso, Texas and Ciudad Juarez, Mexico.

The teeming urban sprawl of about 2 million people -- some 1.4 million in Ciudad Juarez and about 600,000 in El Paso -- is one city with deep historical, cultural and family ties divided by an international border.

In the show, Ciudad Juarez police detective Marco Ruiz, played by leading Mexican actor Demian Bichir and his Texas counterpart Sonya Cross, played by German actress Diane Kruger, work together to attempt to solve baffling serial killings that have suspects and leads on both sides of the border.

As the investigation unfolds, issues of drug trafficking, human smuggling, bribery and abuse of power in the United States and Mexico, inspired by real-life cases ripped from the headlines, are dealt with in the show.

"Here we talk of all the problems that two countries so different as the United States and Mexico share, but in a fictional setting," Bichir told AFP in an interview.

The series "does not treat one country as good and the other as bad. That's one of the things that keeps the viewer's attention," said Bichir, nominated for an Oscar for his lead role in the 2011 Chris Weitz movie "A Better Life."

"The Bridge" is a remake of the 2011 Swedish-Danish TV series "Bron/Broen" adapted to the busy 2,000-mile (3,200-kilometer) US-Mexico border, legally crossed by one million people a day.

The show includes episodes that touch on the turf wars between Mexican drug cartels to control lucrative smuggling routes into the United States -- the world's largest illicit drug market -- and the influence of the cartels on the northern side of the border.

It also addresses the illegal immigration of Mexicans and Central Americans, many of whom are robbed, abused, raped and sometimes murdered by criminal gangs before they even attempt to sneak into the United States.

In this context of rampant, out-of-control violence, Detective Ruiz faces endless obstacles, not only having to deal with the shocking cruelty of some of the crimes, but also the corruption of his own police colleagues.

In El Paso Detective Cross, who has Asperger syndrome and can be brusque and tactless, struggles to enforce US law even while she has a jaded, often uninterested supervisor.

The series "puts the finger on the sore" of the most controversial issues affecting both countries thanks to the honesty of the two lead characters, Bichir said.

"The Bridge" has found the right formula to bring Americans closer to what is happening in its southern border, "touching fundamental issues to open eyes and allowing viewers to reflect through emotions," said Demian's brother Bruno Bichir, who in the series portrays a dark character named Sebastian Cerisola.

"The most important thing is to realize, through this fiction, that Mexico and the United States are in a marriage and that we have a border that we must care for together," he said.

Americans appear to be increasingly concerned about the southern border, especially with violence linked to the drug trade and the flood of illegal migration.

The show's first season had some 3.3 million viewers in the United States, and some 14,000 followers on Twitter. The series airs on the FX network, part of the Fox Entertainment Group, and there has been no confirmation yet of a third season.

Demian Bichir hopes that "The Bridge" will take a closer look at the issue of migration to the United States.

"We have to talk about the origin of this massive exodus of children that has arrived at the border," he said, in reference to the more than 57,000 minors, mostly from Central America, who have illegally crossed into the United States since October.

"It would be worthwhile if 'The Bridge' has the time to tell the history of this humanitarian crisis, and that it takes the time to put a face on the 12 million undocumented people living their daily lives in the United States," he said.