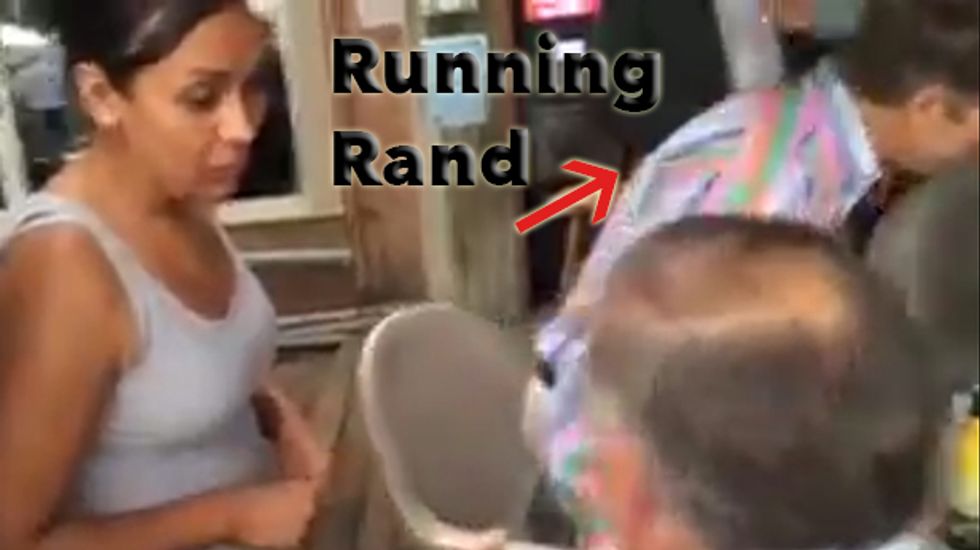 The video, which was shot during a fundraiser in Okoboji, Iowa, shows Paul biting into a hamburger as coalition co-director Erika Andiola introduces herself to King. As soon as she tells King, "I'm actually a DREAMer, myself" -- referring to young undocumented immigrants covered by the Deferred Action for Childhood Arrivals (DACA) program -- Paul puts the burger down and appears to be chewing more rapidly as a staff member leads him away from the conversation.

Andiola, who was brought to the U.S. from Mexico when she was 11 years old, criticized Paul on Twitter for his refusal to participate in the discussion.

Oh, and did I mention @SenRandPaul ran away from the table when I started talking to @SteveKingIA and mentioned I was a Dremer? #NoCourage

King and other House Republicans pushed a bill through on Friday that would shutter the program, which allows immigrants between the ages of 16 and 31 who have been in the U.S. since 2007 to apply for two-year permits allowing them to reside in the U.S. if they meet scholastic and civic guidelines and pay a $465 application fee. The bill is unlikely to gain traction within the Senate, or with President Barack Obama.

"This is not what I do," King replies, before taking his glasses off. Seconds later, he grabs Andiola's hand in an effort to cut her off.

"You're very good at English," he says.

"I was raised in the United States," Andiola replies.

Watch the discussion, as posted on Monday, below.