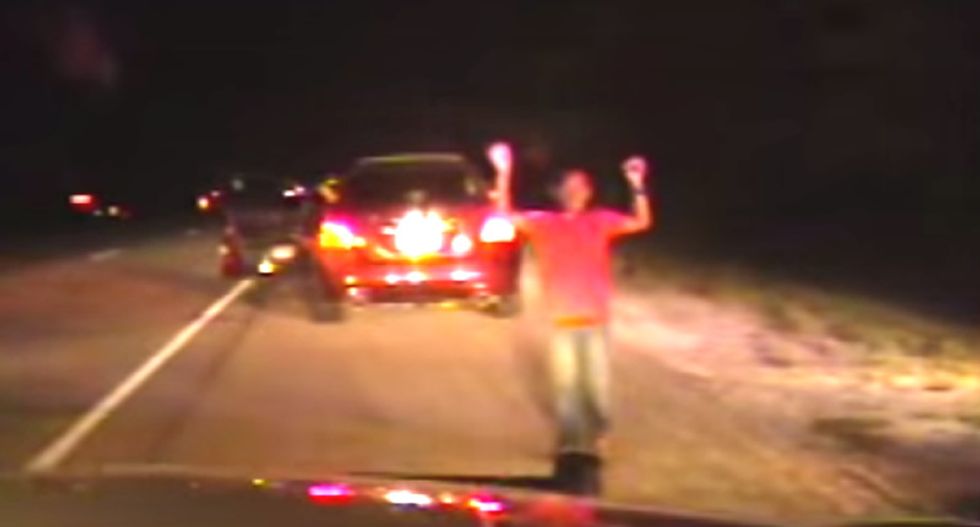 A Texas mother said that police mistook her and her four young children for a group of black males waving a gun out the car window, WFAA reports.

Police were responding to a 911 call about a tan-colored Toyota carrying four black males, one of whom was waving a handgun out the window -- which is why Kametra Barbour is confused as to why she and her four young children in a burgundy red Nissan Maxima were pulled over.

The dashboard camera shows that officers pulled Barbour over and ordered her to exit her vehicle with her hands behind her head. When she asked what was wrong, one of the officers said, "I'll tell you in a minute."

"What is wrong?" Barbour asked. "My kids!" The officer asked how old her children are, and she replied, "They're six and eight and ten, nine. What are we doing? What is going on? Oh my God, you will terrify my children."

The officer can be heard responding, "We got a complaint of a vehicle matching your description and your license plate, waving a gun out the window."

Eventually, Barbour's six-year-old son Ryan exited the car with his hands up. One officer can be heard saying, "Do they look young to you?"

Later, the officers can be seen trying to comfort the distraught children. One of the children asks, "Are we going to jail?"

Forney Police Detective Michael Clay said that given the nature of the 911 call, the officers' extreme caution was warranted.

Barbour told WFAA that she understands that the officers were in a developing situation that involved firearms, but said that police need "to make sure you have all the facts, because you can't just say, 'Okay, I'm sorry,' and then I'm over it. I can't. Every time I listen to and hear or think about it, it bothers you. I can't just say, 'I'm fine. It's okay. It's not a big deal.' It is."

Watch the entire incident captured by the dashboard camera on YouTube below.