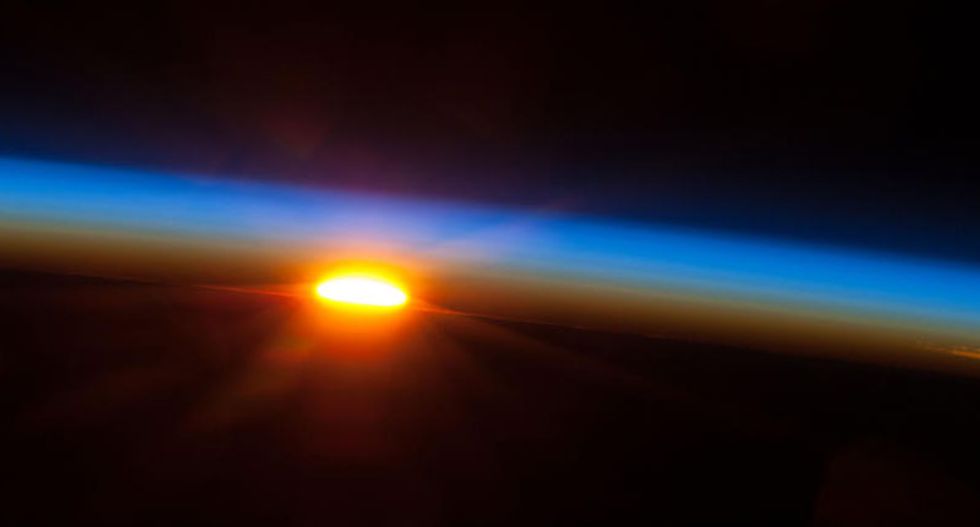 Sun rises over the earth (AFP)

A lab sited under 1.4 kilometres (4,500 feet) of rock has detected particles from the Sun that help to measure activity at the very heart of our star, scientists said Wednesday.

Deep beneath Italy's Apennine Mountains, the laboratory recorded low-energy neutrinos spewed out by the fusion of hydrogen protons, the mechanism by which the Sun's core generates energy, they said.

Called pp neutrinos, the particles are a tool for measuring the Sun's vital signs, the scientists reported in the journal Nature.

"By comparing the two different types of solar energy radiated -- as neutrinos and as surface light -- we obtain experimental information over about a 100,000-year timescale," said Andrea Pocar at the University of Massachusetts at Amherst.

"If the eyes are the mirror of the soul, with these neutrinos we are looking not just at its face, but directly into its core. We have glimpsed the Sun's soul."

Neutrinos are blasted out from the Sun at nearly the speed of light -- 65 billion of them hit every square centimetre (420 billion per square inch) of Earth's surface every second.

They zip through matter with almost no effect, but are hard to discern because their signature is so similar to particles emitted by normal background radiation in rocks.

To get around the problem, Italy built a facility at San Grasso beneath the Apennines, the chain that runs down the spine of the country, to shield detectors as much as possible from other radiation sources.

The lab's Borexino instrument comprises a steel sphere surrounded by a shield of 1,000 tonnes of ultra-pure water.

The sphere is filled with 300 tonnes of a purified hydrocarbon liquid, similar to benzene, whose surface provides a tiny scintillation when it is hit by a neutrino.

On the other hand, it takes between 100,000 and 200,000 years for residual energy from fusion to be transformed into photons -- the particles of light that reach us from the Sun.

Comparing the tallies of neutrinos and photons thus gives physicists a chance of seeing if solar output has changed during this time.

The good news is that the Sun has been stable.

The unique experiment "shows that solar activity has been practically unchanged for more than 100,000 years," said France's National Centre for Scientific Research (CNRS), whose scientists took part in the study.