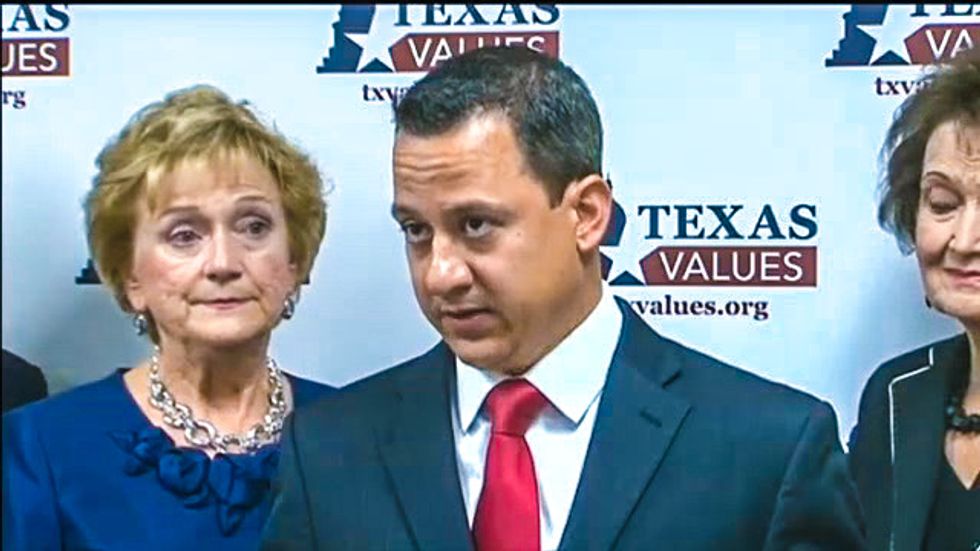 The leader of an anti-LGBT group who has joined with Texas Attorney General Greg Abbott to ban same-sex marriage had his own marriage end after his wife began a romantic relationship with another woman.

According to court documents obtained by Lone Star Q, Corrine Morris Rodriguez Saenz was dating another woman when she filed for divorce from Jonathan Saenz in 2011. Less than six months later, Jonathan Saenz took over as the president of the state's top anti-gay group, Texas Values.

Corrine Saenz told the court that she wanted to end her marriage on the grounds that it was “insupportable due to discord or conflict of personalities … that destroys the legitimate ends of marriage and prevents reasonable expectations of reconciliation.”

Jonathan Saenz initially asked the court to refuse to grant the divorce, and to bar “any unrelated adult, with whom the parent has an intimate, romantic, emotional, and/or dating relationship to remain in the presence of the children, including but not limited to Ercimin Paredes, a/k/a Ercilia M. Paredes.”

Paredes was reportedly Corrine Saenz's girlfriend, and the two worked together at as teachers at Becker Elementary School in the Austin Independent School District.

Nearly two years after the divorce battle began, Jonathan Saenz filed a counterpetition for divorce in May of 2013, accusing Corrine Saenz of adultery. The petition also asked that Paredes be permanently barred from access to the children.

The divorce became final on Aug. 1, 2013, and the Agreed Final Decree of Divorce made no mention of Paredes.

The Final Decree stated that both parents had the right “to direct the moral and religious training of the children.”

Earlier this year, U.S. District Judge Orlando Garcia ruled that Texas' ban on same-sex marriage violated the Equal Protection clause of the U.S. Constitution. Jonathan Saenz has been working alongside Attorney General Abbott, the Republican Party's nominee for governor, to overturn the decision.

"There is wide support for the state's rights and for marriage to remain between one man and one woman. That cuts across political lines, across faith lines and across demographic lines," Jonathan Saenz said earlier this month.