Witnesses: Shooting of MO teen began with cops telling him to 'get the f*ck on the sidewalk' 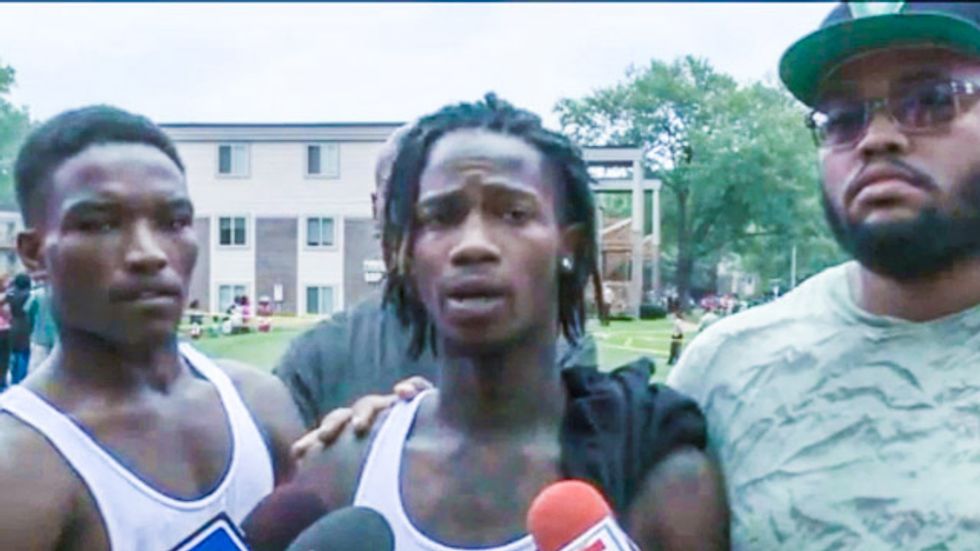 Conflicting accounts are slowly emerging about a Missouri teen who was stopped for walking in the middle of the road, and then was fatally shot by Ferguson police on Saturday.

Following the shooting of 18-year-old Michael Brown, police dispatched riot-control officers to deal with hundreds of protesters at the crime scene on Saturday night. KMOV reported that more than 100 police cars responded to the demonstration.

In a press conference on Sunday, St. Louis County Police Chief Jon Belmar said that the Ferguson Police Department had requested that his office take over the investigation.

Belmar confirmed that the teen was unarmed, and said that his "understanding" was that there was a "struggle over the officer's weapon" inside the police car.

"After that, the officer exited his vehicle, and there was a shooting where the officer, in fact, shot the subject," he explained.

Belmar added that the Ferguson Police Department would not have asked the St. Louis County Crimes Against Persons Unit to investigate if it was trying to hide something.

But witness Dorin Johnson, who was walking with Brown at the time of the incident, told KTVI that the teen was holding up his hands at the time that he was shot.

"A police officer squad car pulled up," Johnson recalled. "And when he pulled up, these was his exact words, he said, 'Get the f*ck on the sidewalk.' And we told the officer we was not but a minute away from our destination, and we would surely be out of the street."

Piaget Crenshaw said she witnessed Brown unarmed, and running "for his life."

"They shot him, and he fell," she said. "He put his arms up to let them know he was compliant, and that he was unarmed. And they shot him twice more, and he fell to the ground and died."

"This is another Trayvon Martin story," she added. "A young man died before his time because of brutality from a different race. It's racial profiling."