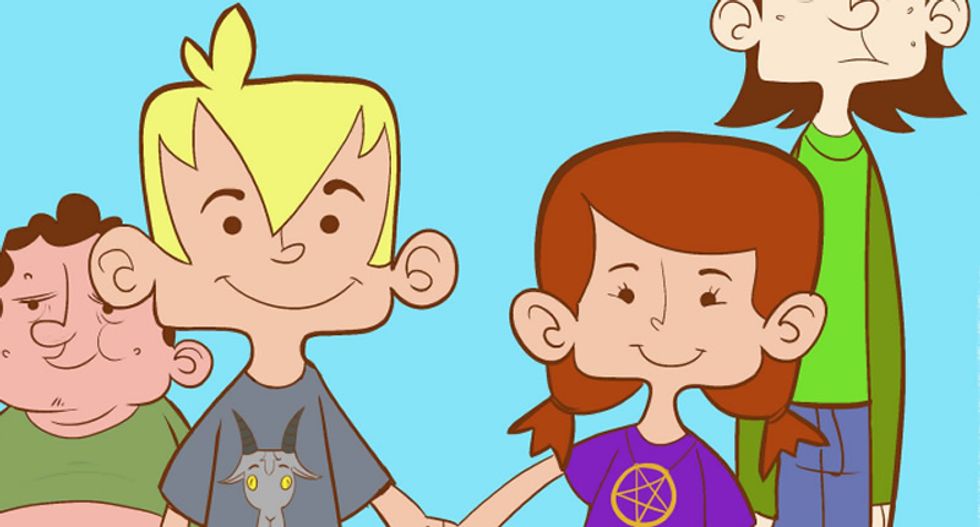 The Satanic Temple has responded to an Orange County, Florida decision to disseminate religious materials in public school by creating complementary materials that espouse the philosophy and practice of Satanism.

Last month, a Florida judge ruled that if the Orange County school district allowed Christian groups to disseminate Bibles and Christian-oriented religious materials in its schools, it would also have to allow atheist groups to do the same.

David Williamson of the Central Florida Free Thought Community -- who recently fought against Brevard County's attempt to ban atheists from offering invocations at public meetings -- sued the district over its initial unwillingness to allow atheist literature with titles like "Jesus Is Dead" and "Why I Am Not a Muslim" in the schools.

A judge dismissed that case after the school board decided to allow the materials.

The Satanic Temple took advantage of this decision, deciding to flood Orange County schools with a pamphlet entitled The Satanic Children's Big Book of Activities that contains kid-friendly Satanic lessons.

"These bullies are mad and afraid of things they don't understand," the instructions on the word-jumble reads. "Help Damian use inclusive language to defuse the situation.

The spokesman for the Satanic Temple, Lucien Greaves, explained that his organization "would never seek to establish a precedent of disseminating our religious materials in public schools because we believe our constitutional values are better served by respecting a strong separation of Church and State."

"However," he continued, "if a public school board is going to allow religious pamphlets and full Bibles to be distributed to students -- as is the case in Orange County, Florida -- we think the responsible thing to do is to ensure that these students are given access to a variety of differing religious opinions, as opposed to standing idly by while one religious voice dominates the discourse and delivers propaganda to youth."

The Satanic Temple made headlines earlier this year when it successfully petitioned the state of Oklahoma to allow it to erect a goat-headed Baphomet statue adjacent to a display of the Ten Commandments.

Greaves made it clear that, in both cases, his organization is only responding to provocations by the Christian community.

"“Even as we prefer public policies respecting secularism, we feel that opportunities -- such as this -- to establish an equal voice for contrasting religious opinions in the public square, tend to favor marginalized, lesser-known, and alternative religions," he said.

"I am quite certain that all of the children in these Florida schools are already aware of the Christian religion and it’s Bible, and this might be the first exposure these children have to the actual practice of Satanism. We think many students will be very curious to see what we offer."