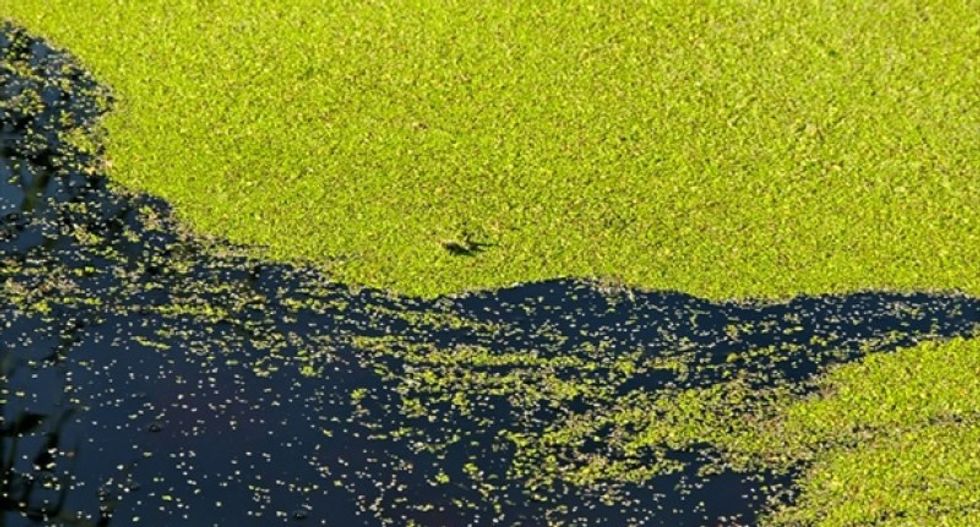 "Green algae blooming in a pond" on Shutterstock

Tiny marine algae can evolve fast enough to cope with climate change in a sign that some ocean life may be more resilient than thought to rising temperatures and acidification, a study showed.

Evolution is usually omitted in scientific projections of how global warming will affect the planet in coming decades because genetic changes happen too slowly to help larger creatures such as cod, tuna or whales.

Sunday's study found that a type of microscopic algae that can produce 500 generations a year - or more than one a day - can still thrive when exposed to warmer temperatures and levels of ocean acidification predicted for the mid-2100s.

The Emiliania huxleyi phytoplankton studied are a main source of food for fish and other ocean life and also absorb large amounts of carbon dioxide, the main greenhouse gas, as they grow. Their huge blooms can sometimes be seen from space.

"Evolutionary processes need to be considered when predicting the effects of a warming and acidifying ocean on phytoplankton," according to the German-led study in the journal Nature Climate Change.

Thorsten Reusch, an author of Sunday's study at the GEOMAR Helmholtz-Centre for Ocean Research in Kiel, cautioned the findings about were only for one species of algae in a laboratory test, in water with no predators or disease.

He said it was not an argument that global warming was less serious than expected. Longer-lived creatures, from fish to shellfish, would not be able to evolve their way out of trouble.

A U.N. panel of scientists says that man-made greenhouse gases emitted into the atmosphere are warming the planet. And carbon dioxide, the main gas, turns into a weak acid when it dissolves in water, slowly acidifying the oceans.

Last year, a study by 540 experts said that acidification was a silent storm in the oceans and threatening life from coral reefs to fish stocks. It said the seas could become 170 percent more acidic by 2100 compared to levels before the Industrial Revolution.

Sunday's study showed that algae, taken from water 15 degrees C (59 Fahrenheit) warm off Norway, tended to evolve to a smaller size in higher temperatures in experiments lasting more than a year but also grew faster, producing a larger mass overall.

Stephen Palumbi, a professor of biology at Stanford University, said there was evidence that some coral reefs or sea urchins could be more resilient than expected to ocean changes.

"What we don't know is how far these mechanisms will go. I suspect personally that they will not solve the future climate problem because climate is changing far too fast."

"But perhaps these abilities will give some important marine life a few more decades than we previously thought," he said.

A U.N. panel of scientists says it is at least 95 percent probable that manmade emissions of greenhouse gases are the main cause of global warming since 1950, causing more heatwaves, droughts and rising sea levels.

Opinion polls, however, indicate that many voters believe that natural variations are to blame. The mismatch between scientific and public opinion complicates a plan by almost 200 governments to work out a deal to limit global warming at a summit in late 2015 in Paris.