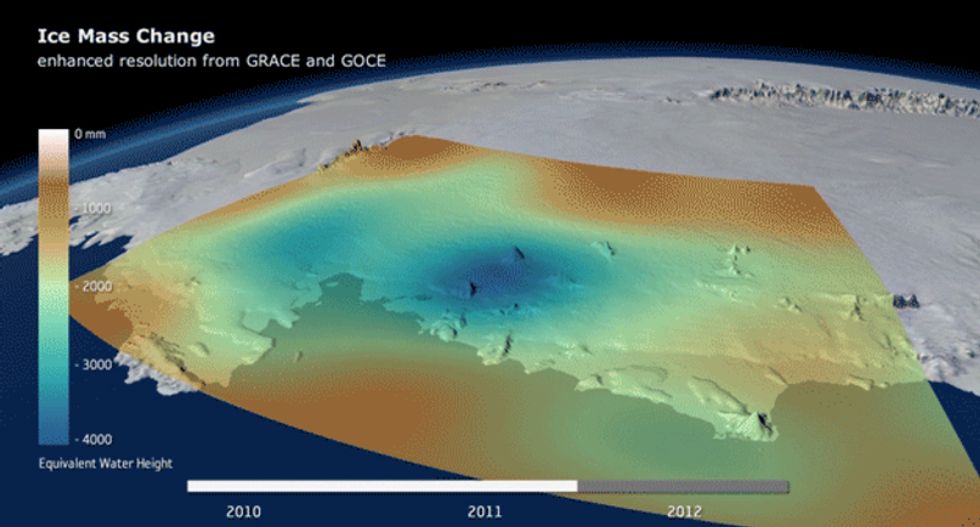 This story was originally published at Climate Central.

The West Antarctic Ice Sheet is headed toward “unstoppable” collapse according to recent studies. A new visual released by the European Space Agency show what the start of that collapse looks like both for the mass of the ice sheet and its signature on the planet’s gravitational field.

We think of gravity as a constant, holding us in place on the planet. But the reality is there are small changes in gravity all over the globe. Not enough that you’ll feel lighter on your feet in one place compared to another, but enough that scientists can use satellites to measure the differences. Those measurements can, in turn, help us better understand the world around us, from how earthquakes shift land to how fast ice sheets are receding and what that means for sea level rise.

The measurements released by the European Space Agency on Friday fall into the latter category. They show gravity in the region is decreasing as the West Antarctic Ice Sheet has melted faster and faster over a 3-year period from 2009-12, sending more water into the sea.

This region of the ice sheet has been intensely studied by scientists and recent research indicate melt could be “unstoppable.” The melt of that section of the ice sheet would raise sea levels 10-13 feet, though the timetable for that happening is centuries, not single years or decades.

The new measurements will help scientists refine their understanding of what’s happening in the land way down under. Scientists are looking to expand the analysis to all of Antarctic to get a better sense of how ice is moving there. Recent estimates of Antarctic ice sheet loss are in the range of 125 cubic kilometers a year, which accounts for about 10 percent of observed sea level rise.